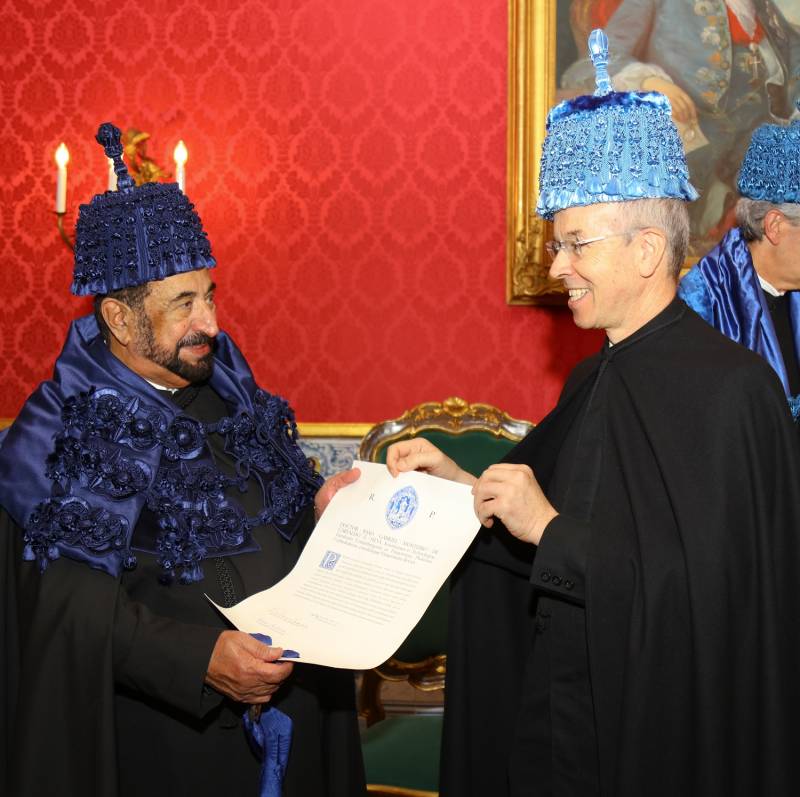 SHARJAH - The University of Coimbra in Portugal has honoured His Highness Sheikh Dr Sultan bin Muhammad Al Qasimi, Member of the Supreme Council Ruler of Sharjah, with an Honourary Doctorate (Honoris Causa Doctorate Degree) in recognition of his efforts for supporting culture, literature and history on local and international fronts.

He was also honoured in appreciation of fostering and developing Sharjah as a platform that brought global cultures together, and established new frontiers to respect and tolerance through diversity and appreciation of differences, said a press release issued on Wednesday.

The University of Coimbra described His Highness Sheikh Dr Sultan bin Muhammad Al Qasimi as “the man who brings cultures together” through his unparalleled efforts and achievements in many fields such as culture, history and literature. Through these achievements, His Highness The Ruler of Sharjah unveiled a series of significant historical facts on the historic relationships between numerous nations, and how they developed over time.

The University of Coimbra underscored that honouring His Highness the Ruler of Sharjah is to honour the symbol of human cultures who played a critical role in strengthening the fabric of cultural relationships between nations.

The University of Coimbra, one of the oldest universities in Europe and the world, and the oldest in Portugal, was established in 1920, as one of the very first 15 European universities. It is one of the largest institutions of higher education and research in Portugal, and was added to the World Heritage Sites List of the United Nations Educational, Scientific and Cultural Organization (UNESCO).

As mandated by the laws of the University of Coimbra, the Honourary Doctorate is the highest scientific and honorary degree, which the Deans honour personalities who have made exceptional contributions in the scientific, literary or cultural fields.

Since its inception in 1920, the university gave this degree to 190 people from around the world, including António Manuel de Oliveira Guterres, Secretary-General of the United Nations, and Jean-Claude Juncker, President of the European Commission.

His Highness The Ruler of Sharjah met members of the University Senate and scientific council, and toured the university campus. His Highness Sheikh Dr. Sultan bin Muhammad Al Qasimi underscored that the culture of any nation is the sole constant power that does not change, no matter how its political and economic environment change.

His Highness the Ruler of Sharjah pointed out that the power of culture has the upper hand over the culture of power in impacting nations’ consciousness and historic memory, because human memory has a tendency of erasing the bad recollections and treasuring the beautiful and positive ones.

His Highness noted that scientists, authors, philosophers, historians and artists are the inspiring future and the eternal beautiful bright light for the sustainability of any culture.

In a speech at the honouring ceremony, His Highness Sheikh Dr. Sultan bin Muhammad Al Qasimi commended the efforts of the Rector, Deans, and Members of the University Senate, aimed at supporting human culture and enhancing cross-cultural communication between nations.

“It is a great pleasure to be at the historic campus of the University of Coimbra.  It is also a privilege to meet such distinguished assembly of academics and scholars. I am truly honored to receive the prestigious honoris causa doctorate degree from the University of Coimbra, the leading University in Portugal, and one of the oldest Universities in Europe,” said His Highness The Ruler of Sharjah.

“Some years ago, I spent some time at the Municipal Library of Porto examining the diary of Vasco da Gama’s first trip to India.  More recently, five years ago, the Lisbon Academy of Sciences gave me the honour and elected me to the membership of the Academy. With today’s added honour from the University of Coimbra, my ties to Portugal are stronger and forever lasting,” added His Highness.

“The in-depth study of the collected historical materials from different sources has been fascinating and captivating, and became the foundation of my successive doctoral research at the University of Exeter and later Durham University in the United Kingdom. My passion and bond with history is solid. I am still writing books about the people and the events that shaped the social, economic, and political landscape of our region. The historians among you certainly recognize that the bond between history and the true students of history lasts a lifetime, and I am a student of history,” His Highness The Ruler of Sharjah remarked.

“The world around us is constantly changing. Our region in particular has been on a fast-paced development journey for several decades now. The development spectrum is broad and includes social, economic, cultural, and technological fields and among others,” His Highness The Ruler of Sharjah added.

“It is of prime importance to recognise that the success of our development efforts was the establishment of quality institutions for higher learning. The collaboration with internationally recognized universities from Europe, North America, and Australia, enabled us to discover and explore two high quality universities in a record time by any standard,” explained His Highness Sheikh Dr. Sultan bin Muhammad Al Qasimi.

“The two Universities offer bachelor, masters, and doctoral degree programs in a wide range of fields. The researchers in our universities and research institutions are currently engaged in applied research in many areas relating to the progressive development of our societies and communities,” His Highness concluded.

At the honouring ceremony, the University of Coimbra commended the role of His Highness the Ruler of Sharjah in promoting culture, supporting intellectuals, arts and theatrical performances in the Arab world. The university expressed their appreciation of the efforts of His Highness Sheikh Dr. Sultan bin Muhammad Al Qasimi aimed at protecting the global human cultural legacy regardless of its location and intellectual or ideological indications.

The University of Coimbra pointed out that under the directives of His Highness, Sharjah has become an incubator of the world’s most important humanitarian and cultural events, and they commended the literary, cultural and historical publications written by His Highness, highlighting that they attribute value to the Arabic and world literature.

His Highness Sheikh Dr. Sultan bin Muhammad Al Qasimi has published an array of literary, historical and theatrical works, such as ‘Tale of a City’, ‘Under the Flag of Occupation’, ‘The Conflict between Power and Trade in the Gulf (1620-1820)’, ‘Economy of the Emirates of Arabian Coast in the 19th Century’, ‘Selected Speeches’, ‘About the Theatre’, (Nashij Al Wada’), ‘A Message to the Theatre People’, as well as a number of plays, such as ‘Daesh wal Ghabra’, ‘Aliyaa and Osam’, ‘The Black Stone (Al Hajar Al Aswad)’, ‘Turgot’ and ‘Alexander the Great’, among others.

The new merit attributes to His Highness’s portfolio of academic and honourary certificates that were presented by the world’s most significant scientific and cultural centres.