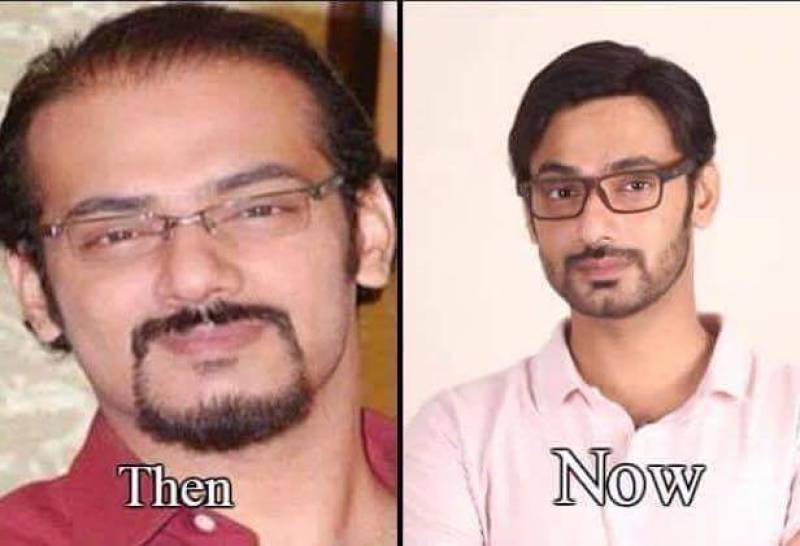 LAHORE - Actor Zahid Ahmed, who rose to fame through Hum TV's drama serial Marham, has finally revealed the story behind his photo being circulated online. The photo showed his two pictures with tag Then and Now.

In a post on his Facebook page, Ahmed revealed the story of his life, saying: " just like every picture, you never get to know the whole story...apart from getting a solution for my hair loss and being overweight, there's much more to my story."

He went on to say that he was originally working at an IT company as Chief Operating Officer in 2011. The same year he got married and went to Malaysia for his honeymoon, but upon his return to Pakistan, he came to know that the company he worked for was actually a fraud. This left him married and jobless.

During the following year, he also got injured his spine in an unfortunate accident. However, he did not quit and found a job at a Radio station. In the same year, the actor underwent a spinal surgery at PIMS and became able to walk again.

In 2013, he started working for PTV and later for a theatre in which he played the character of Muhammad Ali Jinnah - and to play the role he had also had to undergo hair transplant.

Just one year later, he also left this job and was once again jobless, homeless and a person whose marriage bond was on the verge of breakage. However, eventually, Zahid AHmad was noticed by Hum TV and ultimately he was picked for the drama Marham.

"If this story doesn't motivate you, I don't know what will. I am Zahid Ahmed, I am passion and I am the future," he concluded the story.

It is also worth mentioning here that Zahid Ahmed is also playing a lead role in Hum TV's drama serial Zara Yad Kar.