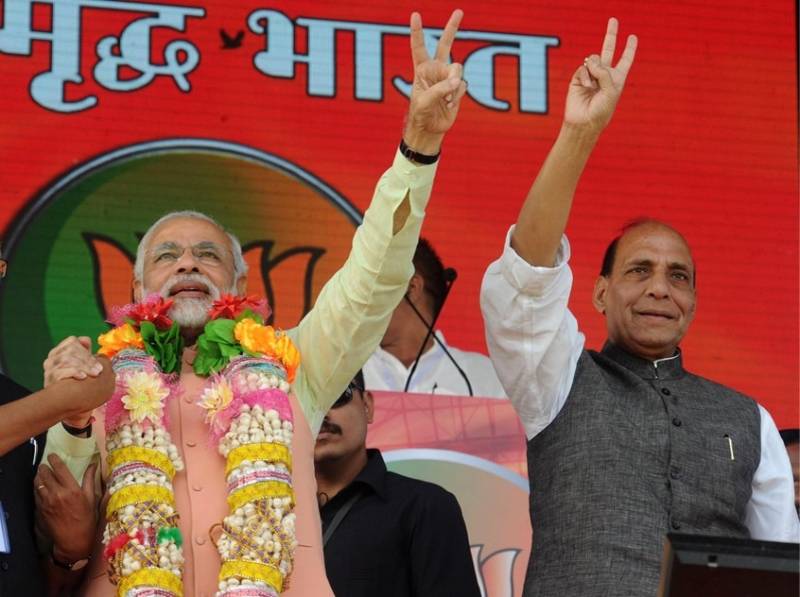 Whenever the lid blows off the Kashmir pressure cooker, a tsunami of public fury will unleash itself. India knew it and sees it even better now. If the curtain of fear falls and people take to the streets, the military will take the trigger-happy course. Either way, the strategists in India ponder as to how and when will Pakistan respond? Islamabad has repeatedly warned the world of a nuclear war, waiting to break out.

Though US President Donald J Trump walked back on his mediation offer, he declared Kashmir as a bilateral issue between India and Pakistan. Indian premier Narendra Modi concurred, deceitfully. The US leader ignored human rights violations in Kashmir, unprecedented for their scale and severity even from the colonial-era standards.

Around the same time came the stern reminder from Prime Minister Imran Khan, “Whether the world joins us or not, Pakistan will go to any lengths and its people will support [Kashmiris] till their last breath.”

Delhi has taken Imran’s call quite literally. And for the first time, the country has officially shelved no-first-use (NFU) doctrine. Since 1999, it vowed to not nuclearize a conflict with a similarly-equipped foe i.e. Pakistan and China. Islamabad outrightly maintained otherwise. Beijing has so far adhered to NFU.

Did Pakistan believe that India would adhere to NFU doctrine? Not really! Islamabad’s deterrence capability was evolved considering all possible scenarios. Until January 4, 2017, the idea was part of chatter amongst the strategic community and the media.

Indian army chief General Bipin Rawat exposed the masked reality: “The Cold Start doctrine exists for conventional military operations. Whether we have to conduct conventional operations for such strikes are a decision well-thought-through, involving the government and the Cabinet Committee on Security.”

Fast forward to August 16, India’s Defence Minister Rajnath travelled to the country’s only nuclear testing site to pay homage to former premier late Atal Bihari Vajpayee and use the occasion to end India’s NFU policy. To end any ambiguity or confusion, he articulated Delhi’s revised policy via twitter too. Evidently, India was almost ready to declare its formal shift to first-use back in 2016 when the then defence minister, Manohar Parrikar, stated that India needed to take a more ‘responsible’ approach to nuclear weapons than the callous one of ‘no first use.’

If the policy of no-first-use was farce and Pakistan knew so, then what exactly does India gain? Rajnath aims to double down on Modi’s harsh narrative against Pakistan for domestic consumption. Ideally, the doctrinal shift from no-first-use necessitates substantial changes to existing nuclear structures, deployment and command and control arrangements. India won’t need much of the above, so believes Pakistani strategic community. They see Delhi’s nuclear arsenal to swell, which was estimated to be 10 or 20 nuclear warheads short of Pakistan’s. Given its non-IAEA enrichment facilities, the stockpiles and warheads are said to be considerably higher than otherwise estimated. The Modi government will be sanctioning the development of more delivery systems as well as warheads.

Secondly, the adoption of the first-use doctrine feeds into the Pakistani narrative of Jammu & Kashmir being the nuclear flashpoint. Imran Khan has hammered the point repetitively at almost every opportunity of interaction with the global leaders as well as media. The point would have echoed too during Modi’s meeting with Trump on August 27. The new policy neither adds to India’s options nor discomforts her enemies. In a kneejerk reflex, China is not going to revisit its nuclear posture.

It is a fundamental question to ask as to why India deserts its ingenious ‘Cold State’ doctrine after investing colossal intellectual, military and material resources. What rendered it obsolete? The answer lies across the Line of Control and the international border.

The Cold Start doctrine was envisaged to deny Pakistan the justification to opt for nuclear first-use through rapid, fatal but limited attacks. Indian strategists reportedly planned to mobilize eight ‘battle divisions’, ranging 30,000 to 50,000 troops, independent armoured and mechanized brigades along with air force (and naval aviation if needed) for single or multiples strikes in a limited area till the objective is achieved in a span of 72 to 96 hours. The doctrine premised that blitzkrieg-style attacks would confuse the Pakistani force and eventually breaking their formational cohesion and situational awareness.

Though never officially announced or publicly debated, India could not hide it from Pakistan. Islamabad prepared effective counter-measures and fashioned its arsenal to thwart the plan, fashioned after a not-so-successful strategy of Nazi Germany.

Development of tactical nuclear weapons is one of the straightforward answers. For instance, development of the world’s shortest-range nuclear-capable ground-to-ground and air-to-ground Nasr missile will be used for counterforce use. Raad, Abdali and Ghaznavi are some of the many options Pakistan developed to obstruct the Cold Start doctrine. Despite consistent and targeted shelling on Pakistani post along the Line of Control, the retaliation India has been facing was significantly punitive. Despite terrorist attacks, which India pointedly blamed at Pakistan without much ado, the Cold Start could not be operationalized. It turned out to be a strategic liability than a trump card. The ‘surgical strikes’ were never launched except in the media while the events unfolding after February 26 Balakot strikes exposed further holes in Indian strategy and wartime readiness. Rajnatht’s policy statement in Pokhran is, in fact, an open admission that the Cold Start is too cold for India to work; thus, the country is opting for less ambiguous nuclear posturing.

Enter the next nuclear arms race

What has been constant all along is the army chief, Bipin Rawat, someone who has commanded troops in the northeast as well as Jammu & Kashmir. His appointment was more for more political reasons than professional. The man is not retiring in December but has been tipped for elevation to Chairman Defence Staff, an office being revived after two decades.

Bipin who admitted the existence of Nuclear Start doctrine two years ago and warned Pakistan of ‘proactive strategy options’ will now be overseeing an overtly more aggressive nuclear posture.

India’s first-use policy won’t serve its strategic objective of denying Pakistan second-strike capability. With Islamabad’s completion of the triad, a salvo of nuclear warheads may not be promising enough for Delhi’s safety from a thermonuclear blast. Yet still, the BJP sees nuclear weapons as warfighting instruments instead of deterrence.

There seems no rationale for Pakistan to continue its separation policy i.e. keeping the delivery systems unarmed of the nuclear payload. Islamabad will not only be keeping the nuclear devices launch-ready but also duly dispersed for operability.

India has initiated a new nuclear arms race; and is more capable of developing them now than it has ever been, thanks to overt western cooperation initiated with the signing of the Agreement 123 with the United States.