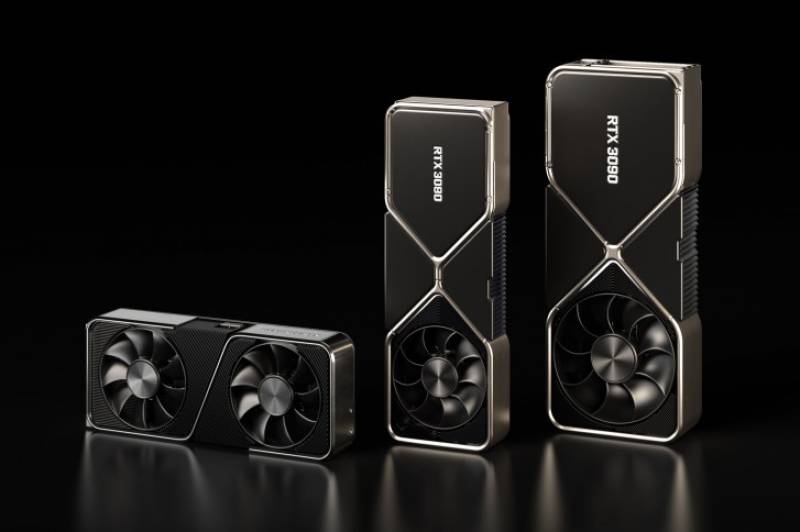 After months of heavy leaks, Nvidia has finally announced its upcoming 3000 series GPU’s. The new series is launching 2 years after the release of the 2000 series. Gamers and enthusiasts have long awaited this release as the competition in the gaming market grows. Upcoming consoles from Sony and Xbox have extremely powerful internals, and many wondered if Pc gaming could keep up with the price to performance comparison.

The new generation of graphics cards by Nvidia are built on the new AMPERE architecture which the company showcased earlier this year. Nvidia claims the new graphics cards offer twice the performance over the previous generation while being 1.9 times more efficient. All three announced cards are built on Samsung's 8nm custom process node, which is a significant jump over the previous generation. The GPU’s will feature all new Shader cores, 2nd Gen Ray Tracing cores and 3rd generation tensor cores. The new GPU’s will feature faster GDDR6X memory from Micron and will feature NVIDIA’s new RTX IO which integrates multiple storage technologies.

The new RTX 3070 GPU according to NVIDIA is faster than the current generation RTX 2080ti. The card is equipped with 8GB of GDDR6 vram with 20 Shader teraflops, 40 RT teraflops and 163 Tensor teraflops performance. The card will be available in October for $499 and is the best value GPU by NVIDIA.

The RTX 3080 is the new flagship GPU by Nvidia. The GPU is equipped with 10GB of GDDR6X memory with a massive increases of 30 Shader teraflops, 58 RT teraflops and 238 Tensor teraflops performance. Nvidia promises double the performance over the last generation RTX 2080ti. The card will be available on September 17th for $699.

The RTX 3090 is Nvidia’s replacement for its enthusiast level TITAN GPU’s. The 3090 is labeled as the ‘BFGPU’ the biggest and fastest GPU. The GPU is a behemoth, it is a 3 slot card and includes a silencer which keeps it 10 times quieter than the RTX 2080ti, according to NVIDIA. The GPU is equipped with a massive 24GB of GDDR6X memory, and NVIDIA claims it is the first GPU to enable 8k 60 gaming. The GPU has 36 Shader teraflops, 69 RT teraflops and 285 Tensor teraflops performance. The GPU will be available on September 24th for a massive price of $1499. The price might seem a lot but the previous generation TITAN GPU was priced at $2500.

The new 3000 series is a massive upgrade over the previous generation, and NVIDIA has surpassed market expectations with this announcement. The new cards might seem expensive, but with the massive performance boost over the last generation they are one of the best value GPU’s right now. AMD’s upcoming BIG NAVI GPU needs to pull a rabbit out of the hat if they want to compete with NVIDIA this generation. NVIDIA has really set the bar for upcoming GPU’s, and this is great news for consumers as better competition leads to better products.