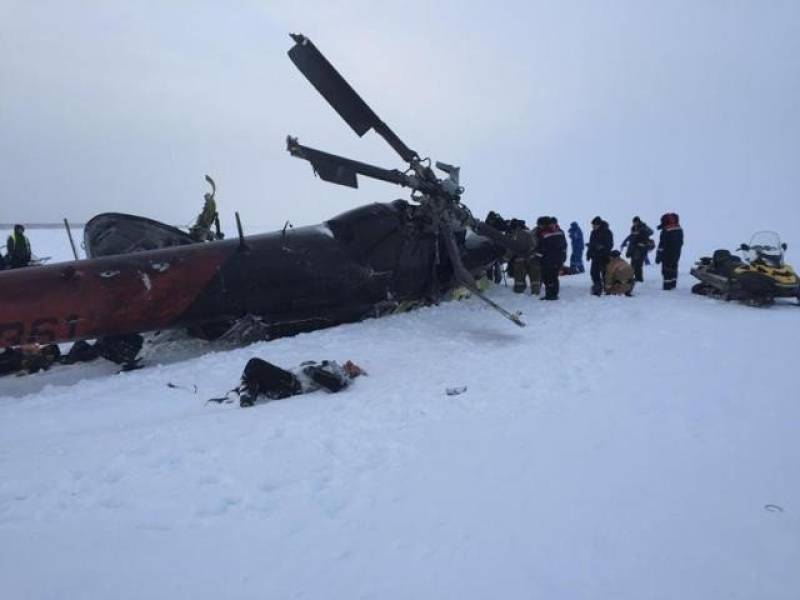 MOSCOW - Russia on Saturday said 18 people were killed when a helicopter crashed on its way to an oil station in northern Siberia in the early hours of the morning.

The Russian Transport Ministry said the Mi-8 helicopter carrying three crew members and 15 passengers crashed when it collided with machinery carried by another helicopter soon after take-off.

It added that the second helicopter landed safely and that the accident took place in "normal" weather conditions.

"The first take-off was carried out by a Mi-8 with an external cargo suspension without passengers on board, the second take-off was performed with passengers who were workers on shifts at the oil station," the ministry said in a statement.

"According to preliminary information, the Mi-8 carrying passengers for reasons unknown collided with the external suspension of the second helicopter after take-off. As a result it fell, was destroyed and burned," it added.

The helicopter was operated by Russian national airline Utair, which has its head office in Khanty Mansiysk airport in western Siberia.

In a statement issued on its website, Utair said the crash took place at 05:43 Moscow time (0243 GMT) after taking off from a helipad at the Vankor oil and gas field, in the Turuhansk district of the Krasnoyarsk region.

The oil field is operated by Russian national oil company Rosneft through its subsidiary Vankorneft.

Utair said the helicopter was made in Russia in 2010.

It added that the pilot was born in 1985 and was trained at the Omsk Aviation School in southwestern Siberia.

The airline said it sent its specialists to the site of the crash.

Russia's transport ministry said it created a commission to investigate the crash and that the vice director of the Federal Air Transport Agency was on his way to the site.

The country's Investigative Committee said it opened a criminal investigation into the crash.