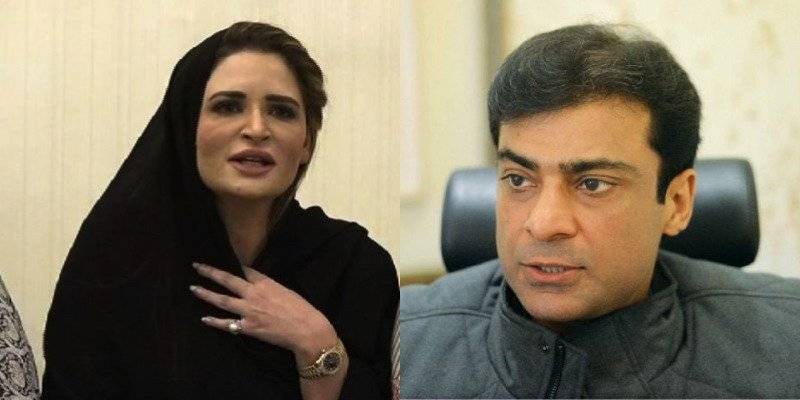 LAHORE - Ayesha Ahad, the woman who claims to be wife of former Punjab chief minister Shehbaz Sharif's son Hamza, registered another complaint regarding alleged kidnapping against the latter.

In the complaint filed on Sunday night, Ahad accused Hamza of violence, threats to life, and usurpation of possessions including jewelry, mobile phone, and purse. She also nominated Shehbaz's son-in-law Ali Imran in the complaint.

In the fresh complaint, Ayesha Ahad alleged that people sent by Hamza forcefully confiscated her laptop, nikah nama (marriage contract), and other documents of importance when her driver took her to an far-off place; the complaint is being reviewed by the Lahore Cantt police.

On Saturday, the Chief Justice of Pakistan Mian Saqib Nisar, had ordered the Punjab Inspector-General of Police (IGP) Arif Nawaz Khan to register a case against Hamza Shehbaz and others against those allegedly involved in abusing Ayesha Ahad.

In her plea before the top judge, Ahad had asserted that she and her daughter faced danger from Hamza Shehbaz, following which the apex court summoned the former lawmaker.

However, as Hamza was out of country, he failed to turn up, following which a first information report (FIR) was registered against him, a member of the Pakistan Muslim League-Nawaz (PML-N), and five others at the Islampura police station.

Charges against the accused had included violence, robbery, usurpation, vandalism, threats to life, and attempted rape.

A police official had said the case had been filed under the Pakistan Penal Code Sections 342 (wrongful confinement), 506 (criminal intimidation), 337 (hurt and injuries), and 354 (molestation with sexual motive), as well as the Code of Criminal Procedure Sections 149 (rioting armed with deadly weapon) and 511 (attempting to commit punishable offences). Ahad's prior complaint, filed in 2011, was also made part of the latest FIR.

On the other hand, Hamza had rebutted the claims, saying Ahad’s accusations were baseless and unfounded and that she had made the same accusations in 2014 in the court of law but was unable to substantiate her allegations.