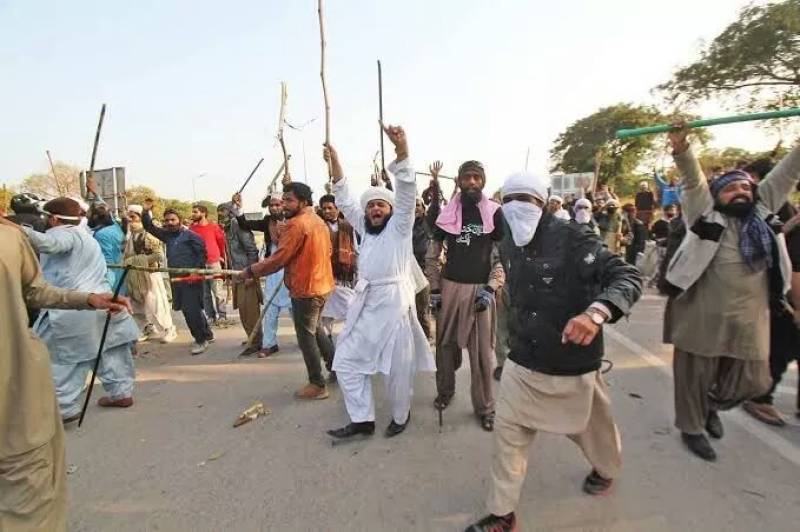 ISLAMABAD - A day after Tehreek-e-Labbaik Pakistan (TLP) wound up sit-ins and protest after reaching an agreement with the government on the matter of Asia Bibi blasphemy case, the federal government on Saturday ordered a “crackdown” against “miscreants” involved in damaging public and private properties and vehicles during the protests.

Thousands of TLP protesters brought Pakistan to a standstill during its recent protest, burning rickshaws, cars and lorries to protest against the acquittal of a Christian woman by SC who spent eight years on death row on false charges of blasphemy.

LAHORE - The leadership of Tehreek-e-Labbaik Pakistan (TLP) was booked on Saturday on charges of rioting and disrupting ...

The directives for action against the miscreants were issued by Minister of State for Interior Shehryar Afridi after he received a briefing from different agencies about the damage suffered by the government and people during the three-day protests by religio-political groups over the Oct 31 Supreme Court verdict acquitting Aasia Bibi of a blasphemy charge, says an official announcement.

It says that cases will be registered against “all those miscreants who under the guise of peaceful protests caused destruction to property and harmed unarmed citizens”.

The ministry has welcomed the stance taken by the Ulema that they were not involved in any violence and some “miscreants” were involved in the destruction caused to properties.

ISLAMABAD - Negotiations between the government and Tehreek-e-Labbaik Pakistan (TLP) have reached an agreement to end ...

The government says efforts are being made to identify the miscreants with the help of video footage.

The Cybercrime Wing of the Federal Investigation Agency (FIA) and the Pakistan Telecommunication Authority (PTA) have been directed to monitor and investigate provocative material being circulated on social media to incite hate. The head of the Cybercrime Wing and the PTA chairman have been instructed to obtain “forensic data of the miscreants.”

The interior ministry will initiate criminal proceedings against all those spreading extremist and hateful propaganda on social media.

Federal Information Minister Fawad Chaudhry while talking to media said it would be wrong to say that the government had surrendered before the protesters through the agreement.

Refusing to speak further on the matter, he said presently they were only doing firefighting and a prolonged strategy would be prepared to meet any such situation in the future and to establish the writ of the state in a more effective manner.