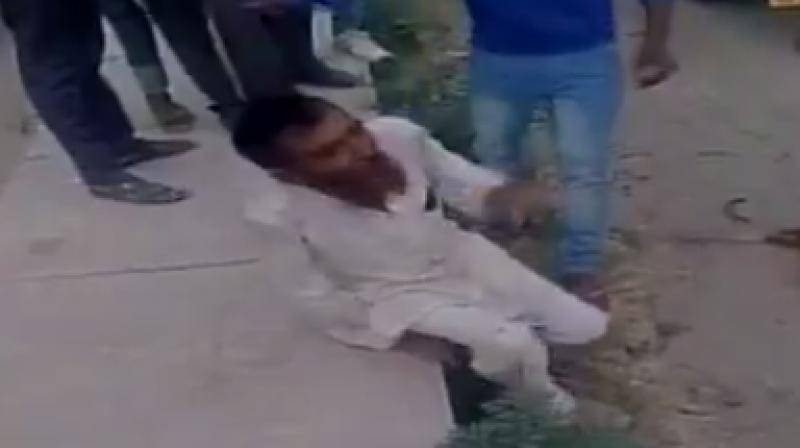 ALWAR- A Muslim man who was attacked by Hindu vigilantes while transporting cows in India breathed his last, police said on Wednesday.

According to reports, 55-year-old  Pehlu Khan was carrying scores of cows in his truck in Alwar in the western state of Rajasthan.

But, Pehlu was attacked by a mob and was brutally thrashed. He was shifted to a hospital but unfortunately, he succumbed to his injuries on Monday.

Khan was among a group of nearly 15 people that was attacked while transporting cows. Six of them who faced injuries were finally discharged from hospital.

Another man Azmat, who was travelling with Khan detailed the incident and confirmed that they had all the necessary documents.

"We were returning from a Saturday fair in Jaipur. I had bought two milch cows for Rs 75,000, and I had all the valid documents with me. We were not even trying to hide the cows, as we were taking them in a pick-up truck. At around 6 pm on Saturday, the gau rakshas stopped our vehicle and asked us our names. They allowed our driver, Arjun, to leave," said Azmat.

"I told them I had all the documents but they pulled us out of the vehicle and beat us up. They took away Rs 35,000 from me. I later lost consciousness and woke up in a hospital at around 1 am on Sunday," he noted.

A local cop identified the attackers as cow vigilantes associated with the VHP and the Bajrang Dal.

"Gau rakshas affiliated with the Vishwa Hindu Parishad and Bajrang Dal stopped four vehicles, near Jaguwas crossing on National Highway 8, on Saturday evening, alleging that they were illegally transporting bovines. These vehicles were coming from Jaipur, and were headed towards Nuh district in Haryana," Ramesh Chand Sinsinwar, SHO, Behror police station, was quoted as saying by the Indian Express.

According to Indian media, murder case has been registered over Khan's death and Rajasthan police have formed three teams to arrest the accused cow vigilantes. A reward of Rs 5,000 has also been announced for anyone who helps nab the six men accused of murder.

There have been scores of incidents in past where Muslim men faced the music for slaughtering or even carrying cows particularly due to the fact that cows are considered sacred in India.

Indian prime Minister Narendra Modi in August last year, slammed the cow vigilantes saying that he was angered by their assaults.

"Some people who have opened their shops in the name of cow protectors, I feel anguished by them. Gau sevaks and Gau protectors are both very different," Modi had said.