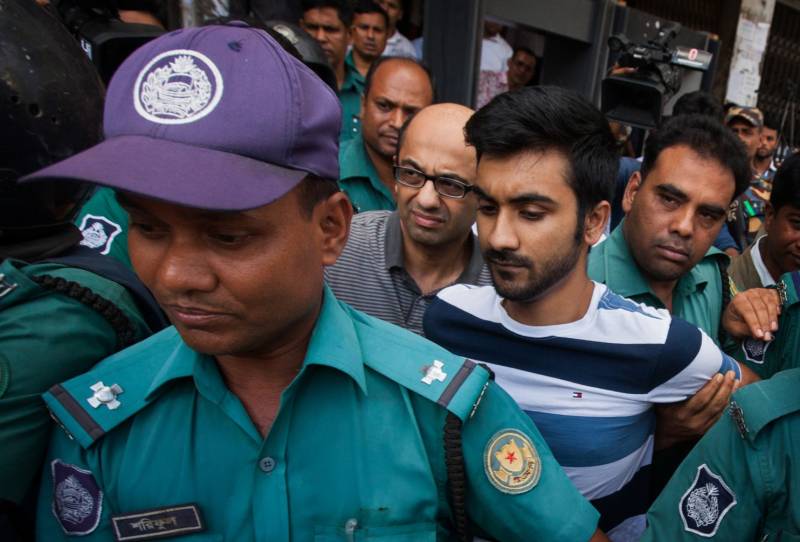 DHAKA (News Desk) - Bangladesh has confirmed that the police have arrested as many as two men on the allegation of their involvement in the Dhaka restaurant siege which killed 22 people including foreigners in July this year.

Police spokesman, Masudur Rahman, said that the accused, Hasnat Karim and Tahmid Hasib Khan, were brought forward in the court on Thursday and were given into legal custody of the police for eight days for further interrogation.

Meanwhile, the families of the arrested suspects have alleged that the two people were present inside the Dhaka Cafe during the terrorist attack and that the police had taken them away immediately after the end of the siege. However, officials never confirmed their detention until Thursday when they were presented before a local court.

According to The Washington Post, Hasnat Karim also holds British nationality while the second suspect Tahmid Hasib Khan is a student at Canada's University of Toronto.

A New York-based human rights organisation, which had requested the publication of the news of their arrest in July as well, claimed that Karim was present in the restaurant at the time of the attack along with his wife and two daughters to celebrate the birthday of their daughter.

However, the police officials maintained that they had photographs showing Karim smoking on the rooftop of the cafe's building with two of the attackers standing behind him. One of the attackers was also identified as his student.

Another video recorded by a South Korean man from a nearby apartment also showed Karim talking to the attackers during the siege of the cafe.

About the background of Hasnat Karim, the Bangladeshi media reports said that he lived in the United Kingdom for nearly 20 years and returned to Bangladesh only some years ago, where he started teaching at a private university in Dhaka initially but later started his own business.

He was also investigated by the Bangladeshi authorities for alleged links with the banned Hizbul Tehrir group - which also seeks the establishment of Islamic Khilafah.

Following the latest developments, the team investigating the Dhaka attack has also said that they will thoroughly look into the possibility of the Islamic State militant group's connection with the siege.

On July 1 this year, as many as five armed men attacked the Holey Artisan Bakery restaurant in Dhaka and killed 20 people, holding others inside as hostages. Forces killed the attackers and rescued the remaining 13 hostages alive on July 2. The killed included nine Italians, seven Japanese, three Bangladeshis and one Indian.

The attack was immediately claimed by the Middle East based Islamic State militant group, however, the Bangladeshi officials had said that the local militants were behind the cafe siege incident. The country also dismissed the reports of the existence of ISIS group on its land.