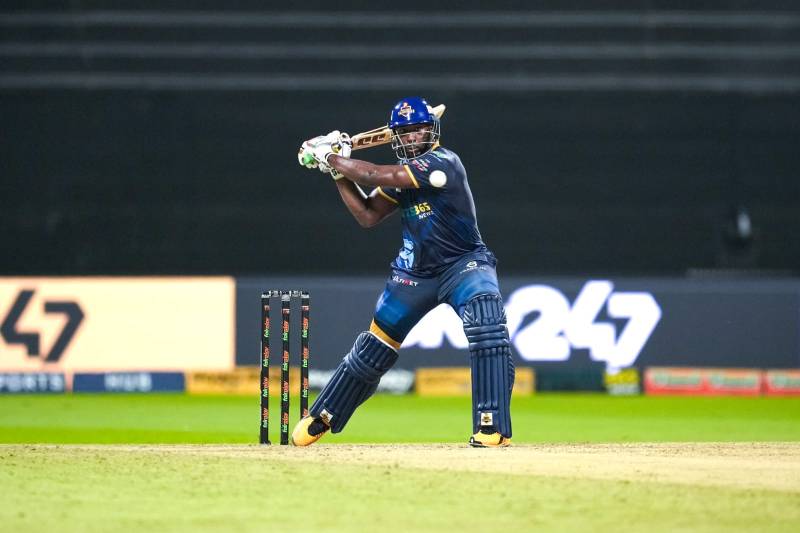 Andre Russell’s power-packed knock of 63 and skipper Nicholas Pooran’s unbeaten 38 helped defending champions Deccan Gladiators reach the final of the Abu Dhabi T10 beating Samp Army by 8 wickets. Deccan Gladiators will take on New York Strikers in the final on Sunday at the Abu Dhabi Zayed Cricket Stadium. Russell’s 63 came off 32 balls with seven boundaries and four sixes. Pooran’s unbeaten 38 off 12 balls had five boundaries and two sixes, and they won with two balls to spare in the Qualifier 2 match.

Samp Army had posted 119 for 2 through their skipper Moeen Ali’s stupendous unbeaten 78 off 29 balls with six sixes and four boundaries, but unfortunately his knock went in vain.

Deccan Gladiators won the toss and elected to field. Samp Army openers Johnson Charles and skipper Moeen Ali took 12 runs off the first over from Sultan Ahmed. This included an elegantly driven boundary by Charles through the gap between point and cover. The second over from Josh Little was expensive as Moeen Ali not only hit two consecutive boundaries off the first and second deliveries but also a six off the fourth and a boundary off the fifth. Nineteen runs came off that over.

Zahir Khan picked the prize wicket of Charles with the third ball of the second over stumped by Nicholas Pooran. In fact, Charles coming out to hit, misread the googly only to be stumped for 7. Odean Smith bowled a tight fourth over giving away only five runs. Shimron Hetmyer hit Tabraiz Shamsi for a six off the fourth ball to mid-wicket. With the last ball of that over, Shamsi trapped Hetmyer leg before for 10. At the half way mark, Samp Army were 46 for 2.

The sixth over saw Moeen Ali trying to accerlate the run flow hitting Smith for two boundaries off the second and fifth ball and take 14 runs off that over. The seventh over from Zahir Khan tied down both  David Miller and Zahir Khan. Except for Miller hitting Zahir Khan for a boundary to deep cover no other boundaries came off it.

Three overs to go and score stood at 69 for 2. Moeen Ali hit Andre Russell for two consecutive sixes off the second and third deliveries. He also hit the last ball for a six to reach his half century in 22 balls. Twenty-two runs came off that over from Russell. The first six of the eighth over was hit by Moeen over extra cover, the second pulled over mid-wicket and the last ball six was also pulled over mid-wicket.

The ninth over from Tabraiz Shamsi saw him giving away only singles from the first four balls but Moeen Ali hit the fifth for a six to over extra cover and also the last ball for another six over long off. Zahoor Khan, who bowled a brilliant last over in the eliminator against  Team Abu Dhabi, was introduced for the last over. He gave away no runs off the first but a single off the second to Miller. The third from him was slashed by Moeen to third man to move on to 70. He also took a double off the fourth ball and fifth balls.

Moeen hit the last ball for a well-placed boundary to sweeper cover and return to a huge applause for his unbeaten 78. Moeen and Miller put on an unbeaten 73 runs off 30 balls for the third wicket and posted a challenging 119 for 2 in 10 overs.

Hard-hitting Andre Russell opened the Deccan Gladiators innings along with Tom Kohler-Cadmore. Samp Army opening bowler Sheldon Cottrell bowled fine first over giving away just four runs. Russell hit Maheesh Theekshana’s second delivery off the second ball high over mid-wicket for a six. Still only ten runs came off the over and Deccan Gladiators could get only 14 runs from the first two overs.

Off the third over, Russell hit Karim Janat’s first delivery for a four and the third for a six. He also picked a boundary off the fifth ball and pick 14 runs off that over. Runs became hard to come when Dwaine Pretorius was introduced. Kohler-Cadmore still hit a six off Pretorius’ last delivery to long-off. Russell hit Chamika Karunaratne’s fifth delivery for a six to mid-wicket with enormous power.

At the half way mark, Deccan Gladiators were 51 for no loss needing another 69 runs from the remaining five overs.

Samp Army got their breakthrough in the sixth over when Pretorius had Kohler Cadmore out for 14, caught by Moeen Ali for 14. The pair had added 61 runs in six overs. With 59 runs needed off the last 24 balls, Nicholas Pooran walked in. He hit Theekshana for two consecutive boundaries in the seventh over. Forty-four runs needed off the last 18 balls, Russell reached his half century in 27 balls scoring a boundary off Cottrell’s first ball of the eighth over. He also hit the second ball for a boundary. Both boundaries were through hard hits to deep point fence.

Pooran too hit his first six pulling Cottrell and top edging over the keeper’s head. These big hits made it a gettable 23 from 12 balls. Cottrell had given away 23 runs in that over.

The first and second ball of the ninth over too was hit by Russell for boundaries. Russell fell to the third ball caught by Pretorius at extra cover for 63. Fifteen runs were needed off the last nine balls at this stage.

With Odean Smith and Pooran the crease, Deccan Gladiators needed 13 runs off the last six balls. Chamika Karunaratne was introduced for the last over. Pooran got no runs off the first ball but a boundary off the second. The third was smashed for a six to deep midwicket. Pooran also hit the fourth delivery for a boundary to win the match with two balls to spare and remain unbeaten on 38 off 12 balls with five boundaries and two sixes.

Player of the Match: Andre Russell