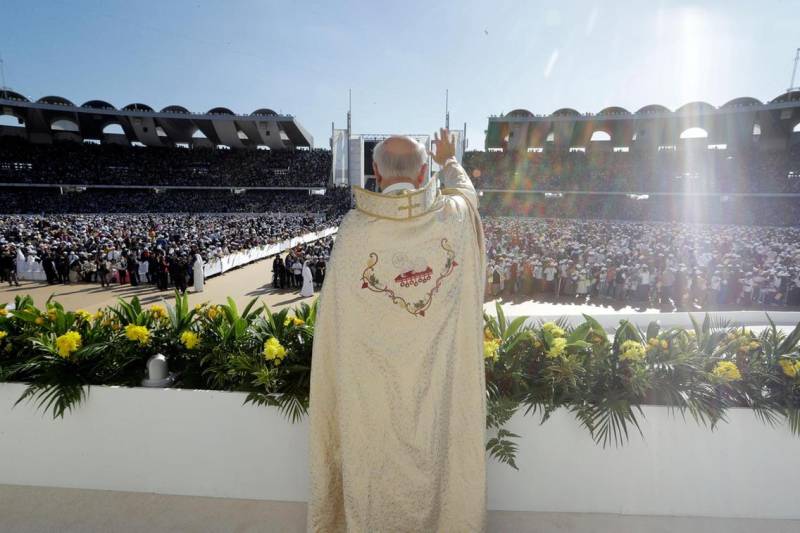 ABU DHABI – Pope Francis held a Mass in the United Arab Emirates (UAE) on Tuesday, the first-ever papal Mass in the Gulf region.

More than 130,000 people attended a Mass celebrated by Pope Francis, but thousands of people were not able to get inside the stadium. Hundreds of people stood outside, listening to the service and choral music from inside the Abu Dhabi’s Zayed Sports City Stadium, according to the official WAM news agency.

On Sunday, the Pope arrived in Abu Dhabi on a three-day visit, the first of its kind by the head of the Catholic Church in the Gulf.

Mohamed bin Zayed bids farewell to His Holiness Pope Francis after a three-day official visit, praising his role in establishing the foundations of peace, fraternity and humanitarian dialogue. pic.twitter.com/RwVPTdN7r2

On Monday, the Catholic Pope signed a document aimed at promoting fraternity with Ahmed el-Tayeb, the Grand Imam of Egypt-based Al-Azhar, the highest seat of learning in the Sunni Muslim world.

We bid farewell to our dear guests, Pope Francis & the Grand Imam Dr Ahmad Al-Tayyeb. Their visit was a landmark in the development of human relations & dialogue between different cultures. We are all partners in promoting tolerance, love & harmony among the people of the world. pic.twitter.com/z7xChowAOg

The Pope’s visit reportedly comes at an invitation from Abu Dhabi Crown Prince Mohammed bin Zayed and the Catholic Church in the UAE.

The Catholic Church estimates as many as 1 million of the over 9 million living in the UAE are Catholic, nearly all of them foreigners drawn to the oil-rich federation to work in everything from white-collar finance to construction. Most are Filipino and Indian, many of whom have left behind families back home in order to come here and work.

Francis’ visit, 800 years after his peace-loving namesake St. Francis of Assisi visited an Egyptian sultan, marked the culmination of years of Holy See efforts to improve relations with the Muslim world after they hit a low during the papacy of Pope Benedict XVI. Since then, religious fanaticism and faith-inspired wars have only grown around the globe, inspiring the pontiff’s efforts to promote tolerance and understanding.