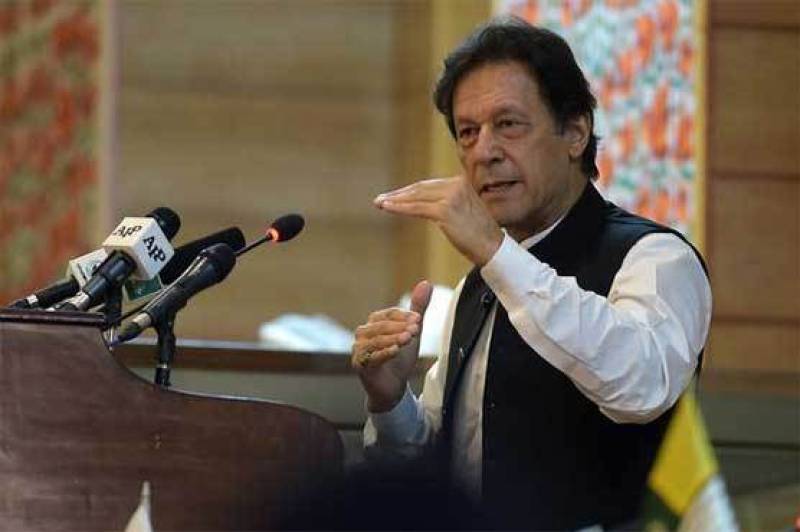 MUZAFFARABAD - Prime Minister Imran Khan Wednesday said Indian premier Narendra Modi had committed a ‘fatal blunder’ with his illegal and unilateral steps over the internationally recognized Kashmir dispute, which would ultimately pave the way for freedom of Indian Occupied Jammu and Kashmir (IOJ&K).

Addressing the Azad Jammu and Kashmir Legislative Assembly to mark the Kashmir Solidarity Day, the prime minister said if Modi could not step back his policies of racism and nationalism in the form of Hindutva would wreck havoc upon India.

“The jinni of racism and nationalism when came out of bottle it always wrecked destruction and spilled bloodshed,” he said, and referred to the genocide in Rwanda, of Jews in Germany and the Muslims in Myanmar. In Karachi, he lamented, ethnic differences were created in the past, leading to killing of hundreds of people.

The prime minister said the Rashtriya Swayamsevak Sangh (RSS), an extremist organization in India, had a philosophy directly inspired from Hitler’s Nazi as its founding father R S Golwalkar had great admiration for that philosophy.

The organization, he said, had documented planning over ethnic cleansing of the Muslims in India. Even other minorities were not spared as evident from enactment of two most controversial citizenship pieces of legislation, he added.

The prime minister said the world was now acknowledging the destruction towards India was heading.

He said Modi’s steps had provided an opportunity to them to highlight the IOJ&K more fervently at the global fora. The world community, which was not realizing the scale of worst inhuman atrocities being perpetrated against the innocent Kashmiris, had now started criticizing India and expressing concerns over the human rights violations and lockdown of 8 million Kashmiris, he added.

AJK president and prime minister were also present during the proceedings.

Imran Khan said the Bharatiya Janata Party’s election campaigns were based upon Pakistan bashing in which sentiments for Hindutva were whipped.

But the world had understood the perilous situation as the Indian intellectuals were also raising their voices as they had also grasped the situation in India.

The prime minister maintained that nations had to face ups and downs as the situations tested their resolve and sharpen their ability to tackle the challenges. Those nations rose to prominence which had overcome the difficult times.

He said for the first time, he had highlighted the RSS philosophy in a speech at the National Assembly.

Reaffirming his position as an ambassador for Kashmir, he said he had made every effort to highlight the issue at all fora, including the UN General Assembly, Geneva conference and during his interaction with US President Donald Trump and other heads of state.

The prime minister said it was their responsibility to keep on apprising and reminding the world with more vigour of the grim situation in the IOJ&K, which had been turned into an open prison.

About his interaction with German Chancellor Angela Merkel, the prime minister said during her preceding visit to New Delhi, she expressed her concerns over the IOJ&K situation. He also told Canada’s Justin Trudeau to keep himself abreast about the situation in the occupied valley.

The prime minister said the European countries now started realizing the alarming situation in India when they had contemplated it with the horrifying outcome of Nazi’s philosophy there.

Almost all the leading channels, newspapers and magazines in the West, he said, were expressing concerns over the grave threat which India had not only posed to the Kashmiris but to herself with such extremist policies. Under a systematic mechanism, minorities in India were targeted, he said, adding the citizenship laws would directly affect 500 million people in India, including about 200 million Muslims.

The prime minister trashed Modi’s statement over war with Pakistan, saying that it was the result of his desperation from the internal turmoil.

How a leader of a country could spell out such an irresponsible statement knowing well that both the countries were nuclear powers, he said, adding, “A normal person cannot utter such a statement. Modi did it only to please followers of RSS philosophy.He is in panic.”

The prime minister also cautioned that for diversion tactics from the internal havoc, the Indian government could stage a false flag operation like the one in the aftermath of Pulwama.

He further termed the Kashmir issue a diplomatic and political fight.

The prime minister also maintained that the word ‘Islamic terrorism’ was used as propaganda and regretted that the Muslim leaders had never fully explained it.

There was no relation between the religion and terrorism, he said and reminded the AJK legislators to be careful about India’s game plan.

He also announced formation of a committee in consultation with the AJK government to further highlight the issue.

Expressing gratitude to the government and the Pakistani nation for their full support, he assured that they would not let the national flag of Pakistan down.

Other legislators also addressed the assembly session highlighting the historic struggle for the right to self-determination as promised by the UN Security Council.