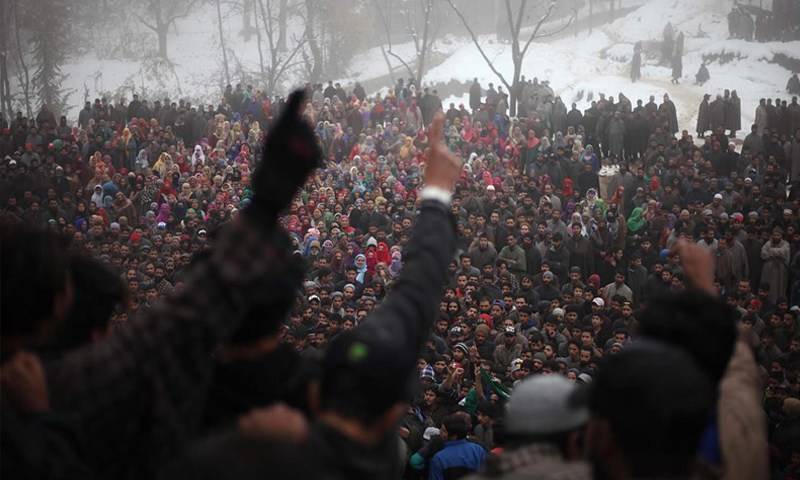 MIRPUR (AJK) – People of Jammu & Kashmir living on both sides of the line of control and rest of the world observed the right of self-determination day on Saturday with the renewal of the pledge to continue their ongoing indigenous struggle with full vigor.

In Azad Jammu Kashmir the public rallies, besides special gatherings and processions in all ten district headquarters of the liberated territory were the hallmark of the day.

The special meetings highlighted the importance of early grant of the right of self-determination to Jammu Kashmir people – which was being suppressed and denied by India since over last 70 years at the might of her occupational military forces.

Today, marks the 70th year since the UNSC’s resolution granting the right to self determination to Kashmiris was adopted - the continuing bloodbath in #IOK and unresolved #Jammu&Kashmir dispute is a collective failure of the world. #Kashmirbleeds (1/2)

#Pakistan will continue to extend political, diplomatic & moral support to the Kashmiris in the legitimate struggle to self determination. We also reiterate our call for urgent establishment of the #OHCHR COI to look into the indian atrocities in IOK #Kashmirbleeds (2/2)

Special rallies held at various parts of AJK including in this district, warned that the people of Pakistan and Azad Jammu & Kashmir will respond to every aggressive posture of India against Pakistan or AJK with the same coin shoulder to shoulder the valiant armed forces of Pakistan for the defense of inch after inch of the motherland.

“The people of Jammu and Kashmir will not hesitate from giving any sacrifice for the defense of the security, stability, sovereignty and the ideological and geographical frontiers of Pakistan including AJK in case of any aggression from across the frontiers including the line of control in Jammu and Kashmir,” they warned.

January 05; Islamabad: Sending an email to UN Secretary General during the "Kashmir Email Conference" on the eve of Kashmir Self-Determination Day petitioning the implementation of the right to self-determination of the Kashmiri people in accordance with the UNSC resolution. pic.twitter.com/Iygf7fbNPq

The rallies were taken out to observe the right to self-determination day, which the people of Jammu & Kashmir inhibiting both sides of the line of control and remaining parts of the world observed with the renewal of the pledge to continue the struggle with full vigor till the achievement of their legitimate right of self-determination committed and enshrined through the historic U.N resolutions on Kashmir passed this day in 1949 by the world community.

The right of self-determination day reiterates the long cherished demand of the Kashmiris that they should be granted their birth right to decide about their destiny under the spirit of the internationally-acknowledged UN resolutions.

Kashmiris observe this day every year to invite the attention of the world especially to remind United Nations Organization to immediately move for implementation of January 5, 1949 UN resolutions on Kashmir to ensure the early grant of Internationally-acknowledged right to self-determination to the people of Jammu & Kashmir enabling them to decide about their destine through a free and fair plebiscite in the internationally-acknowledged disputed Himalayan state of Jammu and Kashmir without further loss of time.

New Delhi is denying the Jammu & Kashmir people of their legitimate right of self-determination at the might of her over eight lakh occupying troops in occupied Jammu & Kashmir since over last 69 years.

In Azad Jammu Kashmir the public rallies, besides special meetings and seminars at all district headquarters besides the State's metropolis - Muzaffarabad, Mirpur, Rawalakot and other places were the hallmark of the day. In these special mass public rallies, speakers highlighted the importance of the early grant of the right of self-determination to Jammu & Kashmir people – which was being suppressed and denied by India since over last seven decades.

SRINAGAR – After failing to suppress the Kashmiris’ ongoing freedom movement with bullets, pellets and teargas and ...

Through various unanimously-passed resolutions, the rally reiterated Kashmiris just and principled stance before the world that they (Jammu Kashmir people) would continue their struggle for the right of self-determination till the achievement of the ultimate goal.

They particularly highlighted the reality with the earnest demand about early grant of the birthright of self-determination to Kashmiris without further loss of time and which was being denied by India since last 70 years because of her traditional hostile and stubborn attitude.

They called upon the UNO and other international community to take immediate notice of the increased aggressive designs of India in the region – which they warned, may turn into a conventional war in the region.