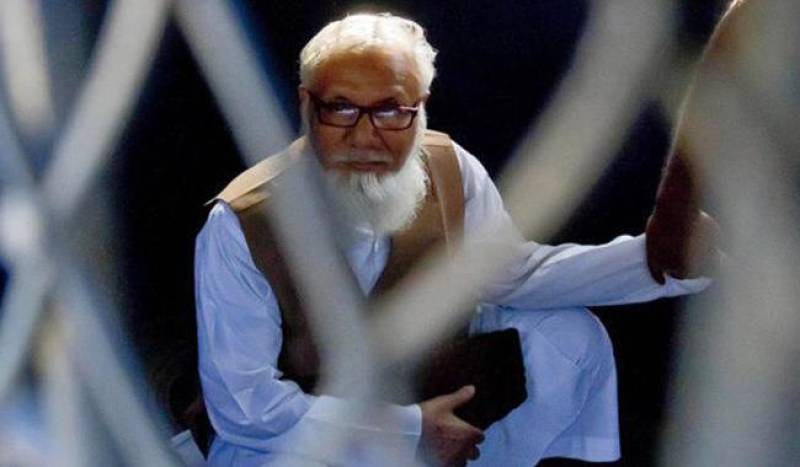 DHAKA (News Desk) - Jamaat-e-Islami Bangladesh chief Motiur Rahman Nizami is set to be hanged at any moment as the Bangladeshi Supreme Court has rejected his final plea against the death penalty awarded by the country's "controversial" war crimes tribunal.

Nizami -who also served as minister under former Prime Minister Khaleda Zia- has been accused of genocide, rape and the murder of Bengali intellectuals during the 1971 war, which resulted in establishment of Bangladesh as an independent state. He was the supreme commander of the militia group al-Badr, which was then supported armed forces of Pakistan.

He is last prominent leader of Jamaat-e-Islamic's Bangladesh chapter to be put on trial for the 1971 war crimes. The war crimes tribunal sentenced him to death on October 29, 2014, however his hanging was delayed after he moved Supreme Court of Bangladesh against the verdict.

The Supreme Court upheld the tribunal's decision in January this year. Seeking a reversal, the legal counsels of Motiur Rahman Nizami subsequently filed a review petition with the apex court.

As many as four opposition politicians, including three top Jamaat-e-Islami leaders, have so far been convicted by the war crimes tribunal and executed since 2013, while many others still remain under trial.

The tribunal has also attracted worldwide criticism as human rights activists believe that such trials could lead to radicalisation of Bangladeshi society. However, the current Bangladeshi government led by Prime Minister Sheikh Hasina Wajid has routinely dismissed such arguments.

A non-profit organization based in Italy "No Peace Without Justice" has called the tribunal's decisions a politically motivated revenge campaign and a weapon against the opposition parties.

He says, "Bangladesh, as a state, had gave up its right to try war crimes in 1971 under the 1972 Tripartite Agreement; however it reneged on the agreement in 2009 to establish the war crimes tribunal."

The targeting of one political party by the war crimes tribunal is also manifestly apparent from the tribunals proceedings, which are in violation of articles 9, 6 and 14 of the International Covenant on Civil and Political Rights (ICCPR), he adds.

Pakistani Foreign Office also expressed dissatisfaction over the proceedings of the war crimes tribunal, demanding that the Bangladeshi government must act on the international community's concerns pertaining to the controversial tribunal's proceedings.

In February this year, a spokesman for the Foreign Office said that Pakistan is deeply disturbed by the executions of opposition leaders in Bangladesh for their role in the 1971 war, including Bangladesh Nationalist Party leader Salahuddin Quader Chowdhury and Jamaat-e-Islami secretary general Ali Ahsan Mohammad Mujahid.

However, renowned lawyer and human rights activist Asma Jehangir believes that Pakistan's reaction to the executions in Bangladesh is out of place.

Why is the hanging of two Bangladeshis more important for the Pakistani government than the flawed executions of its own citizens? she asked, in a statement.

She, simultaneously, also maintains that punishment for the 1971 war crimes will further divide the Bangladeshi society and lead to civil violence.

In the last month alone, at least five people, including a university teacher, two LGBT activists and a Hindu were hacked to death by mobs in Bangladesh.

Prime Minister Hasina Wajid's government blames Jamaat-e-Islami and other opposition parties for the violence, while the political parties consider the government responsible of the surging violence, rebutting the allegations.