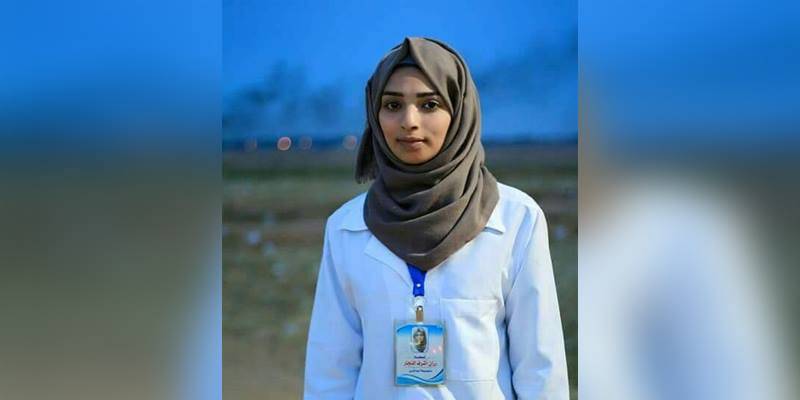 JERUSALEM - In an act of utter cowardice and cruelty, an Israeli sniper shot in the chest and killed a Palestinian nurse, Razan Al-Najjar, on Friday setting a fresh example of brutality and barbarism.

The 21 year old Najjar was gunned down near Khan Yunis while she was in the process of delivering medical assistance to wounded protesters in the southern Gaza Strip.

Her death has brought the total death toll to 119 since the protests were launched on March 30.

What exacerbates the situation is the fact that it is a settled principle of international law that medical staff shall not be harmed in the event of armed conflict or civil unrest.

The fundamental principle regarding medical personnel is set in the Geneva Conventions, 1949, and guarantees a specially protected status to medical staff, meaning that they must be respected and protected at all times and in all circumstances - even during war.

Imperatively, it has been reported that Al-Najar was wearing her white nurse coat when she was targeted, ruling out the possibility of the incident, being an accident.

The Israeli forces have unleashed a fresh spasm of violence in the restive region and on a daily basis it is reported and broadcast that the Palestinians are subjected to violence.

However, Al-Najar’s assassination seems to indicate towards a new episode in the Gaza strip conflict where the international norms are being flouted, out of aggression and power struggle.