Why were 11 princes and ex-ministers arrested in Saudi crackdown? 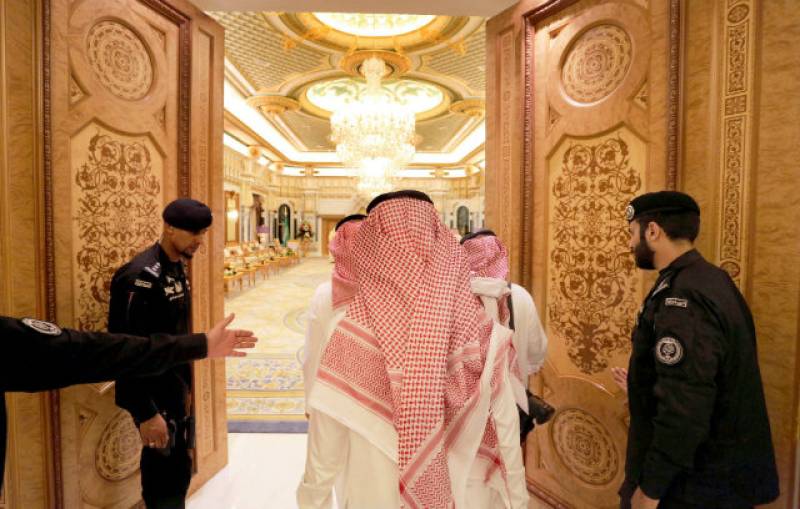 The sweeping campaign of arrests appears to be the latest move to consolidate the power of Crown Prince Mohammed bin Salman, the favorite son and top adviser of King Salman.

King Salman had decreed the creation of a powerful new anti-corruption committee, headed by the crown prince, only hours before the committee ordered the arrests on Saturday night.

Although there is no official word yet, there are reports that the arrested royals have been detained for money laundering, bribery, funds embezzlement and fraud, among other charges.

Accused of making fake weapon purchases and landing contracts to his private companies.

Accused of using his influence to land Riyadh city train contracts to his personal companies.

Involved in fake weapons deals and "the black dove scandal"

Accusations of being involved with previous four and working as a mediator for the fake contracts.

Accusations of using his influence to bribe and mediate government contracts to certain people in the name of the King.

His involvement in Jeddah corruption case that lead to the death of 100 people in 2009 Jeddah floods.

Accusations of creating fake contracts and embezzling the budgets for all the economical city projects during King Abdullah era.

Involvement in the Jeddah corruption case and the 2009 Jeddah floods.

Using his influence to embezzle money from the government in the King's name.

Involved in the embezzlement case of $1.8 billion by double billing the entire country.

Involved in contract fraud and embezzlement.

The arrests came as Lebanon’s prime minister, a close Saudi ally, announced his own resignation from the Saudi capital. Yemeni rebels, the target of a 2 ½ year Saudi-led military campaign, meanwhile fired a ballistic missile toward Riyadh’s international airport on Saturday night that was intercepted by Saudi air defense before it could cause any damage.

Al-Arabiya reported that the anti-graft committee is looking into deadly floods that overwhelmed parts of the city of Jiddah in 2009 and the government’s response to the Middle East Respiratory Syndrome (MERS) virus that has killed several hundred people in the past few years.

Reports also suggested those detained were being held in the Ritz Carlton in Riyadh, which only days earlier hosted a major investment conference. The phone number for the hotel had been disconnected by Sunday morning and a Dubai-based spokeswoman for the hotel chain did not respond to a request for comment.

The government said the anti-corruption committee has the right to issue arrest warrants, impose travel restrictions and freeze bank accounts. It can also trace funds, prevent the transfer of funds or the liquidation of assets, and take other precautionary measures until cases are referred to the judiciary.

The royal order said the committee was established “due to the propensity of some people for abuse, putting their personal interest above public interest, and stealing public funds.”

Saudi nationals have long complained of rampant corruption in government and of public funds being squandered or misused by people in power.