"Keep the doors of Tihar Jail open, we are coming," Kashmiri leaders to court arrest 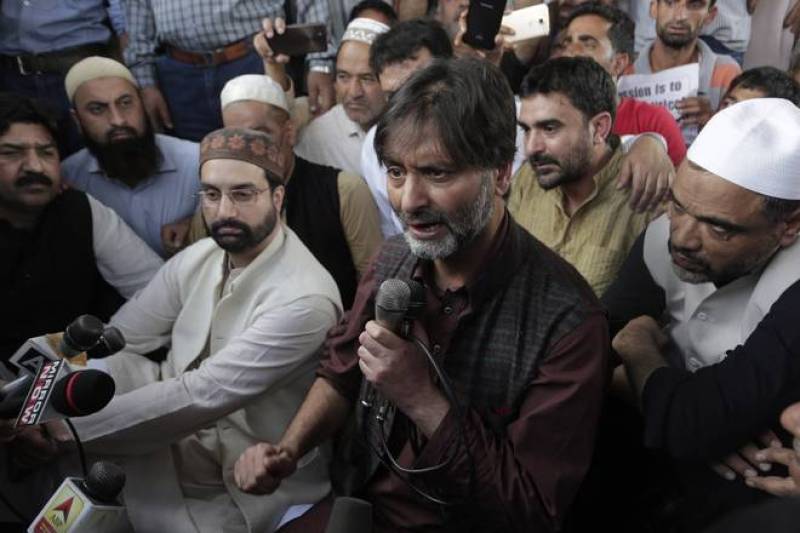 SRINAGAR - Senior Kashmiri leaders Syed Ali Geelani, Mirwaiz Umer Farooq and Muhammad Yasin Malik on Wednesday said the NIA raids would not deter them and they would court arrest at the headquarters of the anti-terror agency on September 9.

Addressing the Joint Resistance Leadership (JRL), the leaders said they have booked tickets for Delhi for a court arrest. The statements came as the premier investigating agency that is presently probing the terror funding case in Jammu and Kashmir carried out fresh raids at 11 places in the Valley.

“We are your targets. Keep the doors of Tihar Jail open, we are coming,” Pro-Azadi Jammu and Kashmir Liberation Front (JKLF) chief Malik said.

The leaders announced that they will hold a protest march to the Delhi headquarters of the National Investigation Agency (NIA) on September 9 and court arrest to protest against the harassment of the Kashmiri leaders by the investigation agency.

While Farooq and Malik were present at the press conference, Geelani addressed the media on phone since he is under house arrest in the city’s uptown Hyderpora area.

Geelani said the NIA had been “unleashed on the leaders of the local freedom movement” to break the people’s resolve, adding that such tactics would not deter the Kashmiris from seeking their basic right to self-determination.

Jammu and Kashmir Liberation Front chief Malik said: “After repeated crackdowns and beating of locals, including young girls and elderly people, the government has brought in the NIA to discredit the people’s movement in Kashmir.”

Questioning the credibility of official agencies, Malik alleged that those detained under the Public Safety Act but ordered to be released by the High Court were booked on some other charge under the said law.

He also claimed that people in Kashmir were spending lakhs of rupees on the education of their children who were accused by the government of getting paid Rs 300 to throw stones at security forces and thus risk their lives.

“In the name of crackdowns, young girls and old people are beaten up in south Kashmir areas in order to deter people from their struggle,” the JKLF leader said.

“NIA teams searched 11 locations in Srinagar and five in Delhi. They are related to the Jammu and Kashmir terror funding case. The searches are still going on,” an NIA official in Delhi told IANS.

In Srinagar, the raids were being carried out at the offices and residences of Bashir Ahmad Kaloo, Showkat Ahmad Kaloo, Abdul Rashid Bhat, Firdous Iqbal Wani, Sajad Syed Khan and Imran Causa.

In Delhi, the searches were being conducted in the Shadipur depot and Khari Baoli area at the residences and office premises of Ganga Bishan Gupta, Firoz Akhtar Siddiqui and Sunil Kumar Jain, the officer said.