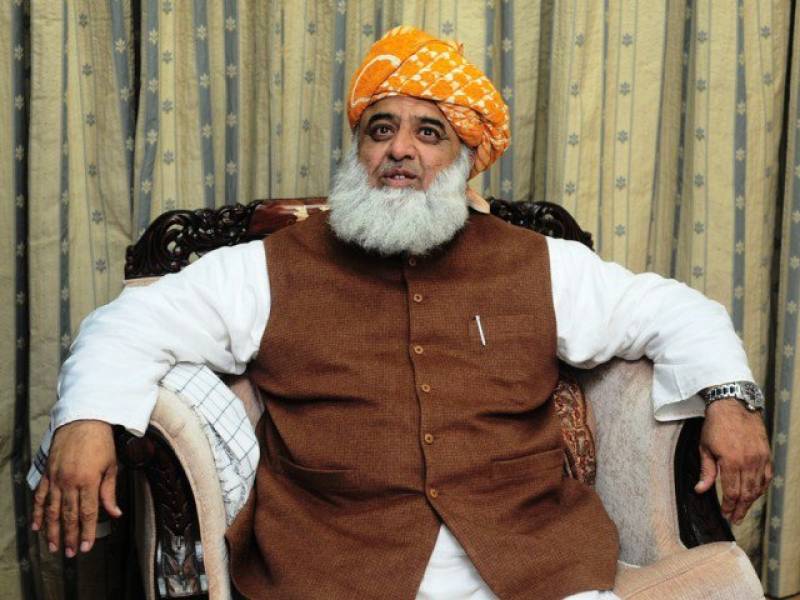 ISLAMABAD - Jamiat Ulema-e-Islam Fazl (JUI-F) chief Fazlur Rehman announced on Saturday that the anti-govt march, scheduled to begin on October 27th, would only end when the government falls.

Likening his upcoming 'Azadi March' to war, the JUI-F leader said the entire country will be a war zone and a flood of people from all over the country was coming to join the march, adding that the 'fake rulers' will drown in it like a straw.

At a press conference in Peshawar, the politician said his strategy would keep on changing to cope with any situation.

When asked whether he enjoys the support of other opposition parties, Fazl said he hopes to see them, adding that since all opposition parties agreed that 2018 general elections were 'fake' and that reelection should be conducted, they should all be on the same page and same stage.

The JUI-F chief clarified that he was not afraid of arrest, as such a move would 'fan the protesters' anger' against the government.

To a query about using children studying in seminaries against the government, Rehman alleged that the rulers were trying to deny the students their democratic right.

He, however, claimed that the proportion of seminary students would be minimal as people from 'every walk of life' were joining the march.

"By taking up the seminaries issue, you (government) want to attract international support," Rehman said while referring to the statement of Premier Imran Khan made a day ago.

He added that the prizes distributed among students of seminaries by the premier was an attempt to 'counter us' but said it was useless.

Fazl also urged the establishment, bureaucracy and police not to back this 'illegitimate government' and distance themselves from it.

"We do not want to clash with institutions," he asserted.

The JUI-F chief rejected the perception of similarity between the sit-ins held by Pakistan Tehreek-i-Insaf, Pakistan Awami Tehreek's Tahirul Qadri and Tehreek-i-Labbaik Pakistan's Khadim Rizvi and his march, saying he was leading a march for the independence of the public.

The former lawmaker said it was the party's right to collect donations for its march.

"We are not being funded by any western country. We are asking our workers, friends," he said.

The JUI-F leader has announced to kickstart a long march against the government that will terminate in the capital, where the party plans to hold a sit-in at the D-chowk.

Both PPP and PML-N have not yet committed to participating in the march; PML-N had asked Maulana to delay the march while PPP said it would discuss the matter.