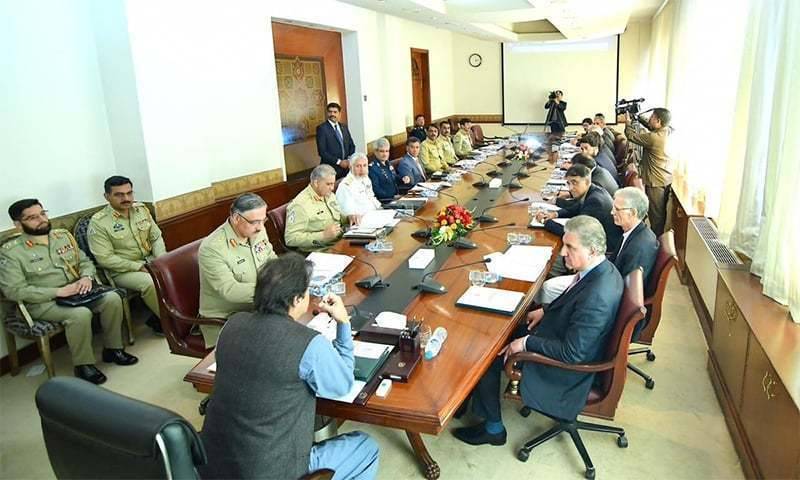 ISLAMABAD – Prime Minister Imran Khan has summoned a second session of the National Security Committee within a week following the illegal Indian move to scrap special status of occupied Jammu and Kashmir.

In the Wednesday’s session, the top civil-military brass will review the response strategy after the Indian government revoked Article 370 and Article 35-A which gives a special autonomy to the disputed Himalayan region.

Earlier today, the Pakistani premier maintained the independence movement in Jammu and Kashmir could not be crushed with India's single presidential decree and urged the international community to act soon, lest the dispute between neighbouring Pakistan and India sparked any nuclear war.

"It's not nuclear blackmailing, rather I am appealing to the common sense. Is the world prepared for the worst?" the prime minister said in his address to a specially summoned joint sitting of the parliament, as India revoked special status of Jammu and Kashmir on Monday.

The prime minister said India's unconstitutional move to suppress the voice of Kashmiris would lead to more reaction, adding that he could predict several Pulwama-like incidents in future.

He further said deliberate attempt to change demographics of population was a sheer violation of Geneva Convention and also subjected to war crimes.

The PM informed the joint House that said Pakistan was considering to approach all international fora including the United Nations Security Council and the International Criminal Court to fight India's illegal act of revocation of Article 370 of its constitution.

He recalled that his government after assuming office in last August focused on reinvigorating ties with all neighbouring countries including India to encourage dialogue for resolution of all outstanding issues on bilateral basis.

However, he regretted, the government of Bharatia Janta Party (BJP) did not respond positively and used anti-Pakistan sentiments to get votes in elections for its second tenure.

He highlighted that the change in historic status of Jammu and Kashmir was in line with the BJP's ideology based on racism and ethnic cleansing of Muslims.

"This is the same ideology that hit the secular ideology of Mahatma Gandhi and Jawahar Lal Nehru," he said.

In the previous NSC session over the weekend, PM Imran had said that Pakistan will effectively respond to any type of aggression or provocation from India with its people's support.

A briefing on the situation in IoK was given during the Sunday’s session, which was attended by the chairperson of the Joint Chiefs of Staff Committee (JCSC), the heads of all three armed forces, intelligence officials, federal ministers of defence, foreign affairs, and interior, and the directors-general of the Inter-Services Public Relations (ISPR) and the Inter-Services Intelligence (ISI).

ISLAMABAD – Prime Minister Imran Khan has said Pakistan will always stand with Kashmiris and will not be deterred ...

PM Imran had convened a meeting of the NSC to discuss issues pertaining to the national security in the wake of cluster bomb attack carried out by India against civilians in Neelum Valley.