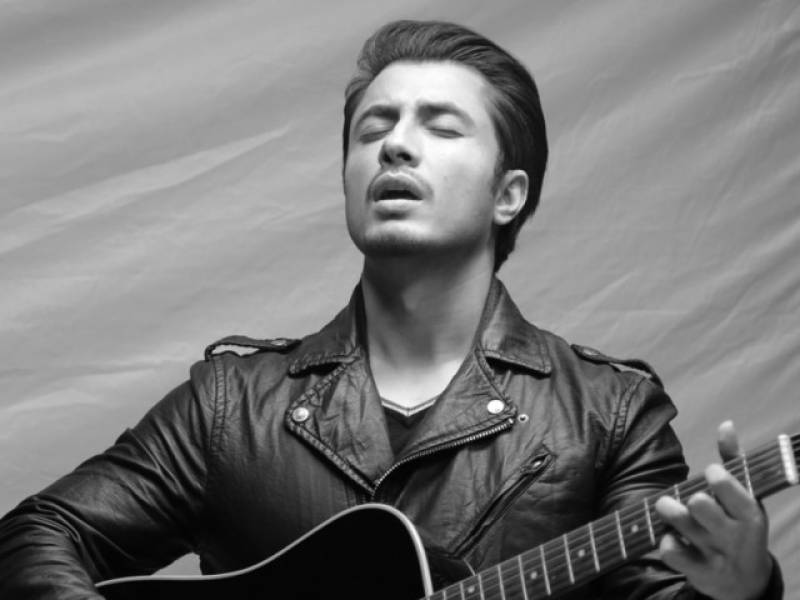 KARACHI (Web Desk) - Singer-actor Ali Zafar has written an emotional letter to Pakistani nation urging them to contribute more to the fund established for betterment of educational institutes in Pakistan.

The pop singer is all set to release his new song "Urein Ge" on February 7, to pay tribute to the victims of Army Public School Peshawar attack that killed 140 children.

A day before the release, Zafar has penned an emotional letter, highlighting the importance of giving back to society:

For years, you have seen me sing, dance, act and perform to entertain you. My gratitude for your love, appreciation and admiration, can never be expressed through words.

I have always believed that an artist should be more than a tool for his art to resonate through. He must also resonate the voice of his surroundings by being socially aware and strive to contribute to his environment for the better in whatever little or large manner that he decides for himself.

Although I have been keenly contributing towards various social causes, I always chose not to personally highlight them, until last year.

The reason behind this shift was conscious. I thought it was time to not just do more, but also to motivate and inspire others to do more. I believed that we had no other choice left.

Through decades we have witnessed our society degenerate because of various socio-political reasons. If we don’t make and take a stand now, and continue to rely on others to do it for us, we will never attain, retain or sustain the status of a homeland we aspire for.

A progressive, peaceful, tolerant and positive Pakistan where the highest value would not just be to safeguard a human life but also of an animal’s. Where the three pillars defined by our Quaid – Unity, faith and discipline won’t be mere concepts in our textbook but would become our second nature. Where, as guided by the Holy Prophet (pbuh) people would be judged for their superiority on others through their piety, honesty, and sincerity and not their assets. Gone are the times, to remain in denial.

We must own and recognise our mistakes in order to rectify them and act fast to redefine ourselves and our true calling.

We are a resilient nation who has made it through the toughest of times and battles as we shall now. Let’s rise and play our part in creating a better future for all of us and our future generations.

What we went through on the day of 16/12 cannot be described in words. If not for ourselves, let us rise together for those children who gave their lives for our awakening. Let’s stand united for them and for our own children. Let’s look into their eyes and decide what we intend to leave behind for them.

I have travelled the world, seen it all. There is no better joy than giving. No better feeling than the feeling you get when you look beyond your personal and professional gains and aspirations and take a step towards something bigger and higher than yourself. So let’s start giving. And let’s do it together!

Personally, I have collaborated with a leading Pakistani educational non-profit organisation, The Citizens Foundation (TCF) and 141schools.org (141 SCHOOLS), a new citizen web movement. Together, they are building 141 schools across Pakistan. Each school will be dedicated to the children and teachers who lost their lives in attack on the 16th of December 2014. All proceeds from the downloads of the song will go to into building schools for the children of Pakistan and ensuring a bright future.

You can also play your part by responsibly downloading the song only through mentioned links of Taazi.com and iTunes who have also collaborated to send all profits for the cause. Please DO NOT download free pirated mp3s available online. You can also donate to building a school by clicking www. 141schools.org/alizafar.

And to sign off, I am deeply indebted to all the artists, who came and participated in the video. After I recorded the song, I thought about how I could take it beyond just a personal expression. I started calling my friends, acquaintances and colleagues from the industry, old veterans and upcoming stars, shared my thought of coming together for a cause greater then all of us and the response I met with further strengthened my belief…… that…Pakistan will rise!!!

Urainge us aasman mein; (We’ll fly in such a sky)

Jahaan dard ka koi maara na ho; (where no one quivers in pain)

koi maa say bichara dulaara no ho; (no mother would live without her child)

siva ishq kay koi chaara na ho; (nothing to choose from than love)