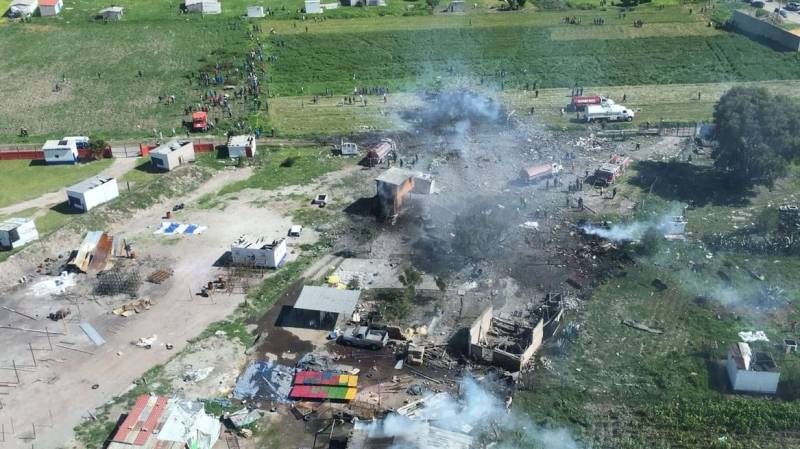 TULTEPEC - At least 24 people were killed in a series of explosions Thursday at fireworks warehouses in the town of Tultepec in central Mexico, including rescue workers who died saving others' lives, officials said.

The initial explosion occurred around 9:30 am (1430 GMT), then spread to other warehouses just as police and firefighters began attending to the first victims in the town, which is known for its artisanal fireworks -- and a history of deadly accidents.

"We deeply regret the deaths of those who were killed this morning in... Tultepec, including our firefighter and police colleagues who lost their lives saving those of many others," read a tweet from the Red Cross in the state of Mexico, where Tultepec is located.

At least 19 people were killed -- including a minor -- and 40 wounded, said state Interior Minister Alejandro Ozuna.

Hundreds of soldiers, police and firefighters deployed to the neighborhood of Xahuento, on the outskirts of the town, cordoning off a wide area around the smoldering workshops where the explosions ocurred.

An anguished teenager was asking rescue workers for information about his father, a fireworks maker who worked in the area.

"The last time I saw him was this morning. I left school to look for him as soon as we heard about the explosion. But they won't let me through and nobody is giving me any information," said Allan Osvaldo, 14.

An overpowering smell of gunpowder hung in the air, and charred furniture and bricks hurled through the air by the explosions could be seen lying in the grass, even outside the ample security perimeter.

"I was having breakfast when there was a terrible blast. We left the house running and I saw a huge white cloud in the sky, as if it were going to rain -- except today it rained fire," said Alondra Perez, 62, who lives across the road.

Rescue workers confirmed that some of their own had been caught in the explosions, though it was not immediately clear how many.

A police officer told AFP an ambulance had been completely charred in one of the blasts.

"People here insist on continuing to make fireworks. It's their tradition. But they don't gauge the consequences of these tragedies. It's infuriating because our firefighter colleagues... end up dead saving these people," he said, speaking on condition of anonymity.

Mexican President Enrique Pena Nieto sent his condolences to the victims' families on Twitter and said the army and interior ministry were supporting the state rescue effort.

Authorities suspended all fireworks sales in the area. The state interior minister said an "exhaustive review" would be carried out of all workshops' permits.

"We know it's a way of life and a tradition, but we have to send the community the message, and they have to understand, that it must be regulated, for their own safety," he said.

Tultepec is known for making the fireworks that Mexicans traditionally use to celebrate holidays and saints' days. It has been hit by devastating explosions in the past.

On June 6, seven people were killed in a similar blast and on December 20, 2016, 42 people were killed and 70 injured in a series of spectacular explosions at Tultepec's San Pablito market, the largest fireworks market in the country.

On that occasion, investigators say a rocket exploded at the market and set off a chain reaction of other blasts.