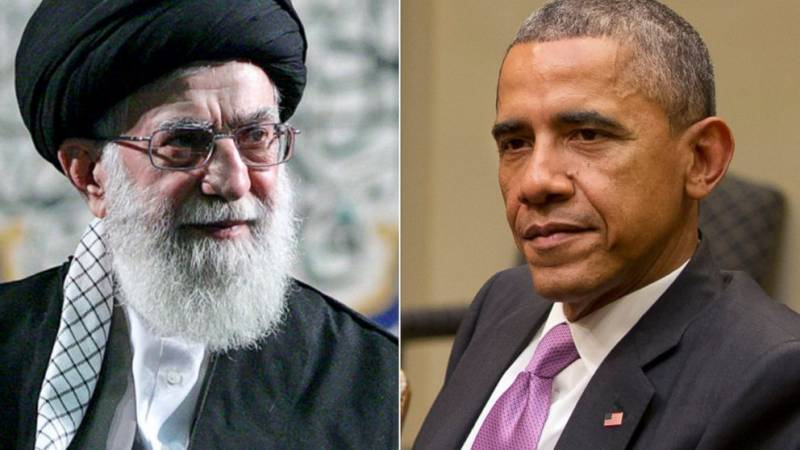 “Holding nuclear talks (with major powers) under shadow of threat is unacceptable for Iran ... Our nation will not accept it ... Military threats will not help the talks,” Press TV quoted Khamenei as saying.

Earlier, a Reuters report had noted, citing US officials, that US President Barack Obama could urge America's allies in the Persian Gulf to build an anti-missile shield to deter potential threats from Iran. However, it was not clear if Khamenei's remarks were in response to this report.

President Barack Obama is expected to make a renewed US push next week to help Gulf allies create a region-wide defense system to guard against Iranian missiles as he seeks to allay their anxieties over any nuclear deal with Tehran, according to US sources.

The offer could be accompanied by enhanced security commitments, new arms sales and more joint military exercises, US officials say, as Obama tries to reassure Gulf Arab countries that Washington is not abandoning them, the Reuters reported.

With little more than a week to go before Obama hosts the six-nation Gulf Cooperation Council at the White House and then at Camp David, aides are discussing the options in pre-summit meetings with Arab diplomats. Officials say no final decisions on possible US proposals have been made.

Obama faces a formidable challenge in deciding how far to go to sell skeptical Sunni-led allies on his top foreign policy priority, a final nuclear deal with Shia Iran due by a June 30 deadline. Failure to placate them could further strain ties, though additional defense obligations would carry the risk of the United States being drawn into new Middle East conflicts.

Obama issued the invitation to the GCC after Iran and six world powers reached a framework agreement last month that would give Tehran sanctions relief for reining in its nuclear program.

Gulf Arab neighbours, including key US ally Saudi Arabia, worry that Iran will not be deterred from a nuclear bomb and will be flush with cash from unfrozen assets to fund proxies and expand its influence in countries such as Syria, Yemen and Lebanon.

US officials with knowledge of the internal discussions concede that Obama is under pressure to calm Arab fears by offering strengthened commitments.

“It’s a time to see what things might be required to be formalised,” a senior US official said.

Obama is all but certain to stop short of a full security treaty with Saudi Arabia or other Gulf nations as that would require approval by the Republican-controlled Senate and risk stoking tensions with Washington's main Middle East ally Israel.

A second US official insisted the summit would be a “two-way street,” with Washington pushing Gulf leaders to overcome internal rivalries and find ways to collaborate better in their own defence.

Obama is likely to press Gulf allies to do more to integrate their disparate militaries and work toward a long-delayed anti-missile shield against an Iranian ballistic missile threat, the sources familiar with the discussions said. This could take the form of a new high-level joint working group led by the Pentagon, one of the sources said.

But the Obama administration is now expected to press them to implement the initiative touted in late 2013 by then-Secretary of Defense Chuck Hagel.

The program allows the GCC to purchase equipment as a bloc and start knitting together radars, sensors and early warning networks with US assistance, but has been held up by distrust among some of the Gulf monarchies.

The Obama administration is concerned about shortcomings in the Gulf states’ joint operational capacity exposed by a Saudi-led bombing campaign in Yemen that has failed to push back Iran-allied Houthi fighters.

It was unclear specifically what Washington would offer the Gulf nations - which already operate some of the most advanced US-made weaponry - in order to advance the missile shield. Lingering rifts between GCC members, especially Qatar and the United Arab Emirates, would need to be put aside before a joint missile system would be viable.

Experts now believe the time is ripe for greater cooperation because of deteriorating security across the region.

“Missile defense is absolutely critical to the GCC right now,” said Riki Ellison, founder of the nonprofit Missile Defense Advocacy Alliance. “They’re not as efficient playing separately as they would be all playing as one team,” he said.

Wary that Obama might keep any new security pledges vague, Gulf states have also made clear they want this translated into concrete steps.

“This summit can’t just be a big photo-op to pretend everybody’s on the same page on Iran,” one Arab diplomat said.

Several arms sales are likely, including resupplying bombs and missiles depleted in the Saudi-led air assault in Yemen and in strikes against Islamic State militants in the US-led air campaign in Syria, the sources close to the matter said.

But Washington is widely expected to stand firm on its decision for now to withhold sales of Lockheed’s new top-flight F-35 fighter jet, which has been promised to Israel to help maintain a long-standing US commitment to its regional military superiority.