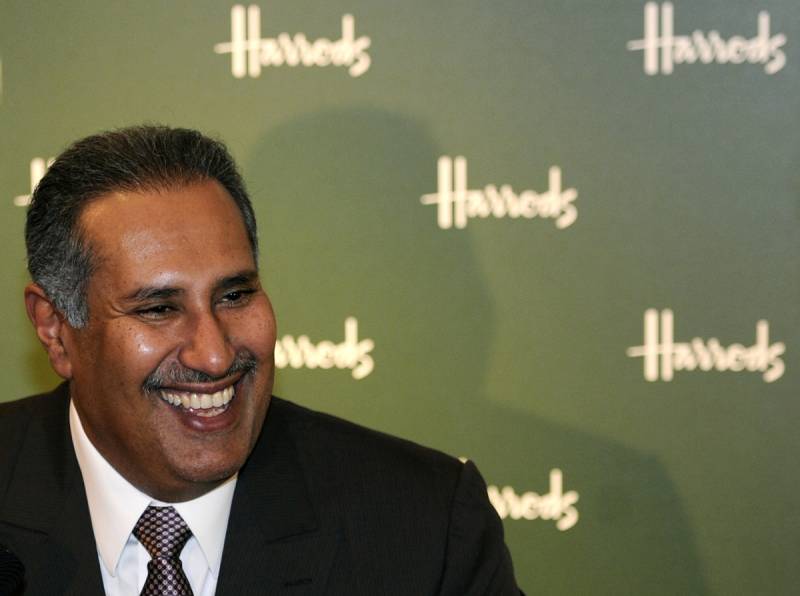 Uncovered by the International Consortium of Investigative Journalists on Sunday, the latest documents blew the lid off  several global notables including Queen Elizabeth II of England and US Secretary of State Rex Tillerson but another renowned politician named in the papers is Prince Hamad bin Jassim bin Jaber Al Thani.

Though Jassim might be of ordinary importance for international community, but for Pakistan, he is not an unknown face as he became the central figure to investigations triggered in the country in the backdrop of Panama Papers revealed last year.

The Qatari prince hit headlines in the country when a letter attributed to him by the then ruling Sharif family was submitted in the Supreme Court.

The letter that appeared as a 'straw' to the embattled Sharif family suggested that Jassim's elders had business terms with the father of the then Pakistani Premier Nawaz Sharif and the business ties eventually led to the purchase of upscale Avenfield House flats in London.

The letter dubbed 'Qatari Letter' was submitted on Nov 15 by the counsel for Nawaz Sharif, Akram Sheikh.

“In the year 2006, the accounts in relation to the above investment were settled between Hussain Nawaz Sharif and Al Thani family, who then delivered the bearer shares of the companies referred in para 4 above to a representative of Hussain Nawaz Sharif,” the letter read.

In January 2017, another letter attributed to the same prince was furnished before the top court explaining that the investment quoted in first letter was 'made by way of provision of cash, which was a common practice in the Gulf region'.

Much to the dismay of Sharif family, the letter was termed a 'myth' by the Joint Investigation team formulated by the Supreme Court in the aftermath of April 23 order.

Apart from rejecting the letter, the members of the inquiry panel ruled that the ruling family had never invested 12 million Dirhams in the Qatari royal family’s business.

Following investigations, the JIT termed the contents of both Qatari letters ‘hearsay’ and contradictory in nature, stating the “prince did not mention how, when and from whom he learnt about this [investment in Qatar].”

In the fresh Paradise papers revelations, Qatari Prince, Hamad bin Jassim bin Jaber Al Thani is named among the Qinvest LLC Board members.
The QLearn, a subsidiary of Qatar’s Qinvest sold 19,52,907 shares of Indian coaching class giant FIITJEE but through offshore Mauritius.
Prior to Paradise Papers, the Qatari Prince was also named in the Panama papers that dethroned the Pakistani Premier Nawaz Sharif.