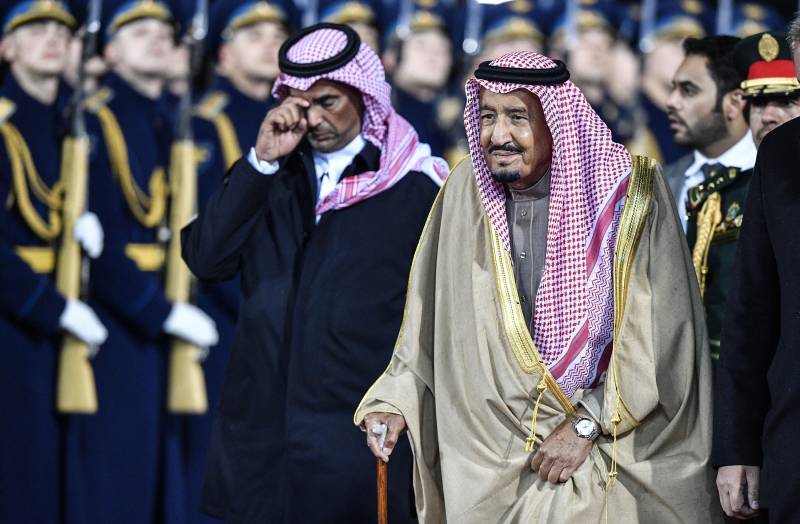 MOSCOW -  King Salman bin Abdulaziz of Saudi Arabia has strong form in bringing a lavish entourage on his four-day state visit, and as part of his latest trip he reportedly flew in 1,500 staff, plush carpets and gold plated protective barriers to Russia.

The 81-year-old leader of the Gulf kingdom exited his plane late on Wednesday and stepped out onto the special escalator he travels with. But something went wrong: It malfunctioned halfway down, and he had to walk the rest of the way. A cavalcade of cars sped the monarch to the centre of the city, flanked by Russian police escorts.

The Saudi Arabia head of state booked out both the Four Seasons Moscow and the Ritz Carlton in preparation for the discussions.

The two luxury hotels are thought to be the base for part of the Saudi leader’s massive 1,500-strong staff, according to some media reports.

A premier room at the Four Seasons can cost upwards of $3,800, with the top Pozharsky Royal suite only available for booking on request.

Coinciding with King Salman bin Abdulaziz’s visit, the Ritz Carlton hotel, located just 1km from the Kremlin, shut down its entire car park until October 8. The facility has a daily charge of around $50 dollars per vehicle.

The Saudi royal’s entourage includes staff familiar with specific food preparations and how the monarch prefers his coffee. Reports suggest plush carpets were also brought in by Saudi officials to make the stay a comfortable one.

The House of Saud is estimated to be worth around $1.4 trillion, meaning King bin Abdulaziz has a vast fortune to dip into when travelling abroad.

The funds extend to a luxury planes, gold-plated protection and a customized escalator. While on a visit to Japan in March, the delegation of Saudi officials arrived on 10 aircraft.

Around 1,200 hotel rooms in Tokyo were reserved for the group during the stay, while some 500 limousines were also reportedly used on the four-day tour.

During the first visit to Russia by a Saudi monarch, the two countries have already struck a deal on weapons sales and discussed ways to continue to cooperate on stabilising the oil market. And as they have done in other cities, the Saudis made themselves at home in Moscow.

This week’s visit to Moscow is the first of its kind by a reigning Saudi monarch and marks a new departure in relations between the countries.