'Burmese Bin Laden' - The man behind the hatred against Rohingya Muslims 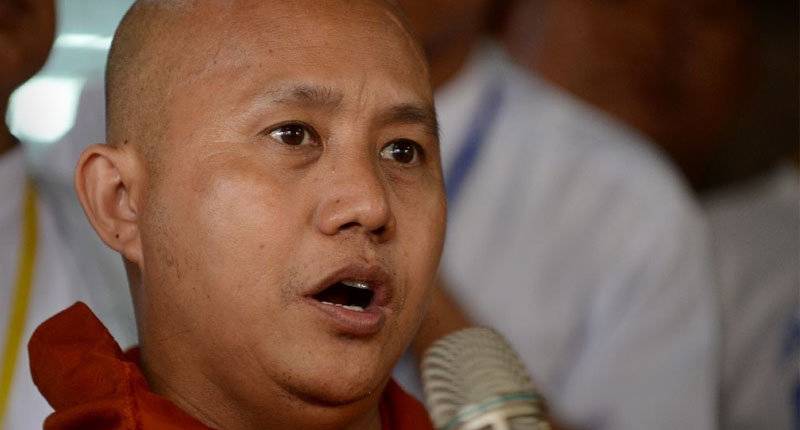 RAKHINE - Rohingya Muslims have been a constant target of hatred in Myanmar ever since the 1982 General Ne Win's government enacted the Burmese nationality law but another character to be blamed for a fresh wave of violence is Ashin Wirathu dubbed 'Burmese Bin Laden'.

Traditionally clad in orange and maroon robes, Wirathu is famous for anti-Muslim speeches yet he boasts about peaceful coexistence with the Muslim minority.

“I’m educating people not to launch counterattacks [against the Muslims] and preaching to them to live peacefully with people of different faiths.” he said in an interview to VICE News.

Born in 1968 in Kyaukse, a small town near Mandalay, Wirathu stated that he was inspired to be a monk from a young age as he joined an order in 1985.

'I had a passion for reading and writing but didn’t have a desire to give sermons until 2001'  Wirathu described.

The monk who enjoys widespread respect in Buddhist community opened up and said that in one of his lesson plans, he drew a map of Myanmar and told the children the history of the Bengalis, (“Bengali” implies that all of the Rohingya are recent illegal immigrants, though many of them have lived in Myanmar for generations).

In a bid to fuel the fire of hatred among the Busshist majority and Muslim minority, he would tell students how Muslims had travelled to Myanmar in order to trade and then ended up staying in the country permanently.

Going a mile more, Wirathu advocated the boycott of all shops that were Muslim-owned besides urging Buddhists to avoid socializing with Muslims.

His lessons for children soon earned him fame and saw a transition from mere lessons to sermons. Within a couple of years, he was a known face throughout Myanmar.

But Wirathu's mission was not over as he faced difficulty with the military in power and keeping a close eye on disturbance causing elements.

His hate-filled sermons landed him in jail in 2003 and was forced to give up being a monk.

“As soon as I was defrocked, I felt so low,” he said and added that he was tortured and humiliated while in jail.

After having spent 7 years behind bars, Myanmar saw a shift from military to civilian rule paving way for the self-styled monk to be released under a general amnesty.

He was allowed to return to the monastery and continued sermonising and preaching, taking advantage of the government’s leverage regarding on free speech.

In 2012, when the first of several widespread riots against Rohingya Muslims broke out in western Rakhine state, Wirathu emerged on the international map.

Though the monk advocates more freedom for people, yet he slams the government for around-the-clock surveillance of him.

COX‘S BAZAR, BANGLADESH - As inhumane violence at its peak in Myanmar, thousands of Rohingya are fleeing towards ...

'I’ve been threatened by the Islamic people. They’re going to try to kill me every chance until I die' he claimed despite being a face of  Myanmar's Buddhism and a known anti-Muslim character.

Wirathu deflects blame for violence in Rakhine and puts it on Muslims though he has been accused of executing bomb attacks in a bid to discredit Muslims living under constant threat.

The monk blames international media and human rights group for peddling a narrative, he believes is entirely fake.

'The world believes the made-up stories of the Muslim people. The Muslims make other people offer bribes to make up a story, to fabricate the news,” he says.

“Their sole intention is to occupy the Rakhine state forever. They hide behind the masks of human rights.”

The 49-year-old religious personality also justified his "Law for the Protection of Race, Religion and Language"? which requires any Buddhist woman who wants to marry a Muslim to receive permission from her parents and local government officials. It also require any Muslim man who marries a Buddhist to convert to Buddhism. If not adhered to, the groom could face up to 10 years in jail and the loss of his property. The bill was debated in the parliament but the Amnesty International advised against adopting the law.

'It is okay until Muslims force them to convert, this is always the case when Muslims and Buddhists intermarry. I think they are violating the freedom of religion.' he advocated.

The Buddhist-majority nation saw a fresh wave of intense violence in Rakhine state on August 25 when the country’s security forces launched an operation against the Rohingya Muslim community.

It triggered a fresh influx of refugees towards the neighboring Bangladesh but unfortunately, the country sealed off its border to refugees.

DHAKA, Bangladesh - Thousands of Myanmar’s Rohingya Muslims are fleeing to Bangladesh following a campaign of arson ...

Myanmar, formerly known as Burma, evacuated more than 11,700 “ethnic residents” from the area affected by fighting, the army said, referring to the non-Muslim population of northern Rakhine.