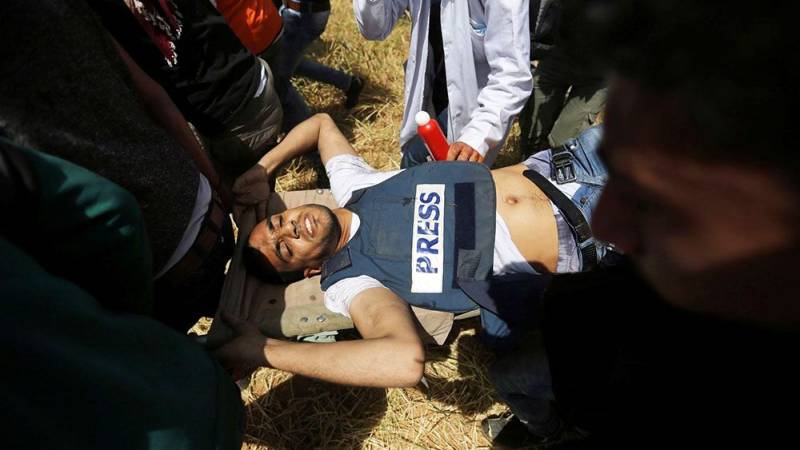 GAZA - A Palestinian journalist has died after wounded by a bullet by Israeli soldiers during protests near the border between the Gaza Strip and Israel, according to a statement from the health minister of the Palestinian enclave.

Yasser Murtaja, a photographer with Gaza-based Ain Media agency, was wearing a clearly marked press vest when wounded on Friday. He died from his injuries in hospital - the 28th Palestinian killed in a week.

Hundreds attended Murtaja's funeral on Saturday, in which his body was wrapped in a Palestinian flag and a press flak jacket placed on his stomach.

The 30-year-old was one of nine Palestinians killed on Friday. No Israelis and at least 491 Palestinians were injured, according to Palestinian and Israeli officials.

An Israeli military spokeswoman said it was reviewing the incident.

"The IDF [Israeli Defense Forces] does not intentionally fire on journalists," a statement said according to Israeli website Ynet News. "The circumstances in which journalists were hit, allegedly by IDF fire, are unknown to us and are being examined."

Thousands of Palestinians gathered on Friday near the security fence that separates Palestinian territory from Israel to demand the return of some 700,000 Palestinians expelled from their land or who fled during the war that broke out after the creation of Israel in 1948.

Protesters torched tires and threw stones at Israeli soldiers, causing smoke over the security barrier to obstruct the visibility of the Israeli army. The military responded with tear gas and real bullets.

UN Secretary General António Guterres called on all parties to "avoid confrontation and exercise maximum restraint" after 19 people were killed and hundreds of others wounded during similar unrest a week ago.

The Israeli government has long ruled out any right of return and says ‘terrorists’ are using the cover of the protests to try to cross illegally into its territory.