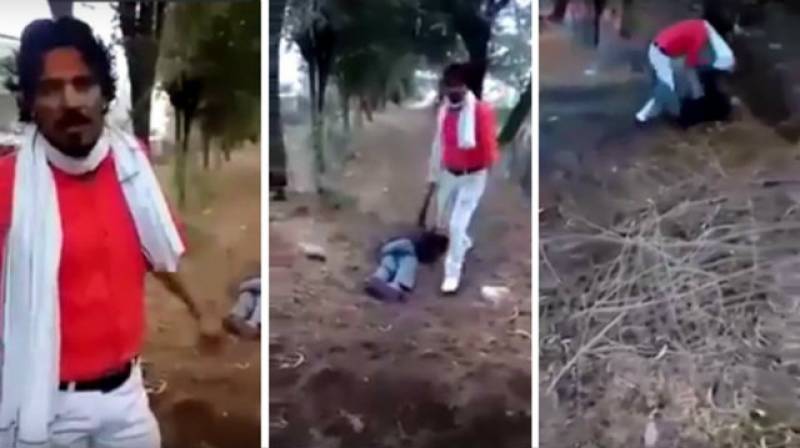 JAIPUR - Police in the north-western Indian state of Rajasthan have arrested a Hindu man who hacked a Muslim man to death and set him alight before sharing a video of the religious attack.

Internet has been suspended in Rajsamand - around five hours from state capital Jaipur - to stop the circulation of two video clips posted on WhatsApp by the killer, identified as Shambhu Lal.

NDTV reported the police believe a half-burnt body they found Thursday morning near a road in Rajsamand could be that of the victim - 45-year-old Mohammad Afrazul, a daily wage earner from West Bengal. The father of three had worked in Rajasthan for 20 years.

Shambhu Lal has been arrested and his 14-year-old nephew, who allegedly filmed the videos, has also been held. The killer's 11-year-old daughter is seen in one of the videos.

In one of two clips posted online, Shambhu Lal, in a red shirt, white trousers and a white muffler, is seen leading Afrazul to a spot in the woods.

Shambhu Lal follows him and attacks him repeatedly with an axe. Loud wailing and screams for help are heard as the video becomes increasingly difficult to watch.

When the victim falls silent, the murderer Shambu Lal warns Muslims, saying: "This is what will happen to you if you do 'love jihad' in our country."

The term has been popularised by radical Hindu fringe groups, who accuse Muslim men of participating in a "conspiracy to turn Hindu women from their religion by seducing them".

"If I have to die, I will kill some and die," he says, making references to Ayodhya, the Padmavati film controversy and the Hindi film PK, which featured a romance between an Indian and a Pakistani. Apparently referring to Hindu-Muslim relationships, he threatens to "find each one of them and kill."

"It is shocking how he killed the man and made a video of it. The accused has been arrested and a special investigation team (SIT) has been set up...Any person will be disturbed by the video," state Home Minister Gulab Chand Kataria said.

In a second video, the man is seen justifying the incident to "protect the honour of Hindus against Muslims".

Senior police official Anand Srivastava told the media that they have found that nobody from Shambu Lal's family had an inter-religious marriage.

The opposition Congress said the murder on video proves there is no governance in Rajasthan.

Police have been deployed in large numbers to keep the peace.

Nearly ninety percent of Rajasthan's population (73,529,325) is Hindu with Muslims making up the largest minority with eight percent of the populations.

ALWAR- A Muslim man who was attacked by Hindu vigilantes while transporting cows in India breathed his last, police ...

In April this year, a Muslim man was beaten up to death by cow vigilantes in Rajasthan's Alwar district. Pehlu Khan was among a group of nearly 15 people that was attacked while transporting cows.

He was also not the first Muslim to have been attacked by radical Hindus in India, where the violent acts of religious intolerance have increased since Narendra Modi came to power.