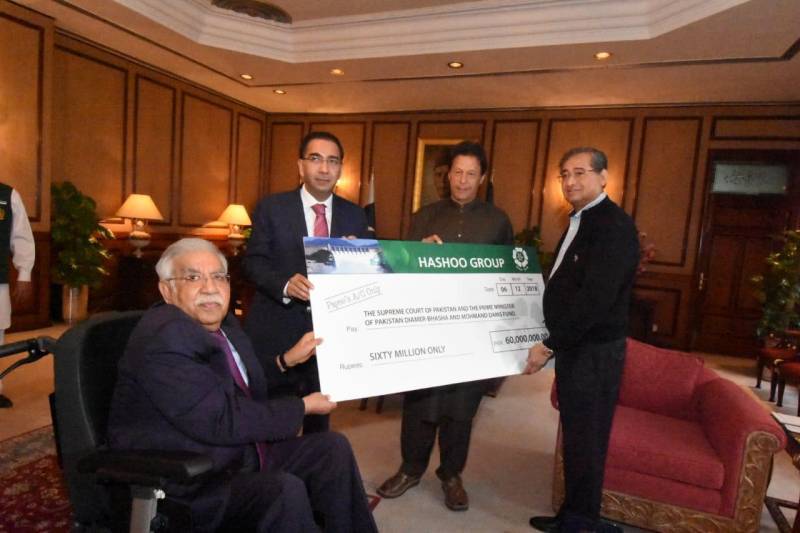 ISLAMABAD – Chairman Hashoo Group and renowned businessman Sadruddin Hashwani on Friday reached PM House to contribute to the Supreme Court of Pakistan and the Prime Minister of Pakistan Diamer-Bhasha and Mohmand Dams Fund.

Hashwani, 78, presented a cheque of Rs60 million to PM Imran Khan, who appreciated the businessman’s gesture to donate generously for the national cause, the Radio Pakistan reported.

Hashoo Group is a Pakistani multinational conglomerate headquartered in Islamabad founded in 1960 by Sadruddin Hashwani in Karachi. Mr Hashwani has an estimated net worth of Rs115 billion (Figures as per Sep 26, 2017).

LONDON - In order expedite funds collection for the construction of water reservoirs in the country, Chief Justice of ...

Khan said that his government was working to construct large water reservoirs in the country to address the issue of water shortage in the country.

The CJP donated Rs1 million for the dams fund and asked the countrymen to follow the suite. Pakistan’s armed forces have contributed Rs1 billion for the cause.

PM Imran Khan has also urged the citizens to actively take part and donate to the fund so that the dams should be built to save future generations.