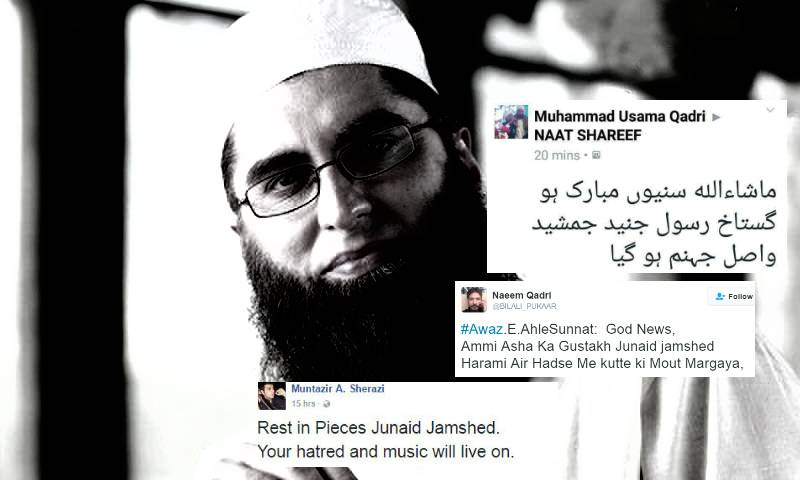 The tragic and untimely demise of renowned preacher Junaid Jamshed in a plane crash have stirred mixed emotions from all the sections of the society.

Junaid, who began his career as a pop singer in the 80s rose to fame and became an icon of Pakistani youth,  left the music industry in 2014 after a spiritual awakening, choosing to devote his life to religious activities.

While the national icon is being lionised as a great philanthropist, singer and a scholar, there is this section of our society with "paranoid tendencies" and obstinate grudges and is constantly busy in vilifying the deceased.

As soon as the news of Junaid's death went viral, these human cockroaches took to the social media and got indulged in their most favourite hobby - spewing venom against people they don't agree with and take the charge of morality brigade.

Some took on the deceased for being the "blasphemer" and an "apostate" while others unleashed hatred and hostile tweets for being a religious fanatic and a misogynist or 'sexist'. 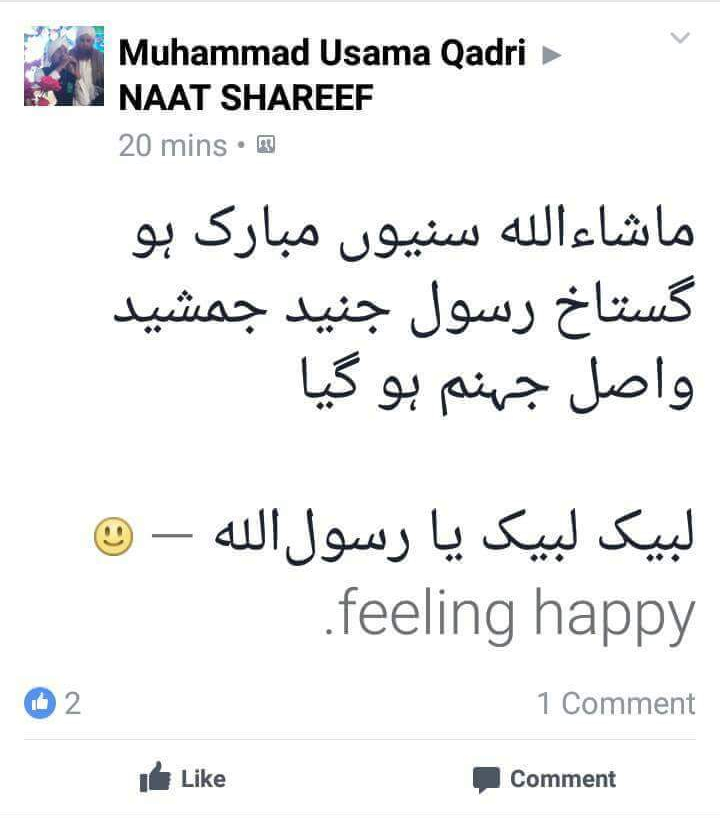 Quite paradoxically, Junaid who was disowned by the religious communities after one of his controversial religious sermons, "feminists and liberal" community too didn't 'tolerate' him either and never appreciated Junaid's right to freedom of speech, the principle which is ironically held as liberals' asset. 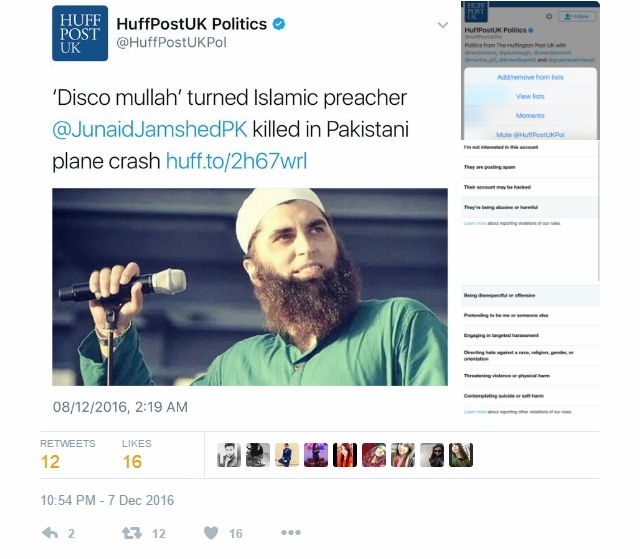 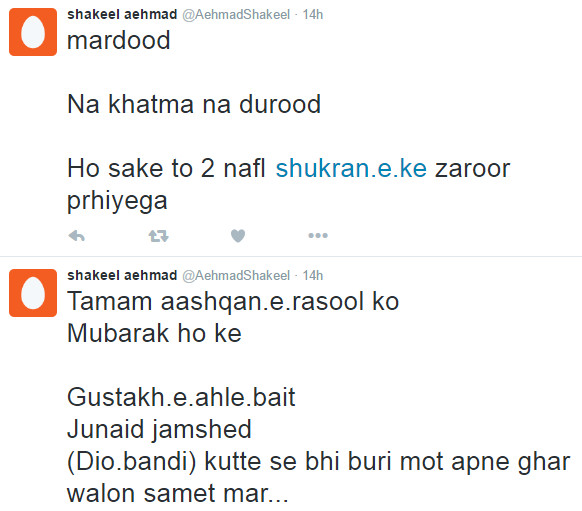 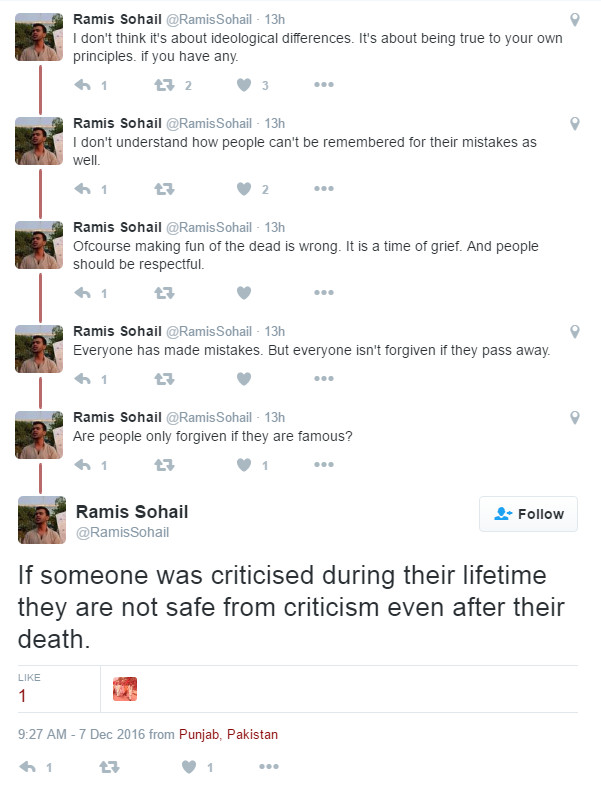 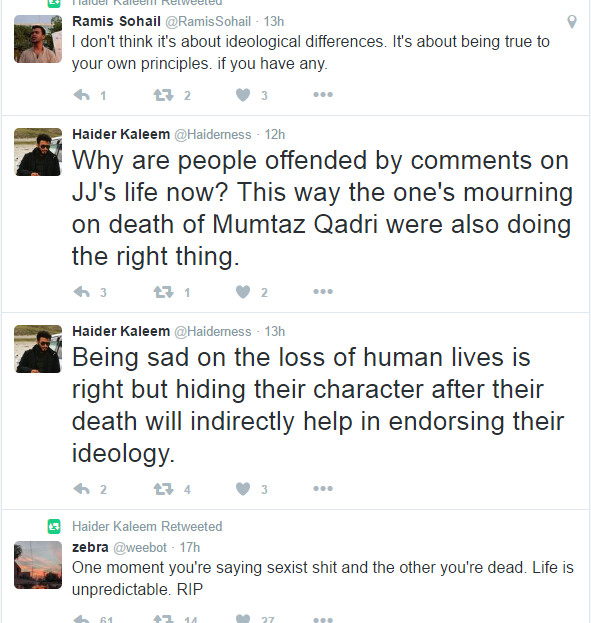 Some entertained themselves with the black comedy and played the 'feminist' card to vent out their religious biases and prejudices while on the other hand, those who couldn't afford the label of feminist spewed the venom under the religious disguise.

The most saddening and appalling thing is that people have shared these things publicly. Deaths of those innocent passengers have given us an opportunity to have a look at the ugly and dead conscience of these moral brigades. No conscientious human can be happy at death. 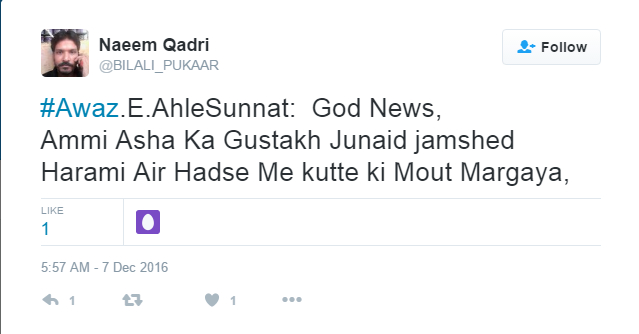 It seems that feminists and religious extremists calling blasphemy on everything have one thing in common: their ability to be outraged by everything and potential to be as vile creatures as humanly possible.

The tragic plane crash has not only revealed the poor state of affairs in the aviation or airlines, it has also revealed the astonishing and disgusting tendencies of these two extremes of reacting over such national tragedies and use it for personal prejudices.

It is now confirmed that the evolution of major part of this society has been halted or gone wrong somewhere which resultantly produced these kinds people, who resort to extreme in their ideologies. And use labels as pretexts for their immature mentality.

These people presented their theories and sought the higher sort of perfectionism in the deceased and cherry-picked what suited them and their grudges.