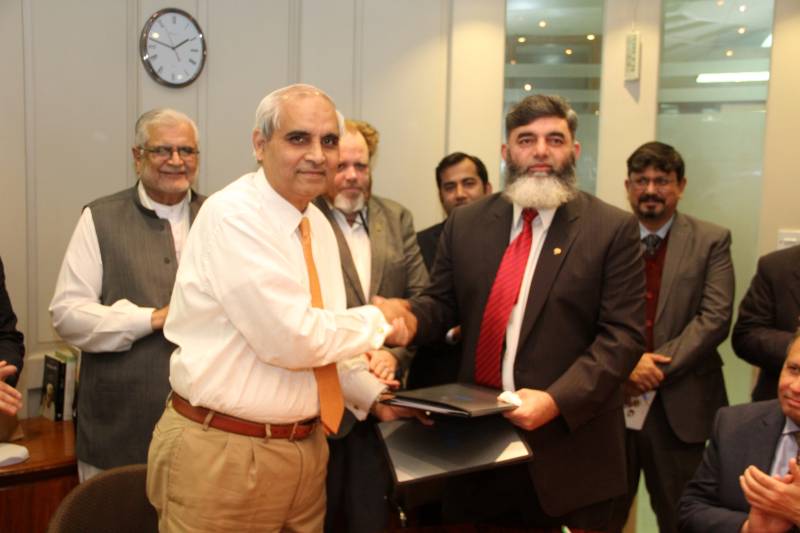 LAHORE - The South Punjab Forest Company (SPFC) and National Rural Support Programme (NRSP) have signed a Memorandum of Understanding (MoU) to help Pakistan build resilience to climate change by improving the forest cover of Punjab through an increase in private investments and CSR activities.

The MoU was signed on Monday by the CEOs of both the organisations, SPFC's Tahir Rasheed, and NRSP's Dr Rashid Bajwa, in the presence of senior representatives of World Wide Fund for Nature-Pakistan (WWF-Pakistan) and Green Climate Fund (GCF), specially invited to witness the signing ceremony.

SPFC CEO Tahir Rasheed, while commending the work of NRSP in alleviating poverty, stressed on the fact that the mandate of NRSP is in-line with the mission of SPFC, as SPFC plans to create 15,000 direct and indirect green jobs in South Punjab and lead to revenue generation of Rs242 billion, which will help to eradicate poverty in South Punjab.

He further said: "SPFC's initiative will help to achieve Sustainable Development Goal (SDG) 1 ‘no poverty’ as poverty will be substantially reduced through the influx of billions of rupees; SDG 13 ‘climate action’ as 5.6 million tons of carbon dioxide will be sequestered; and SDG 15 ‘Life on Land’ which calls to protect, restore and promote sustainable use of terrestrial ecosystems, sustainably manage forests, combat desertification, and halt and reverse land degradation and halt biodiversity loss."

Dr Rashid Bajwa thanked SPFC and dignitaries from GCF and WWF-Pakistan for attending the signing ceremony. He was of the opinion that the initiative was taken by the Government of Punjab will help to restore the dwindling forests and also helping to create rural jobs for the community.

As NRSP’s GCF accreditations are currently under process, the understanding between SPFC and NRSP will explore synergies to secure climate finance that will be utilized in the forestry sector to help reduce the vulnerability of Punjab to climate change.

The GCF is established by the United Nations Framework Convention on Climate Change (UNFCCC) to assist the developing countries to adapt and mitigate climate change. GCF will help to raise climate finance of up to the US $100 billion a year by 2020.

NRSP is section 42 (not for profit) company engaged in an alleviation of poverty and rural development. With a presence in 65 rural districts, NRSP stands the largest rural support programme of the country.