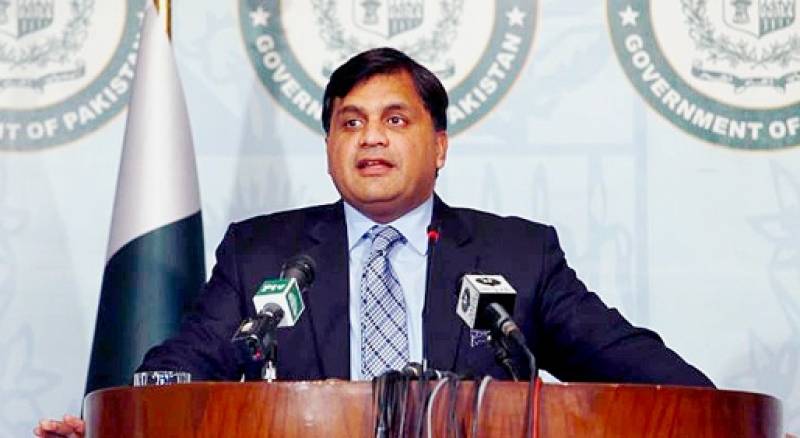 ISLAMABAD - Foreign Office Spokesperson Dr. Muhammad Faisal says Pakistan, Iran, and Russia have raised concerns about the growing presence of Daesh elements in Afghanistan and its implications for security and stability of the country.

In his weekly news briefing in Islamabad on Thursday, he said Pakistan actively participated in second Kabul meeting in pursuance of its policy to take part in all multilateral forums geared towards peace and stability in Afghanistan.

The foreign office spokesperson said that Pakistan is committed to an Afghan-led and Afghan-owned resolution of Afghan crisis for regional peace and stability.

He said during the meeting Pakistan, Iran, and Russia raised concerns on the growing presence of Daesh elements in Afghanistan and its implications for security and stability of the country.

Dr Faisal said peace and stability in Afghanistan is a shared objective for both Pakistan and US and Pakistan is extending all-out cooperation to achieve this end, visit of Foreign Secretary to the US is part of the continued engagement with the United States and is reflective of our common desire to work together to achieve peace and stability in Afghanistan, he added.

About India, the spokesperson said Pakistan has actively raised the issue of Indian ceasefire violations along LoC and Indian Deputy High Commissioner J.P. Singh was summoned to the foreign office to protest over the shelling and killing of innocent civilians.

He said despite calls for restraint, India continues to indulge in ceasefire violations. In 2018, the Indian forces have carried out more than 400 ceasefire violations along the Line of Control and the Working Boundary, resulting in the martyrdom of 18 innocent civilians and injuries to 68 others.

Amnesty International (AI) in its Annual Report of 2017-18 has highlighted the impunity enjoyed by the Indian forces for human rights abuses in the Indian occupied Jammu and Kashmir, the spokesperson added.

He said despite India's uncooperative attitude, Pakistan has continued to work for improved treatment of prisoners as a humanitarian gesture including suggesting the exchange of prisoners above 60 years of age and child prisoners, below 18 years of age.