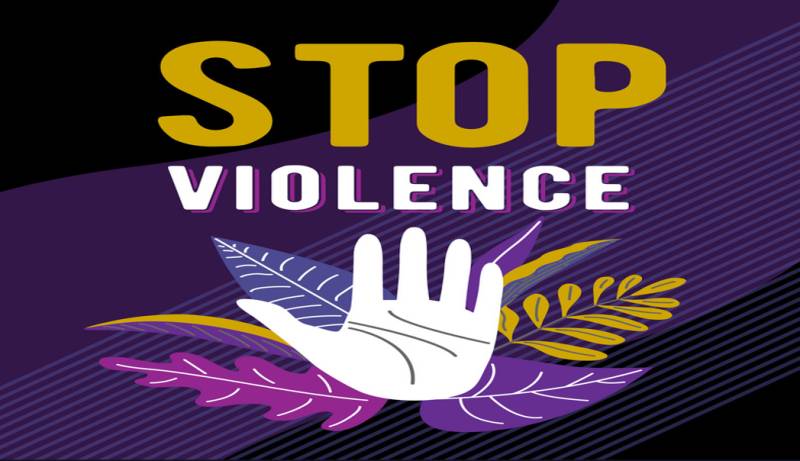 Domestic violence is an insidious criminal mindset behind the act, where a woman is commonly seen as the main victim. Former Secretary-General United Nations, Ban Ki-moon stated that “there is one universal truth, applicable to all countries, cultures, and communities: violence against women is never acceptable, never excusable, never tolerable”. In this regard, Pakistan is ranked the sixth most dangerous country for women, and ranked fifth in domestic violence, according to the Thomson Reuters Foundation survey 2018. It is commonly seen that domestic violence against women is context-specific and general. The social norms and culture seem to be favorable in Pakistani culture to those women who phlegmatically bear marital abuse. However, women who seek legal procedures against this crime look distrust on relying upon justice. Other than this, religious teachings are often misinterpreted. Craig Scott stated that “from every wound, there is a scar, and every scar tells a story, a story that says, I survived”.

Regarding the effect of domestic violence on other people in the same domestic setting, it varies from person to person. It is analyzed by Lucy knight and Marianne Hester (2016) in their research that domestic violence is associated with the physical and mental health that severely affected the health of a victim. There is evidence that older age victims experience less psychological distress as compared to younger ones. Furthermore, the study suggests that domestic violence identification by older adults is poor and there are limited support and referral options. Children are seen at higher risk for emotional behavioral problems regardless they are directly or indirectly abused or not. In this circumstance, they are likely to develop anxiety, depression, academic problems, and fear. Studies have shown that the domestic violence consequences can last long stated by Ellsberg, Jansen, Heise, Watts, and Garcia-Moreno (2008). Further added that the frequency, timing, and type of experienced violence affect the health of victims. Another study by Dobash and Dobash (2004) indicated that violence from men towards women differs from women toward men, not in terms of severity, frequency, and consequences, but also terms of sense of safety and well-being of the victim. The higher impact of abuse on well-being and sense of security is dependent on the more recent and frequent abuse.

In the Pakistani context, it is unfortunate that discussing abuse-related issues is presumably disrespectful to the privacy of a family. But, it affects all in the same domestic settings per their age categories.  It is important to overcome the hesitation by approaching and discussing the issue. Honor Blackman stated that  “domestic violence can be so easy for people to ignore, as it often happens without any witnesses and it is sometimes easier not to get involved. Yet, by publicly speaking out against domestic violence, together we can challenge attitudes towards violence in the home and show that domestic violence is a crime and not merely unacceptable”.  According to Human Rights Watch 2021 that received data on domestic violence in Pakistan indicates an increase of 200 percent cases from January-March 2020, and further worsened after March during COVID-19 lockdowns.

I feel pity for the status quo domestic violence mindset in Pakistan. In which, husband or a male member feels to be dominated and feel fully authorized to use physical force on women for his wish whether he is on the right path or not? Is this a status and value of a woman in Pakistan to be exploited in the hands of male members without any reason? Who has the authority to control these sorts of criminal acts? and they keep doing it without any fear. How these criminal-minded people can be caught and brought on the platform of justice? Is a woman not having any worth in society, where she has proof of domestic violence but is dependent on courts for justice? Why is our society giving more courage to these sorts of people to keep showing their domination with the cruel act of violence on a woman? These are absolutely the same symptoms that are highlighted by the ‘Domestic Abuse Intervention Project, Duluth’ model where the husband used threats and coercion, using intimidation, using emotional abuse, using isolation, using children, minimizing denying and blaming, using male privilege, and using economic abuse. 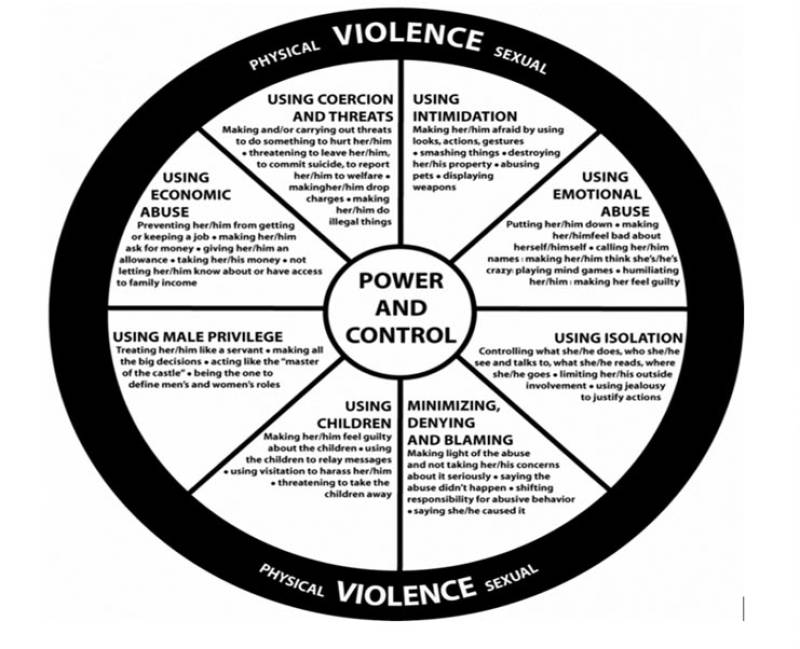 A lot of queries are in line with the provision of justice to the victims of domestic violence. We have seen recently; a young man jumped into rikshaw and harassed a girl by holding her. In another case, a woman was mishandled at Minar-e-Pakistan by nearly 400 people who went there for making her video for the social platform. On the occasion of Independence Day on14th August, it was seen that youngsters were stopping a motorbike where a girl was sitting with her brother, and in no time, the youngster grabbed her in his arms. In a horrifying incident of Noor Mukadam, a criminally minded man brutally murdered Noor on refusing the marriage proposal. In another case, a wife was attacked by her ex-husband with acid. A motorway horrifying incident of raping a mother of two cannot be forgotten. The famous case of Khadija Siddiqui of 2016, who was stabbed 23 times by Shah Hussain is still fresh in our minds. Hussain was sentenced to five years imprisonment but was released after 3.5 years. Keghad Baloch, a woman in her 50s was allegedly tortured and murdered by security forces in Kech, Balochistan. Still, there was no justice provided to her. In 2020, Maliknaz Baloch was brutally murdered at home during an armed robbery, and men were sent to the local leader for settlement that was supported by the establishment to counter Baloch separatists stated Hafeez (2021) in her article. Thus, the cases of violence against women are seemed to be taken as lightly and solutions require acknowledging the problem and openness in discovering the uncomfortable truth.

These are a few of them which caught the limelight. Other than this, there are a lot of other cases which are behind doors or not able to be highlighted. It's astonishing where our society is moving ahead. We are living in the Islamic Republic of Pakistan, are we responsible for a woman's safety as seems that every step which a woman wants to take out for her and her family’s bread and butter is full of fear. A woman in Pakistan seems to be being mishandled by those criminally minded people who want to show their domination by their cruel attitude towards them. There is a need for strict surveillance and laws for the safety of a woman. Unless and until the authorities who are being paid for their services don’t act responsibly, the others will take them for granted. There is a need to uproot this mindset and practice strict checks and balances. No doubt, with these measures, fear will be able to control some part of it.

Keeping in view the Pakistani culture, the unrelenting negative consequences of domestic violence on women’s mental health, several researchers have observed and identified various risk factors such as religious practices, social and cultural norms, economic and political circumstances stated by Tazeen, Nargis, Ingrid and Gunilla (2011) in their study. Repeated violence committed by a husband towards his wife has become an extremely common phenomenon as seen. Activists are observed blaming society’s patriarchal attitudes for the problem of domestic violence. A joint voice is requested from the government and society for this cause as violence against women in Pakistan is seen on the rise that is unacceptable to be ignored. Additionally, with the demand for comprehensive reforms. Various reforms and laws against domestic violence are seen from time to time introduced by Pakistan. But, still, some challenges remain in the implementation of proper measures. The Constitution of Pakistan also ensures the security of women against any form of violence in Articles 3 and 11. Besides, the Status of Women Bill 2012 by the National Commission, the National Policy for Development and Empowerment of Women (NPDEW) 2002, and the Punjab Protection of Women against Violence Act (PPWVA) 2016 are currently implemented. People’s Party Senator Sherry Rehman tabled the Domestic Violence Bill in July 2020 to be debated on floors of the Senate and now Human Rights Minister from Pakistan Tehreek-e-Insaaf, Dr. Shireen Mazari also tabled Domestic Violence Prevention and Protection Bill 2021 and introduced a helpline.

Many women still do not have the access to authorities for their rights. There is a need to ensure the safety, protection of a woman who is being abused unnoticeably by the surroundings. It’s a loud CALL and VOCIFERATION to the authorities to listen and make it possible to provide timely justice. In this regard, the implementation of the recently introduced Bill on Domestic Violence (Prevention and Protection Bill 2021) would be highly beneficial if finalized. There is a need today to stop such harassment and violence cases where this Bill means of all sorts of mental, physical, emotional, economic, sexual abuse committed against the women, girl or a vulnerable person with whom a respondent has a domestic relation that causes physical, mental and psychological harm.

‘Trauma may happen to you, but it can never define you’ -Melinda Longtin-

In conclusion and recommendations to prevent domestic violence, proper investigative procedures, codes of conduct for police, lawyers, magistrates, health professionals, as well as institute measures are required to be adopted. Convention on the Elimination of All Forms of Discrimination against Women (CEDAW) 2020 also shows concerns in Pakistan on lack of awareness concerning gender-based violence against women and girls with high prevalence and acceptance of domestic violence. It was suggested for proper training and awareness among the authorities to tackle this problem. All eyes are on the authorities now, how this problem going to be handled and make the country safer for all women. There are different layers, and nuances also heard to the feminist movement in Pakistan in different parts. But in real terms, all women collectively in a country want the state to ensure their safety. Enough hashtags have been seen on the cries for justice; now it is the real-time to be focused on preventive and implementing steps on delayed agenda. In this regard, United Nations also warned abusers (https://www.un.org/en/coronavirus/what-is-domestic-abuse) on mistreating their partners, and are subjected to criminal prosecution under the basic human rights law.

Dr. Saira Asad is a Ph.D. from Universiti Tun Hussein Onn Malaysia (UTHM), Malaysia. She is a researcher, award-winning columnist, and Adjunct Asst. Prof at Riphah International University, Rawalpindi. She can be contacted at saira.asad2011@gmail.com.

The writer is a Ph.D. from Universiti Tun Hussein Onn Malaysia (UTHM), an award-winning columnist, researcher, and Adjunct Asst. Prof. at Riphah International University, Islamabad, Pakistan. She can be reached at ...

The beasts of violence, art and love