On the Wrong Side of History 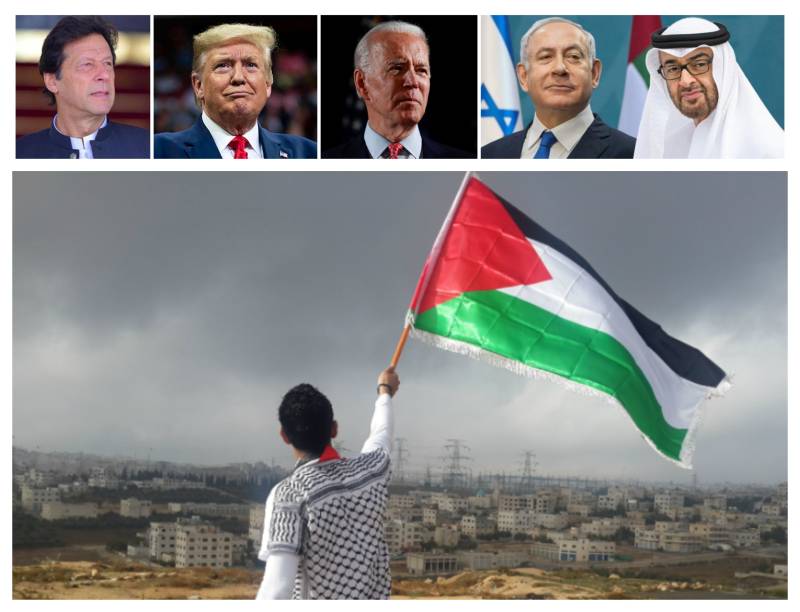 Potential steps taken by the UAE government in order to normalise relations with Israel without consulting OIC member states, has started a new debate if it is a good time to forge alliances with Israel. With this move, Pakistan is also being affected and the discussion is being carried out in regards to engaging with other Arab countries about the issue. This dialogue will aid in assessing our position. Moreover, due to the outbreak of the second wave of the Covid-19 pandemic, among various precautionary measures, the UAE has also temporarily suspended the issuance of visa for 13 countries – Pakistan being one of them. However, the visa categories still remain ambiguous.

Considering the most hyped topic of current times: the Arab-Israeli ties, Pakistan’s beloved Prime Minister Imran Khan quite rightfully said that Pakistan will never accept Israel until our brothers are given their due rights and homeland. An argument about accepting Israel is that we cannot afford two enemies at a time; hence, the Indo-Israel partnership needs to be broken. We must understand that the present US government is pressurising all parties to accept some sort of peace agreement, and solve the issue while standing firm with Israel.

In the mainland US, the opinion about Israel is changing, and the US is not that strong partner of Israel as it was decades ago. The Trump administration is the last-ditch effort of Conservative Americans to bring a halt to the ongoing changes about everything. They want their America back while not realising that change is inevitable; it is a constant phenomenon. No one in the history has ever succeeded in stopping the change from taking place.

From building the walls on Mexican border to banning foreigners from entering US, they are performing every possible gimmick to stop the wheel of change. As we need to reassess this argument, the Israeli policy has its own merits; we must understand that Israel is not a military threat to Pakistan. It is a very small country faraway from our borders. It does not hold blue-water navy that can reach us - also, its air force is weak as it only carries raids on defenseless Palestinians.

In 1973, Israel lost Yom Kippur war to Egypt, and ended up losing control over Sinai Peninsula. In 2005, Israel again lost to a very small contingent of Hezbollah in Lebanon. Such weak country can’t be a threat to a developing and robust economy of Pakistan with a Population of 200 million (2017 consensus) and 6th largest military power in the world.

Technology transfer from Israel to India is possible and has already begun, but India is free to get technology from any country - be it Russian, American or European. Hence, transfer of technology or weapons from Israel to India will not make any difference in Indo-Pak deterrence equation. Instead, close relationships with Israel will keep India away from Iran and other Gulf countries.

When a lobby here is trying to mend Pak-Israel relationships, we must understand the present difficult diplomatic position of Israel and troubles it is facing from its old partners. Twelve of European countries have already recognised Palestine as a free sovereign state. Soon, five or six or even more EU countries are going to do the same. Rest are putting pressure on Israel to put an end to its brutality and butchering of Palestinian men, women and children. They are signaling Israel to accept Palestine as soon as possible.

Sympathy with Israel diminished in the era of US and EU’s new generation, which was due to pain and misery the Jews faced in World War II. Currently they recognise Israel as a child killer which does not hesitate to bomb even hospitals and Red Cross tents. In the past, Israel enjoyed its cordial relations with the former-USSR and the US. At present, Russia is trying to partner up with Gulf countries and openly invites Saudi Arabia for a civilian nuclear program. Iran is already strategically closer to Russia and enjoys a lot of support from it. Both Iran and Saudi Arabia are trying hard to get hold of modern technologies, and also to develop their economies so that they can free themselves from dependency. Sooner or later, Iranian regime will undergo a change and liberals will get the upper hand. The revolution of Iran is getting weaker, contrary to which, the anti-revolution forces are getting stronger. This shall change Israeli status in the region, turning in the favour of Palestinians.

The United States, on the other hand, clearly understands that the status quo is damaging its reputation in the Muslim world, and a plethora of opposition comes from its support to Israel. The incoming President Joe Biden's recitations and translations from the holy Quran is one way to attract the Muslims, and to improve the American image among the Muslims around the globe. They are changing their Israel policy and it can be seen if looked at carefully. Despite plenty of Israeli lobbying and media control in the USA, the Democratic National Party is viewing formula of two separate states (Israel and Palestine) as a solution. Republicans are close supporters of Israel for now, and President Donald Trump is resisting sane voices in Senate and Congress; yet in long term, Palestinians seem to be winning the hearts and minds in both upper and lower houses of the US.

UN General Assembly resolution 67/19 that was passed in 2012, gives Palestine a partial recognition as a sovereign state.

In 2014, Barack Obama tried to fix a nuclear deal with Iran and shift its Israeli policy. This was not welcomed by Israel and their community became active. They lobbied to call Prime Minister of Israel Netanyahu in US Congress where in March 2015, he delivered a speech. His speech depicted his frustration and pent-up anger. His body language was seen as a man fighting a lost case. The US media called this speech all rhetoric and nothing concrete or problem-solving. Obama’s administration, conversely, became angry because Congress neither informed him about this speech nor got his permission. Democrats considered it an affront to the president. It showed an underlying issue of lobbying in the USA which is damaging even interests of US. Things went against Israel as Obama administration clearly informed the Congress that it was not going to get well. Sixty of the 232 Democratic members of Congress boycotted this address. Their absence was particularly striking and it showed the shift against Israel. In this entire situation Israel received another blow.

In 2016, United Nations Security Council (UNSC) passed resolution 2334 in the favor of Palestine, and called Israeli settlement as occupied. It was a big achievement for Palestine and a huge setback for Israel. It was passed by 14-0 votes by the UNSC members including Russia, China, France, and United Kingdom. United States abstained from voting, although everyone knew that without the USA’s support it was not possible. Previously, the US always vetoed any such resolutions.

Israeli Prime Minister Netanyahu, accused Barrack Obama of orchestrating this resolution, campaigned and lobbied against him in the US. Obama in response told Israeli officials that it has to stop the way it is behaving and the US will not always be there to lend its support. Thus, Israel must behave responsibly and resolve its issues with Palestine peacefully; otherwise, the world will hold Israel accountable for all the wrongdoings. We must understand that former President was very close to American establishment, and his views on foreign policy were of the incredibly powerful institutions in the United States.

In this background, it is very important for Pakistani policymakers to not hasten and conclude our relationships with Israel. We must have confidence in our own ability to get things done. We also must understand that there is difference between Jews and Israeli Zionists. Many Jewish organizations inside US are lobbying for Palestinians and notable people like Noam Chomsky are openly criticizing Israeli policies towards them. If Pakistan starts its diplomatic relationships with Israel, it will be devastating for the advancement of the Palestinian struggle. Pakistan has always stood with victims through all these years, and now when Palestinian struggle is at the crucial point, we must not nullify our efforts and lose the face in front of young Palestinians who take us as saviors and guardian angels. Past Pakistani governments have tendencies to throw all the good results of hard work. We always ended up in making bad decisions. Please do not end up on the wrong side of history this time.