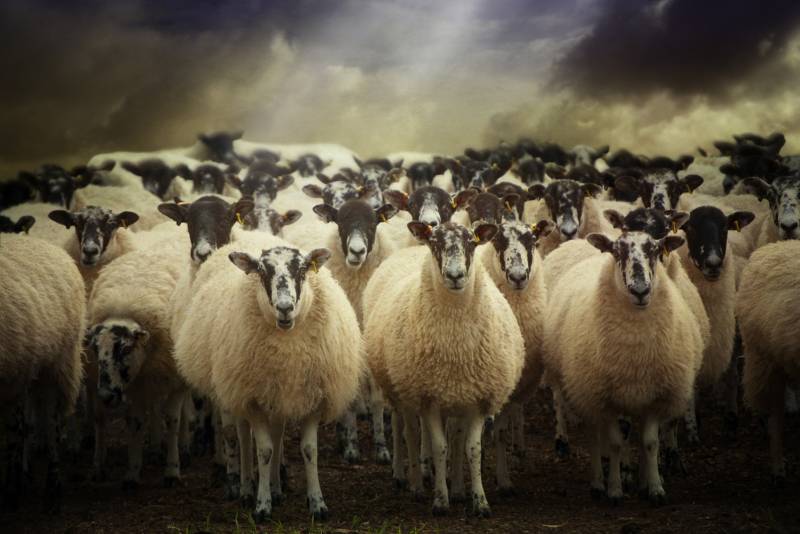 That’s a catharsis of one’s mind. But the question remains whether the voice emanating from a mind is from one's inner self or influenced by another soul?

Being original and yet captivating is a blessing and rather a rarity. One can be inspired by a dozen things around him or her and that’s reflected in the work of an individual. Originality ensures that any particular action done by an individual comes right from the heart.

But can one’s originality be affected or even subdued while in a group or even a herd?

The literal meaning of herd is a large group of animals of the same type that live and move together. The shepherd moves them with a stick, sometimes politely , sometimes harassing them, hitting them hard forcing them to move in the direction he intends to move them into. Is the shepherd wary of the fact that on any given day, maybe he tries to hit the animals hard, or tries to force them to take a particular path, they might just revolt and kick the shepherd so hard in the groin that he would actually forget what his stick is meant for?

What if the sheep decide to stick their heads together one day and decide enough is enough. We can no longer allow ourselves to be dictated by a guy with a stick whose mere purpose is to spread terror amongst the group? Who only allows them to halt at any place for munching at his own free will? Who gives them a particular path to walk and not deviate from that? Perhaps one sane sheep of the lot starts to think differently and becomes a self-proclaimed leader of the herd? Would that sheep be sacrificed by the shepherd to curb the revolt? Or the rest of the sheep may come to the rescue of their leader backed by a few timid ones posing a serious threat to the shepherd? Whatever the case, its the perseverance that emerges victorious.

Talking about humans, well we aren’t different from the sheep as well. We prefer to move in groups, hang out, eat together. The group is always dominated by a person who possesses some leadership qualities or acts as if he or she is more knowledgeable or adept at taking decisions more effectively than the others. That automatically turns him/her the undisputed leader. His/her views become divine thoughts in the group. No one can even dare try to challenge those thoughts and if someone tends to disagree with that then he or she will pretend that’s the end of a relationship just like a perfect fairytale wedding gone sour. Most of the people in the group actually end up proclaiming him/her as their spiritual father/mother.

So if somebody starts to think differently or takes an opposing stance, he's considered to be an outright rebel ; an entity that our society shuns at every level. He or she is considered to be someone who has gone astray , or influenced heavily by the bad sections of the society. The so-called pious members may think that he/she has been subjected to an evil eye and thus needs some serious spiritual cleansing to ward off all the negativity or the dirt that has polluted his/her mind.

Unfortunately, today it has become increasingly easy to influence the minds of our generation via electronic and social media. There are certain anchors and writers who have their own viewpoint regarding certain issues, but their sole purpose remains to engage or draw in the minds of the people forcibly towards them. They have a clear understanding of the issue that most of the people will just be drawn in by their rhetoric without giving it a second thought ; the problem being their less access to books or other readable material which may help in refining their own thought process.

The overall concept of thinking via ones own brain or listening to ones inner self is slowly diminishing, at least in our society. Possibly, because the pace of life is increasing dramatically, the ability to think individually is also receding, thus compromising the level of quality . Reading books has become a thing of the past, now individuals relying solely on information online and that too on most occasions which are devoid of any substance.

So the whole point of life is to sit down, think and jot down some points pertaining to the purpose of our life, what we in particular are  good at? How can one contribute effectively to the betterment of the society without getting influenced by another source is the key and the need of the hour.

The writer is a creative writer who promotes and appreciates liberal arts, and an aspiring actor. He can be reached at saad.khalid39@gmail.com