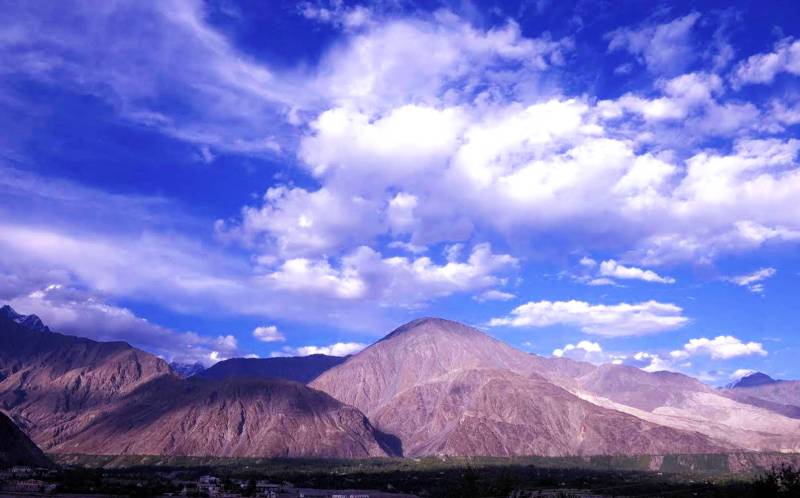 Gilgit Baltistan, situated at a high altitude in Himalayas, Koh Hindukash and Karakoram mountain range, is bestowed with many glaciers. It provides water for low land areas of Pakistan, but over the past few years the area is suffering from unpredictable weather patterns and the frequency and intensity of extreme weather events especially Glacial Lake Outburst Floods (GLOFs). Flash floods and land sliding is making the lives of mountain people even worse, triggering migration in the area.

According to government officials, due to an increase in torrential rains, floods and landslide-related incidents in the northern areas of Pakistan, especially Gilgit-Baltistan, many people have started migrating and leaving their ancestral homes behind.

Sixty eight years old Ishaq Khan who lives in Damas Valley of Ghizer district shares his story about how torrential rains and floods washed away his entire village five years ago. Although he has managed to build a small house, he has been unable to clear his orchard buried under tons of silt from the floods.

Even during this summer, the fear of floods in rainy seasons has deprived Ishaq of a sound sleep. “Danger of these floods is still looming and I am unable to go anywhere else. I have no money and land elsewhere for resettlement,” said Ishaq.

His neighborhood is deserted after most of the residents moved to Islamabad, Gilgit and other areas for resettlement and to earn their living. “Where should I go?” wonders the sexagenarian whose hands were shaking while talking to Daily Pakistan.

After the devastation caused by floods, Ishaq suffered a heart attack and his left shoulder and arm were paralysed due to which he is unable to take up any manual work.

Every year he grew twenty mounds of almonds, walnuts, and grapes in his orchard which is now buried under mud and he's unable to reclaim his land.

Another climate change victim, Masum Shah, hailing from district Ghizer (Darkot Valley), told Daily Pakistan a similar tale of misery and suffering caused by torrential rains. He has now moved to Gilgit city to resettle and earn a safer livelihood.

Previously he owned a woodwork factory and fruit orchards but all was lost in one night.

Once an owner of a factory, Shah now works at a sawmill in Gilgit. “Not so long ago, I owned a big house. My two brothers used to raise cattle and practice farming but due to floods we had to vacate our villages,” said Masum Shah.

He further said: “I spent my entire life savings to buy a house which was lost due to floods. With nothing left behind now, I have to live in a rented house and take various jobs as laborer.”

“Not just that there was plenty of ghee and milk available in our village and we never faced any financial hardship but here in Gilgit city we barely manage to meet our needs,” he added.

Ishaq Khan and Masum Shah are amongst thousands of those who are getting affected from extreme weather events. Besides Climate Change which is bound to affect everyone despite race, case and religion, science blames rich countries for all this misery and suffering of developing and underdeveloped countries due to extreme weather events as the rich states developed by using coal and other fossil fuels which not only increased global temperatures but also led to freak weather patterns.

Pakistan, however, is a low contributor to GHGs, but still getting most affected in the form of GLOFs, flash floods, landslides in the north; cyclones and sea level rise on the coast, and worst of all, it is making less marginalized communities to flee from their homes, leaving everything behind to save themselves and their loved ones from the wrath of nature.

Regarding climate-induced migration from Darkut valley, local authorities in GB claim that so far only 100 people have migrated from Darkut valley to other areas but according to locals the number is far too high.

Weather experts predict that due to climate change, it's possible that this year there will be more rain and the rainy season will be lengthier than last year.

Dr Babar Khan, Senior Manager, WWF-Pakistan, also stated that for a period under discussion occurrence of seasonal floods have increased. Changes have also been observed in the snow fall.

In the past snow fall seasons would start in November and end by December but now the season extends till March. Due to rise in temperature, snow has started melting and non-seasonal floods have started taking place.

When asked Ali Tauqeer Sheikh, CEO, LEAD Pakistan and Director Asia, Climate and Development Knowledge Network (CDKN), regarding climate-induced migration taking place in Pakistan, he said: “There are three types of migration patterns induced by changes in environmental patterns and climate change. One is temporary migration resulting due to cloud bursts, flash floods or ordinary floods caused by torrential rains. The migrants move out with a hope to return back their homeland to lead a normal life.

“Second type is because of sea intrusion and in this case you lose your lands to the sea permanently as the sea water encroaches the coastline.

“Third type of climate-induced migration is caused by GLOFs whereby the communities getting affected move back and forth like nomadic people living under climate insecurities. This pattern is little understood, poorly documented and extremely risky from the communities perspective as well from the livelihoods, livestock and cultural heritage perspective.”

Ali Tauqeer added that a large number of GLOFs existed in Gilgit-Baltistan and thorough planning was urgently required to mitigate the risks.

On the other side, the Government of Gilgit-Baltistan admits that due to changes in global climatic conditions, the northern areas of Pakistan are getting affected in re-occurrence of unexpected snowfall and floods.