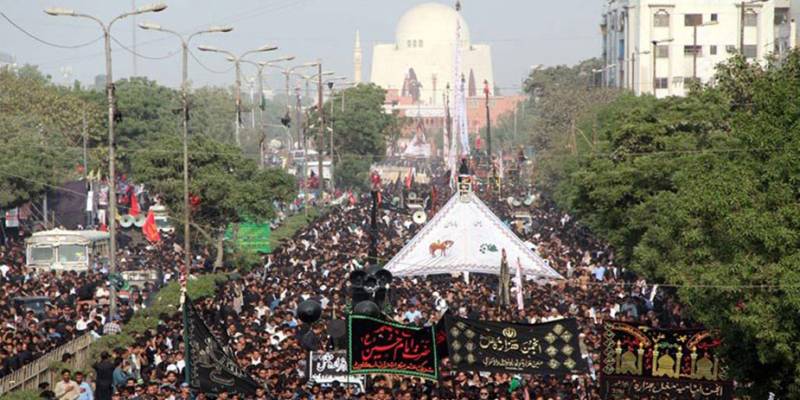 LAHORE – The Chehlum of Hazrat Imam Hussain and other martyrs of the Karbala tragedy is being observed today with religious spirit‚ devotion and respect across the country.

Strict security arrangements were made on the occasion to avoid any untoward incident.

More than 10,000 policemen would perform security duties on Chehlum of Hazrat Imam Hussain (RA) in the provincial capital.

The cellular services at the major route of the Chehlum would remain suspended due to security reasons.

Routes of processions would be monitored through cameras of the Punjab Safe City Authority (PSCA), adding that linked roads and streets would be sealed and barriers and barbed wires would be installed.

In Lahore, the major Chehlum gathering would conclude at Karbala Gamay Shah where hundreds and thousands of faithful would father to pay homage to great Imam Hussain (AS) and other martyrs of Karbala.

Police said that mourners would be allowed to enter in procession after checking from three points, adding walk-through gates, metal detectors and electric barriers would also be installed for checking.

The authorities also banned pillion riding in Karachi and other cities of Sindh on the occasion of Chehlum and ordered the citizens to strictly follow Standard Operating Procedures (SOPs) to control spread spread of Covid-19.

Meanwhile in twin cities, educational institutions and bazaars located on the route of the mourning procession of the Chehlum of Hazrat Imam Hussain remain closed on Thursday.

According to notification of Deputy Commissioner Rawalpindi Capt Anwar ul Haq, the district administration have finalised security arrangements for the peaceful observance of Chehlum.

Under the security arrangements, no one would be allowed to stand on rooftops of commercial and residential buildings situated along the procession routes.

On the other hand, Rawalpindi police has deployed 2300 armed policemen for the Chehlum to ensure security and to protect the mourners.