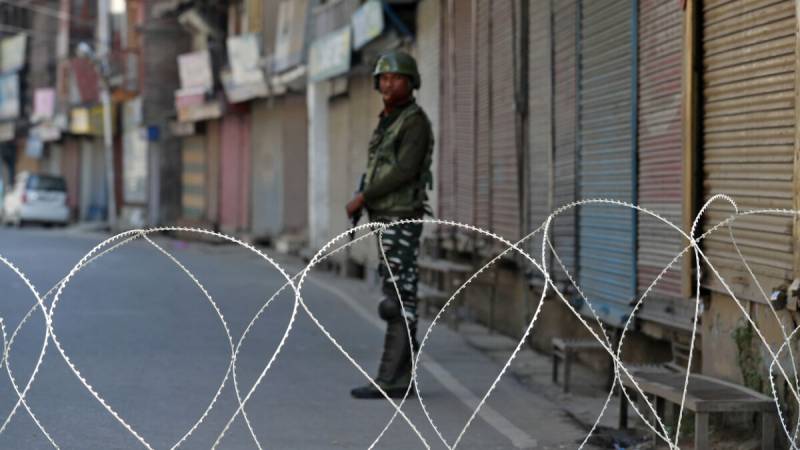 Ambassador Akram spoke in the General Assembly's Third Committee on 'Right of Self-determination' and in the Sixth Committees on 'Measures to Eliminate International Terrorism', and he warned the world community that the unresolved Kashmir dispute posed a threat to the peace and stability in South Asia.

Indian delegates at both the committees reacted to Ambassador Akram's pointed words, reading almost identical texts in which they claimed that Kashmir was an "integral and inalienable" part of India and accused Pakistan disturbing peace in the region.

Exercising his right of reply, Pakistan's delegate Zulqarnain Chheena said that his country will always support the just Kashmiri struggle for self-determination until Kashmiris won their freedom from Indian occupation.

As regards India, he said it has become a fascist state. "The supremacist ideology, Islamophobia and bigotry have always remained in the DNA of the Indian state. The RSS, after all is the longest-running continuous fascist movement in the world...

"Through patently discriminatory and bigoted citizenship laws, the BJP-RSS regime has now codified the choice between extermination or total submission for India's minorities.

"Despite mounting international condemnation on widespread and endemic human rights abuse, perpetrated by the Indian government against its own people, and against the occupied people of Jammu and Kashmir, the fascist BJP-RSS regime continues to sell hate to gain political mileage."

Chheena added, "No amount of brute force, including arbitrary arrests and detentions, torture and extra-judicial killings in staged encounters can ever take away the desire for freedom from the oppressed people of Jammu and Kashmir.

"Since India has no defence for atrocities committed by its occupying forces in illegally occupied Jammu and Kashmir, it tries in vain, to malign Pakistan. But we are not deterred by it."

On the other side, Pakistani delegate to the Sixth Committee Jehanzeb Khan squared off, calling India "the largest and most pervasive purveyor of terrorism."

"It (India) has used terrorism as an instrument of its coercive policies against every one of its neighbors, especially Pakistan and against its own Muslim population particularly in Indian Occupied Jammu and Kashmir."

No amount of extra-judicial killings in fake encounters, he said, can ever take away the desire for freedom from the oppressed people of Kashmir. The Indian hoax of targeting so-called terrorists was exposed only recently when the victims of Indian state terrorism, turned out to be innocent labourers.

India, Jehanzeb Khan said, was pushing the TTP & JUA, both of which are affiliated with ISIS/Daesh and ISIL-Khorasan and designated by the 1267 Sanctions Committee, in the cross-border terrorist attacks against Pakistani military and civilian targets, as thousands of Pakistanis have been killed or injured.

India was also financing and organizing secret mercenary terrorist organizations based outside our borders to conduct attacks in Pakistan to impede the implementation of the CPEC.

Jehanzeb Khan said Modi, a lifelong RSS member, was responsible for the pogrom in Gujrat in 2002 which killed 2000 innocent Muslim children, women and men -- and repeated this year in Delhi. Mr. Modi was denied a visa to the US until he became Prime Minister. "There are court cases in the US still pending against Modi and his associates.

"Sooner or later, these terrorists will be brought to justice. Pakistan will continue to unmask Indian terrorist activities in front of the world," he added.