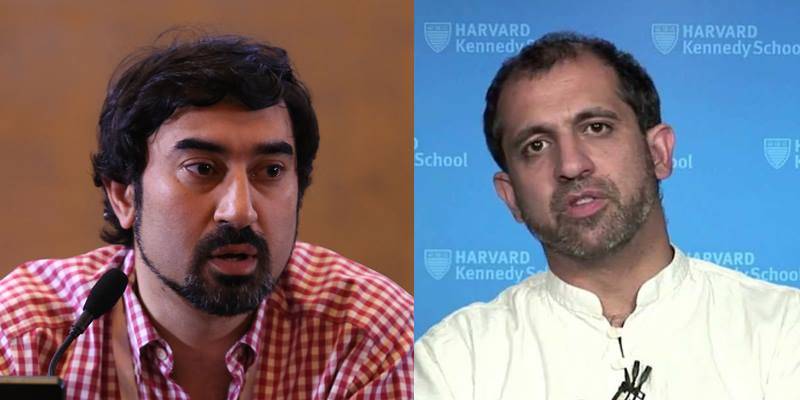 ISLAMABAD - In a bid to register protest against the expulsion of Dr Atif Mian from the Economic Advisory Council (EAC), two renowned economists have resigned from the body.

Dr Asim Ijaz Khwaja announced his decision on the popular microblogging site Twitter shortly after the government asked Dr Atif Mian to step down from his position on Friday, saying 'being a Muslim I can’t justify this'.

Have resigned from EAC. Painful, deeply sad decision. Grateful for chance to aid analytical reasoning but not when such values compromised. Personally as a Muslim I can't justify this. May Allah forgive/guide me&us all.Ever ready to help.Pakistan Paindabadhttps://t.co/j80LHEhfRK

“Have resigned from EAC. Painful, deeply sad decision. Grateful for chance to aid analytical reasoning but not when such values compromised,” Dr Khwaja wrote on his official Twitter handle.

Another economist, Imran Rasul also took to Twitter Saturday morning and announced 'with a heavy heart' that he was resigning from the economic panel, citing the treatment meted out to Atif Mian.

With a heavy heart, I have resigned from the EAC this morning. The circumstances in which Atif was asked to step down are ones I profoundly disagree with. Basing decisions on religious affiliation goes against my principles, or the values I am trying to teach my children. (1/5)

In a series of tweets, Rasul expressed that if there was a single economist, Pakistan needed for the uplift of its economy, it was Atif Mian.

Truth be told, if there was one academic on the EAC that Pakistan needs, it was @AtifRMian. Resolving the macro and fiscal mess the country is in will lay the bedrock for social protection, poverty alleviation policies and other economic reforms the country also needs. (3/5)

Rasul, who serves as a professor of Economics at the University College of London, shared that Pakistan was full of talent and only a leader willing to cash in on it was needed.

He, however, expressed willingness to offer non-partisan advice to help improve economic policymaking.

I wish the government and EAC luck in their future work, and remain willing to offer non-partisan, evidence based advice that can help improve economic policy making in the country. (5/5)

The string of resignations has brought down the number of EAC members to 15 from the initially installed 18 members.

The inclusion and expulsion of Atif Mian in the Economic Advisory Council have opened floodgates of criticism for Pakistan Tehreek-e-Insaf as the economist is a member declared a minority group in Pakistan.

ISLAMABAD - Following the backlash over appointing a member of the Ahmadi faith in Economic Advisory Council, the ...

Earlier, Information Minister Fawad Chaudhry defended his inclusion by saying that he was poised to clinch the Nobel Prize in few years, however, on Friday the government finally announced that it was withdrawing the name of the Princeton University professor clearly due to the pressure from the religious circles.

The appointment of Mian to the advisory group went controversial after different groups, including Tehreek-i-Labbaik Pakistan (TLP), raised concerns over including an Ahmadi in the council.

The removal of Mian came three after PTI government vowed not to bend to fundamentalists, saying minorities have same rights in Pakistan as the majority enjoys.

Information Minister Fawad Chaudhry, on Sept 4, responding to the criticism, said that the minority member has been appointed in the advisory council related to the economy and not in the Islamic ideology council.