Nawaz Sharif wishes to retain Khaqan Abbasi as PM till 2018 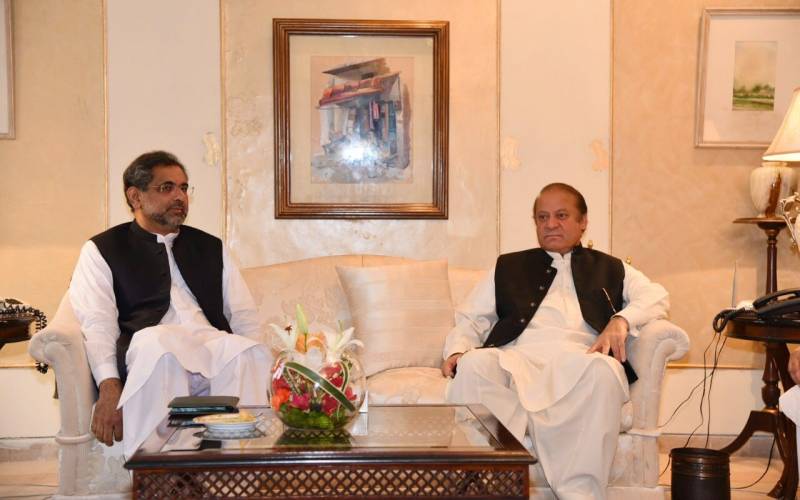 ISLAMABAD - Former prime minister Nawaz Sharif expressed on Wednesday that he wished that Khaqan Abbasi would retain his post till the next general elections in 2018.

“It is my wish that Shahid Khaqan Abbasi remains prime minister until the end of the current stint of PML-N,” Nawaz Sharif said in his brief remarks before departing for his GT Road rally.

Sharif, who was disqualified by a five-member bench of the Supreme Court on July 28 posed full confidence in Khaqan Abbasi that he will complete the projects started by him (Nawaz Sharif).

The former premier also lavished praise on his younger brother Shahbaz Sharif who is currently serving as chief minister Punjab saying that he was the pride of Pakistan and the province.

"Shahbaz Sharif's work in the province has become a role model for others," Nawaz Sharif claimed.

Regarding his GT Road power show, Sharif was of the view that he was taking to the streets in a bid to express gratitude to the masses for their support to him and his party.

It is relevant to mention that the ruling party had announced their decision to select Khaqan Abbasi as a stop-gap premier of the country after the disqualification of Nawaz Sharif for concealing his employment with Capital FZE, a firm owned by his son Hassan Nawaz.

As per the plans, Abbasi had to retain the post roughly for 45 days till Shahbaz Sharif wins elections in NA-120, a seat vacated by his elder brother.

However, Nawaz Sharif's wish for Abbasi indirectly implies that his brother might not make it to the PM House and any other member of the ruling party might contest elections against Yasmin Rashid of Pakistan Tehreek-i-Insaf.

The Election Commission of Pakistan has set September 17 for the elections but there are still few days left for candidates to submit their papers.

Shahbaz Sharif has not yet submitted his papers and it is highly likely that he would continue serving as administrative head of Pakistan's most populous province with any other leader of the party throwing a gauntlet to rivals in bye-elections.

Hours after the former premier Nawaz Sharif started his journey towards Lahore, Shehbaz Sharif said on Twitter that it is the people's trust that inspires Nawaz, and prayed to God to keep all of the rally's participants safe.

It is people's trust that inspires Nawaz Sharif.. May Allah keep my brother, my leader & all the participants of rally in His protection -ss

He added that public engagement is a fundamental right of every political party.