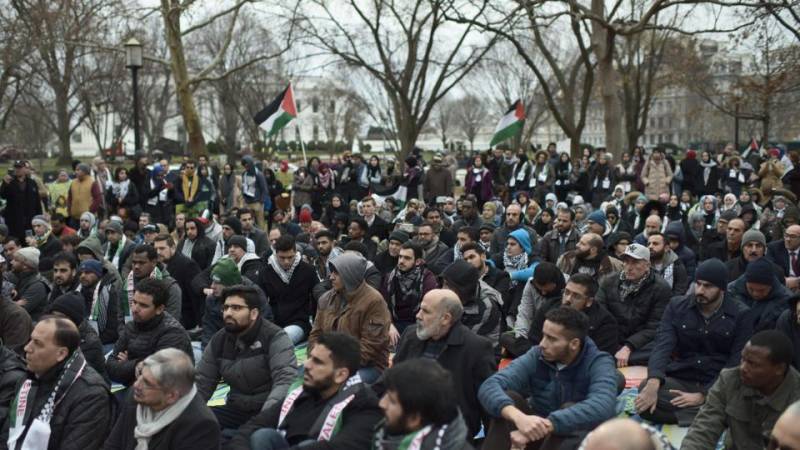 WASHINGTON - Scores of Muslims assembled outside the White House in Washington to attend Friday prayers as a protest against President Donald Trump's decision to recognize Jerusalem as the capital of Israel.

Multiple American Muslim organizations had given a call for a protest following which the believers rolled out their prayer mats at a park in front of the president's official residence.

The Muslims, who were dismayed by the tycoon-turned-president's decision regarding Jerusalem, wore traditional Palestinian keffiyeh scarves or the colors of the Palestinian flag and held placards denouncing Israeli occupation of East Jerusalem and the West Bank.

Besides the White House protest, Muslims in other parts of the world including Pakistan took to the streets on Friday decrying Trump's  recognition of Jerusalem as the capital of Israel and relocation of the US embassy from Tel Aviv to Jerusalem.

Nihad Awad, executive director of the Council on American-Islamic Relations who was present outside the White House, censured the American president affirming that Trump owned only the tower named after him, instead of Jerusalem or Palestine.

He stressed Trump to put the American interests first, not those of a foreign power and its lobbies in the US.

On Friday, clashes between thousands of Palestinians and Israeli security forces in the West Bank and on the Gaza Strip left two people dead and dozens injured.

Israel’s military said its aircraft bombed militant targets in Gaza and the Palestinian Health Ministry said at least 25 people including six children were wounded in the strikes.

The Israeli military alleged that they retaliated to rockets fired earlier from Gaza at Israeli towns.

Palestinian president over US arbitration

Palestinian President Mahmoud Abbas said on Friday that the United States could not broker the Israeli-Palestinian peace process.

'We reject the American decision over Jerusalem.With this position the United States has become no longer qualified to sponsor the peace process,” Abbas said in a statement.