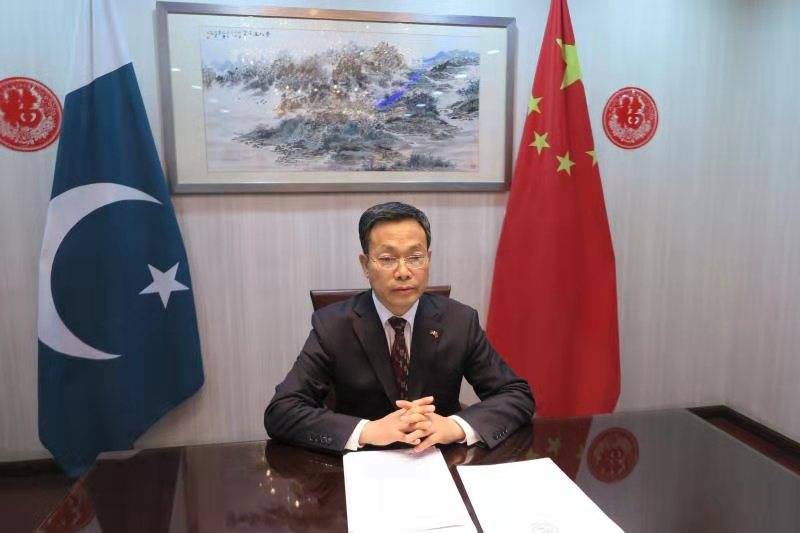 China is taking up the challenge to offset the severity of the novel Coronavirus outbreak in one fell swoop mostly in China as well as around the globe. In this difficult time, China took the difficult decision to lock down the province of Hubei to save the country and the rest of the world from the spread of virus. Yasir Habib Khan, China Today’s special correspondent in Pakistan interviewed Chinese Consul General in Lahore Long Dingbin. Consul General Long appreciated Pakistan’s congenial support and unshaken solidarity at the time when China direly needed it.

Yasir Habib Khan: How is the Chinese government coping with the virus outbreak and its impact?

Long Dingbin: Acting with a high sense of responsibility towards the people's health, the Chinese government has taken the most comprehensive and strict prevention and control measures after the outbreak of the epidemic, many of which have far exceeded what International Health Regulations (IHR) required. President Xi Jinping has attached great importance and given several important instructions. The CPC Central Committee has set up a leading group for comprehensive prevention and control of the epidemic. The Chinese Government and people are making every effort to combat the epidemic. The central and local governments have built an all-round and multi-level prevention and control system, especially focusing on the city of Wuhan and Hubei Province. We are advancing the battle in an open, transparent, scientific, and orderly manner.

The State Council of China has established a unified national dispatch system for epidemic prevention and control materials to timely coordinate the dispatch of medical personnel, medical supplies, and daily necessities.

As the WHO Director-General Tedros Adhanom Ghebreyesus noted, China is setting a new standard for outbreak response. In the same speech, he said specifically that declaring a public health emergency of international concern is not a vote of no confidence on China. On the contrary, WHO continues to have confidence in China's capacity to control the outbreak.

Yasir Habib Khan: Do you see any impact of the novel coronavirus on Pak-China bilateral Trade?

Long Dingbin: The second phase of the Free Trade Agreement (FTA) that took off from January 1, 2020 is expected to open new vistas of trade between the two countries. I do not see Pak-China trade getting bedeviled given the grim situation. Business to business environment can never be hurt as usually it is executed online or through telephonic and other modes of communication. The real challenge is to mitigate people to people contact that is very favorable for the spread of contagious disease. So it is highly recommended temporarily for people to minimize contact and gatherings to prevent further spread of the virus.

Long Dingbin: Pakistani students and citizens living in Wuhan are free to move within their university campuses as all essentials of life are found within the boundaries of their universities. The recommended 14-day quarantine period is over and no symptom has been detected, and they may fly back to their homeland as per their own choice abiding by prescribed health regulations laid down in collaboration with the World Health Organization (WHO), global institutions, and Chinese health authorities.

There is no travel embargo. Recently, flights from China to Pakistan brought many Pakistani students back to Pakistan. These Pakistanis had to undergo intense medical observations under quarantine and proper screening procedures. Having been certified as unaffected, they departed easily.

In my opinion, and as per WHO recommendations, Pakistani students and all other nationalities in Wuhan and other cities should stay at their homes and defer their travel plans for the time being. The situation is going to change as China is about to defeat the novel coronavirus epidemic with full might.

Yasir Habib Khan: On the onslaught of the novel coronavirus, are CPEC projects being suspended fully or partially, particularly in Punjab?

Long Dingbin: The suspension of CPEC projects is rumor. All projects, including those in the Punjab are running smoothly and under normal construction. Due to the Chinese Spring Festival holiday, discontinuation occurred for three days from January 24 to January 26. On January 27, all work resumed accordingly.

The Sahiwal coal-fired power plant and the Bahawalpur Solar Park were completed several years ago, and are currently in normal operation. The Lahore Orange Line project and the Matiari to Lahore HVDC transmission line project are currently under normal construction and have not been affected by the epidemic prevention measures. We noticed that Nikkei Asian Review reported that CPEC projects were postponed. This is not true.

As for all the Chinese staff that returned from China to Pakistan after availing their holidays, all had authentic clearance certificates from Chinese Health Authorities before resuming their work as per routine on CPEC projects. As a precautionary measure, Chinese nationals are still under observation and they are medically checked daily.

Yasir Habib Khan: How is the Chinese government helping out foreigners in China?

Long Dingbin: The Chinese government attaches high importance to the well-being of foreign nationals in China, especially those in Wuhan, Hubei. China has taken effective measures to address their concerns and needs in a timely manner.

Hubei provincial government has set up a 24-hour hotline (027-87122256) for foreign citizens, students, and tour groups in the province to access advice and assistance. In addition, the official website and the WeChat account of Hubei Foreign Affairs Office promptly relayed information and updates on the situation of the epidemic and prevention knowledge in English, French, German, Russian, Japanese, Korean, and Spanish. Many provinces, autonomous regions, and municipalities, including Beijing, Shanghai, Tianjin, Guangdong, Jiangsu, and Xinjiang have sent open letters to foreign citizens working and living there, sharing with them information channels and designated treatment centers and offering services in light of local realities.

The Ministry of Foreign Affairs has set up a special column entitled "Fighting 2019-nCoV" on its website, gathering the latest information to keep foreign readers updated.

To help equip foreign nationals in China with prevention know-how, the National Immigration Administration translated the Public Prevention of Pneumonia Caused by Novel Coronavirus released by the Chinese Center for Disease Control and Prevention into six foreign languages, namely English, French, Russian, German, Japanese, and Korean. They are all readily available online.

All the measures China has taken have gone above and beyond WHO recommendations and International Health Regulations. We are doing our best to contain the spread of the coronavirus within the shortest time possible. We have the confidence and the ability to win this battle. There is no need for any panic from foreign friends in China. As Director-General WHO Dr. Tedros put it: This is the time for facts, not fear. This is the time for science, not rumors. This is the time for solidarity, not stigma. China will continue to enhance cooperation with the international community in an open, transparent, and highly responsible manner to safeguard the life and health of Chinese people and foreign nationals in China.

Yasir Habib Khan: There is a perception that Pakistan hospitals are not equipped with the adequate health care facilities to fight against virus, so under the situation, have the Chinese and Pakistani governments drawn up any contingency plan?

Long Dingbin : China is willing to work together with Pakistan to diagnose and prevent this epidemic to the best of its ability. The two governments have maintained close communication on this. At present, China has provided 1,000 test kits to Pakistan, and arrangements have been made in Services Hospital Lahore to deal with the coronavirus cases with the required medical facilities.

Yasir Habib Khan: What is the flight situation between Pakistan and China?

Long Dingbin: On February 3, Pakistan resumed flights between Pakistan and China. China and Pakistan are iron brothers that share a good tradition of mutual assistance. As China fights the outbreak, Pakistan has stood firmly with us, maintaining flights and pooling medical supplies all over the country to help China. We are deeply grateful and touched by such trust and confidence. China will continue to work in close communication and coordination with Pakistan to safeguard the health of Pakistanis in China.

This interview is originally appeared on China Today