Radicalization and fanaticism of the educated 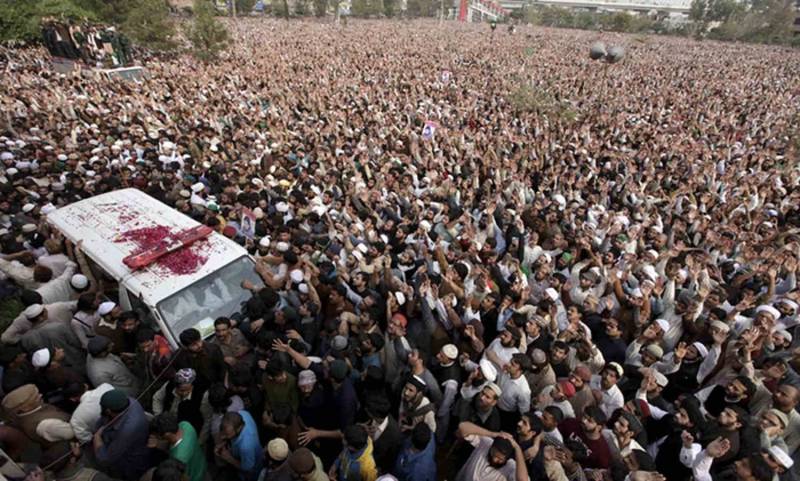 It seems a volcano has erupted, at least in the social media, after the hanging of Mumtaz Qadri for the murder of Punjab Governor Salman Taseer. As usual the nation is divided among those that consider Qadri a ghazi for protecting the sacred reputation of the Prophet (PBUH) while on the other side are those that believe upholding rule of law is critical for the viability of the state. They argue that Qadri accepted that he committed the crime, was apprehended at the scene of the crime and was never apologetic about taking law in his own hands. His supporters on the other hand say that trial was conducted in a haste that he acted out of rage and because of that instead of being hanged he should have been dealt with a lesser punishment.

The debate on the social media is dominated by a narrative that is more political than religious. The arguments there suggest that Qadri a common citizen who killed an arrogant governor of the largest province. He was punished severely because he acted against elite of the country. He would have not faced hanging if he had killed a poor citizen and was rich enough to pay the blood money. In other words that judiciary and the system favors elite of the country by saving them from severe punishments while a common citizen face the wrath of it. In this narrative there is no religious issue but since religion raises emotions as well as provide legitimacy it is used effectively to bring people on the streets to pressure the government.

Religious political parties have a unique connection with Pakistan and its political evolution. During the time of struggle for independence they opposed creation of Pakistan using one or the other pretext. But once it was created they wanted to control its destiny to convert it into a deeply orthodox religious country. They created substantial hurdles in the drafting of the first constitution and were not satisfied until the objectives resolution was made part of the first constitution promulgated in 1956 which remained part of the current constitution of 1973 as article 2(A). But that was not enough to satisfy the religious establishment and they continue pushing for more amendments to curtail the citizenship rights of non-Muslims.

Religious parties and institutions operate almost like a parallel state without any regard for regulations, control on their funding, and monitoring of qualification of their leaders and teachers. They maintain daily contact with the masses through five prayers as well as sermons during Jumma. Government has no control or say in the jumma sermon that is full of emotions to play on psyche of the people, misquoting of Islamic history and promotion of fear of punishment if anyone deviated from the faith defined by them. In the opinion of most of these Imam’s at the mosque, even in large cities, asking probing questions about the message of the religion is a sign of lack of faith and in extreme cases the person can be labelled an apostate. But in my view they discourage probing questions because that would expose their lack of knowledge of the faith. Because of this culture I was not surprised to see that a lot of highly educated people came out in defense of Mumtaz Qadri because radicalization and fanaticism has penetrated our cities through mosques controlled by poorly educated orthodox Imams.

There are three main power centers in Pakistan. Political parties providing avenue for landed and industrial classes while military and religious establishment create elites from middle classes. In most cases these three power centers accommodate each other. There has never been a time in the political history of Pakistan when religious parties were not accommodated in one way or the other by the government. In last 15 years they controlled the provincial government in Khyber Pakhtoonkhwa; were allies in Balochistan and central government.

On their own the religious parties were never able to emerge as a majority and here in lies their frustration. Religious political parties have never raised voice about issues of the people whether it is corruption or injustices. In a way they have allowed the frustrations of the people to grow. Why? May be because they feel that weakening of the state could allow them an opportunity to increase the share of their pie or in extreme situation get control of the government through other means. They may be closely watching the methods and techniques used by Islamic State in Syria and Afghan Taliban. We must not forget that most religious parties have militant wings and encourage their cadre to own weapons. Imagine this organized but dormant force being unleashed on population when the state breaks down or weakens because of the social unrest caused by long history of corruption and injustices of the elite.

What is the solution? There is no easy or short term solution. Management and containment of chaos in the immediate term is important. In the long term we have to reform our political parties to provide able leaders to emerge. We have to also define the role of religion in politics as well as regulate religious establishment. Speedy, affordable and uniform justice is critical for long term viability of our country. The concept of qisas and diyat has been abused by the rich to get away with murder this has to stop immediately. There have been reports that families of the victim were forced to accept a compensation using threat of consequences if they refused. Similarly no political elite has been punished for rampant large scale corruption and if someone says there is no corruption in Pakistan then it is a blatant lie. This is unsustainable and has to change on immediate basis.

After reading the comments on social media in last two days, to me it seems, we have to be prepared for a generational struggle. We are a deeply divided society on many lines and ideologies. Bringing all of us together to agree on a new social contract and a plan will be critical political work. It will require a dedicated team with vision, resolve and persistence to pull this nation together. But this team has to earn the mandate of the people rather than emerge on the shoulders of a general.