'Free Kashmir' poster waved during a protest at Delhi University 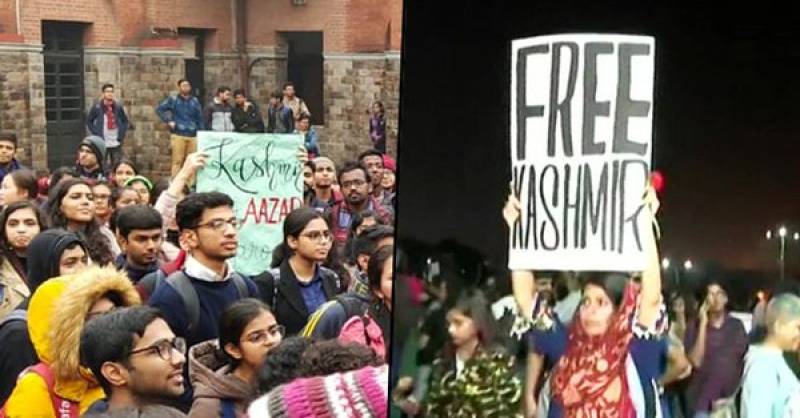 ISLAMABAD – A ‘Free Kashmir’ poster was waved during a protest in Delhi University against the violent attack on students of Jawaharlal Nehru University (JNU) in the Indian capital.

According to Kashmir Media Service, the students of St Stephens College of Delhi University boycotted their classes and took part in the massive protest to show their solidarity to the JNU students. As pictures of the protest surfaced, a student was seen holding a “Kashmir Aazad” poster. The students also chanted Azaadi (freedom) slogans, Kashmir Media Service reported.

Earlier, in a protest in Mumbai against the violence on the JNU students, a woman was spotted holding a ‘Free Kashmir’ placard.

After the incident, the Mumbai Police filed an FIR against the woman identified as Mahek Mirza Prabhu. The FIR was filed at the Colaba police station.

On Sunday evening, JNU students were attacked by masked goons affiliated with Akhil Bhartiya Vidyarthi Parishad, a right-wing all India student organisation affiliated to the extremist Hindu organization, Rashtriya Swayamsevak Sangh. As many as said 50-odd goons entered the campus and went on a rampage, attacking people and vandalising cars.

MUMBAI - Several Bollywood celebrities have been heavily criticised by the media over maintaining silence over the ...