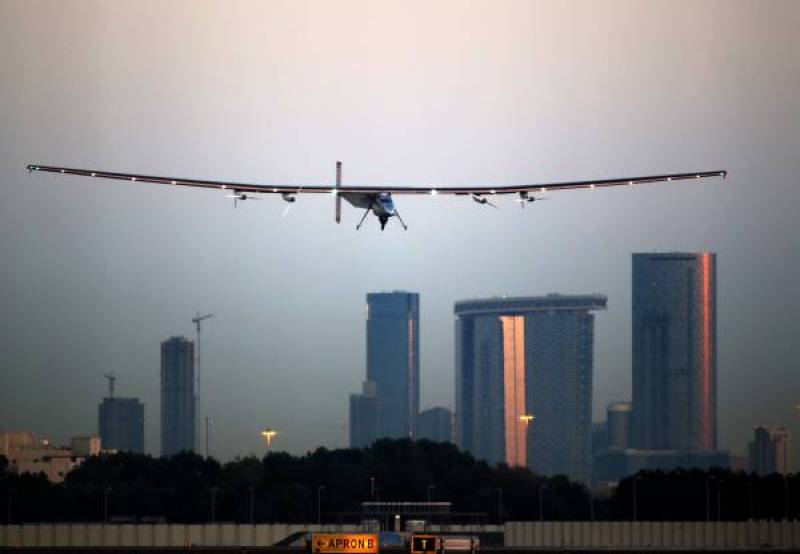 ABU DHABI (APP) - The first attempt to fly around the world in a plane using only solar power launched Monday in Abu Dhabi in a landmark journey aimed at promoting green energy.

The Solar Impulse 2, piloted by Andre Borschberg of Switzerland, took off at 7:12 am (0412 GMT) from Al-Bateen airport and headed to Muscat, the capital of Oman, where it is expected to land later Monday after the first leg of the journey.

The takeoff, which was originally scheduled for Saturday but delayed due to high winds, capped 13 years of research and testing by Borschberg and and fellow Swiss pilot Bertrand Piccard.

"This project is a human project, it is a human challenge," Borschberg, co-founder and chief executive of Solar Impulse, told reporters on Sunday.

The wingspan of the one-seater plane, known as the Si2, is slightly bigger than that of a jumbo jet, but its weight is around that of a family car.

From Muscat, it will make 12 stops on an epic journey spread over five months, with a total flight time of around 25 days.

It will cross the Arabian Sea to India before heading on to Myanmar, China, Hawaii and New York.

Landings are also earmarked for the midwestern United States and either southern Europe or North Africa, depending on weather conditions.

The longest single leg will see a lone pilot fly non-stop for five days across the Pacific Ocean between Nanjing, China and Hawaii, a distance of 8,500 kilometres (5,270 miles).

Borschberg and Piccard will alternate stints flying the plane, which can hold only one person, with the aircraft able to fly on autopilot during rest breaks.

The pilots have undergone intensive training in preparation for the trip, including in yoga and self-hypnosis, allowing them to sleep for periods as short as 20 minutes but awaken feeling refreshed.

All this will happen without burning a drop of fuel.

The pilots will be linked to a control centre in Monaco where 65 weathermen, air traffic controllers and engineers will be stationed. A team of 65 support staff will travel with the two pilots.

Should a problem occur while sleeping, the ground staff can wake up the pilot.

"We want to share our vision of a clean future," said Piccard, chairman of Solar Impulse, said of the mission.

"Climate change is a fantastic opportunity to bring in the market new green technologies that save energy, save natural resources of our planet, make profit, create jobs, and sustain growth."

The pilots' idea was ridiculed by the aviation industry when it was first unveiled.

But Piccard, who hails from a family of scientist-adventurers and who in 1999 became the first person to circumnavigate the globe in a hot air balloon, clung to his belief that clean technology and renewable energy "can achieve the impossible".