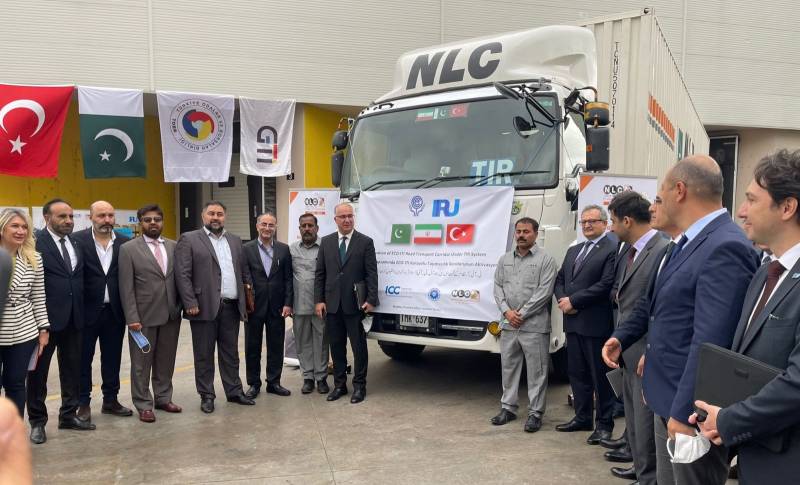 A ceremony was held on Friday at Murat Bey Customs Post in Istanbul to mark the launch of the tri-nation road corridor.

The NLC trucks departed from Karachi on September 28 and reached Istanbul on October 7 covering a distance of 5300 Kilometers, said an official statement.

Senior officials of the Turkish Ministry of Transport and Infrastructure, Ministry of Trade, Chamber of Commerce & Commodity Exchanges of Turkey (TOBB), International Road Transport Union (IRU), ECO Secretariat, Transport Ministry of the Islamic Republic of Iran, NLC, members and representatives of the Turkish private sector related to transport, and Pakistan Ambassador to Turkey, Muhammad Syrus Qazi accompanied by representatives of Pakistan Embassy and Consulate General participated in the ceremony.

Umberto de Pretto, Secretary General of IRU, based in Geneva, also came to attend this ceremony. All participants hailed the development as a vital step in promoting connectivity and enhancing trade between Pakistan and Turkey.

Ambassador Syrys Qazi in his remarks highlighted the Pakistan's focus on geo-economics and how regional connectivity was crucial in this regard.

He hailed this trial run of NLC trucks as a historic step that will strengthen road connectivity between Pakistan and Turkey and would also help in promotion of bilateral trade.

The ambassador noted that operationalization of this road link will help reduce the cost and time for transportation.

Reviving the Islamabad-Tehran-Istanbul (ITI-ECO) road transport corridor will generate revenue, boost trade and increase economic cooperation among the ECO member states. After this initial successful run, the NLC intends to increase and regularise transport of goods between Pakistan and Turkey, helping to bring the two countries further closer.

WASHINGTON – The World Bank (WB) has lowered Pakistan’s GDP growth prospects to 3.4% for the current fiscal ...