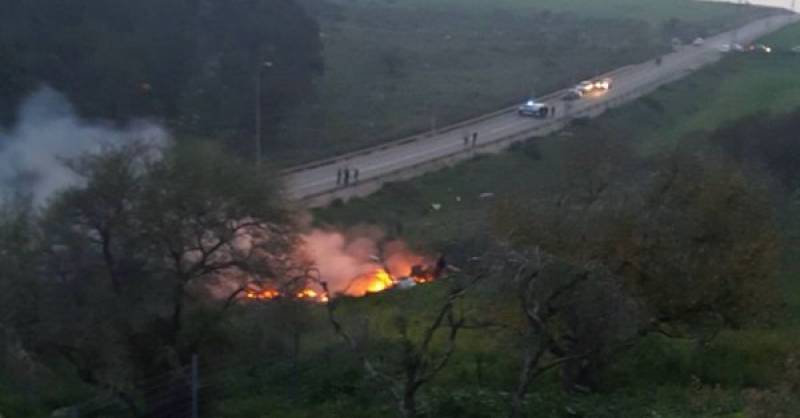 DAMASCUS - The Israeli military shot down an Iranian Unmanned Aerial Vehicle (UAV) early Saturday before launching a “large-scale attack” on at least a dozen Iranian and Syrian targets in Syria.

Israel called it a “severe and irregular violation of Israeli sovereignty” and warned of further action against the unprecedented Iranian aggression, the Haaretz reported.

The military said its planes faced massive anti-aircraft fire from Syria that forced two pilots to abandon an F-16 jet that crashed in northern Israel. One pilot was seriously wounded and the other lightly. Syrian officials reported large explosions in the center of the country and the Syrian counter fire set off warning sirens throughout northern Israel.

DAMASCUS – The Syrian army’s air defense on Saturday shot down an Israeli F-16 fighter after confronting a ...

The Israeli strikes marked its most significant engagement since the fighting in neighbouring Syria began in 2011 and said Iran would be held responsible for its outcome.

Gen. Hossein Salami, acting commander of Iran’s Revolutionary Guard, did not acknowledge Israel’s claim it shot down the drone. “We do not confirm any such news from Israel,” he said.

#Israel releases video of #Iran(Ian) drone which crossed into Israel and was downed by an Apache attack helicopter near Beit She’an pic.twitter.com/McX4ltwFlf

But the joint operations room for the Syrian military and its allies denied the drone violated Israeli airspace, saying it was on a regular mission gathering intelligence on Islamic State militants.