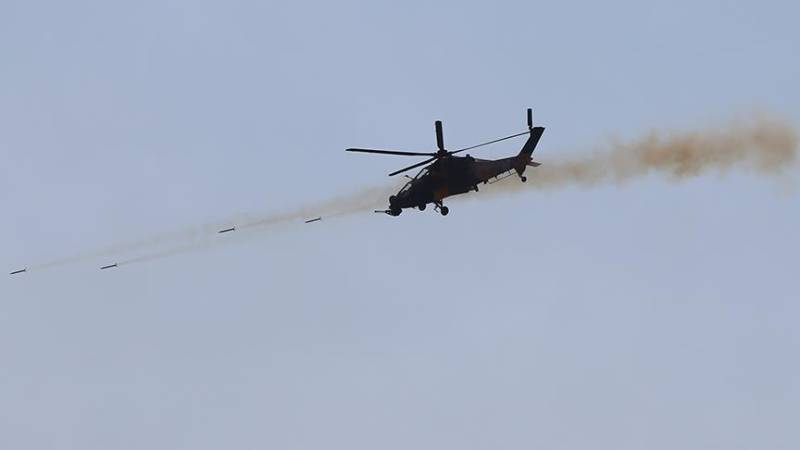 ANKARA - A Turkish military helicopter was shot down during Ankara's military offensive against Kurdish troops in northern Syria, the state-run Anadolu news agency reported on Saturday.

The helicopter is reported to have crashed in the Turkish Hatay Province on the border with Syria’s Afrin region where Ankara is conducting Operation Olive Branch against Kurdish forces.

The moment a Turkish helicopter is shot down by Kurdish forces defending #Afrin. #Turkey #TwitterKurds

President Recep Tayyip Erdogan confirmed the downing of the helicopter, according to Turkish media. "A little earlier, one of our helicopters was shot down," he told reporters, adding that those who are responsible for the incident would pay a "heavier price."

The president, however, did not specify who was responsible for the attack.

The Operation Olive Branch in the Afrin region in northern Syria entered its fourth week on Saturday. The campaign followed Ankara’s promises to “strangle” the new Border Security Force (BSF) in Syria.

Earlier in January, the US-led coalition announced that it would help create the 30,000-strong BSF, half of which would be made up of the Kurdish Syrian Democratic Forces (SDF) alliance.

Ankara was angered by the fact that the main force behind the SDF is the Kurdish People’s Protection units (YPG), linked to the Kurdistan Workers’ Party (PKK). The latter is designated as a terrorist group by Turkey.

The operation has been conducted jointly with Free Syrian Army opposition forces which are friendly to Turkey.

Damascus has firmly condemned the operation as an assault on Syria's sovereignty. Moscow, in turn, has urged all the parties to exercise restraint and called for respect for Syria's territorial integrity.