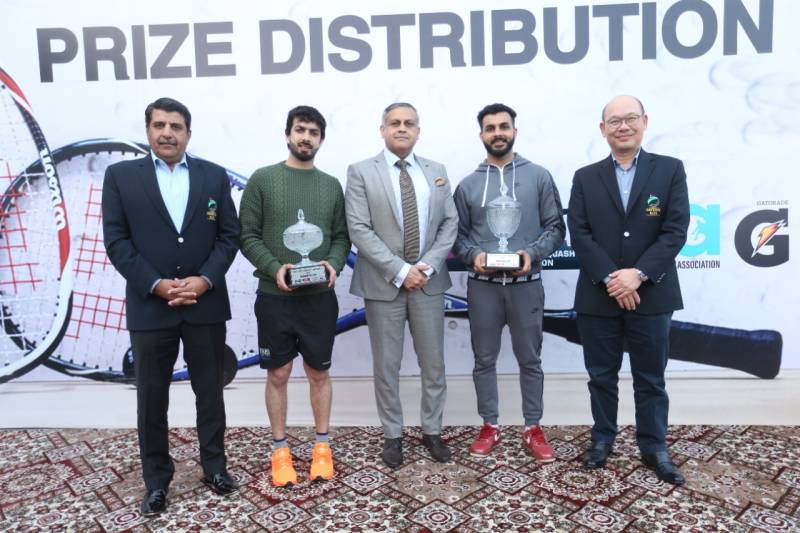 Tayyab, world-ranked 43, was up against Ahmed Amin, world number 300. Both the players started well and played superb squash against each other, matching fire-with-fire till it was 10-10. Tayyab then held his nerves and took the first game 12-10.

During the second game,  Ahmed made a convincing comeback and looked resolutely for an upset over the towering Tayyab. In the third game, the flow of the contest was sparkling and the squash fans and audience, which included the former world number two, Gogi Alauddin, appreciated every shot.

The third game tilted in favor of Tayyab after he hit a few elaborately timed drop shots and the third game score was 12-10 in Tayyab’s favour.

Tayyab was more fighting fit and the returns most of the time were high toned and upscale. Administrator DHA Brig Waheed Gul was there personally to watch the competitive activity and applauded every forceful shot. In the end, Tayyab once again held his nerves and took the fourth game 11-9 to win the title emphatically and with it some lucrative cash prizes.

The contest for third and fourth position was won by Uzair, who won the encounter 3-0 against Muhammad Farhan. Uzair won the encounter 11-9, 12-10, 12-10. A resplendent event organized superbly by the Defence Raya Sports Team and Punjab Squash Association (PSA).

At the conclusion of the championship, the prizes were awarded to the winners by Administrator DHA, Brig Waheed Gul Satti in the presence of CEO of Defence Raya, Kang Chong Jin, Gogi Alauddin and a large number of squash enthusiasts.