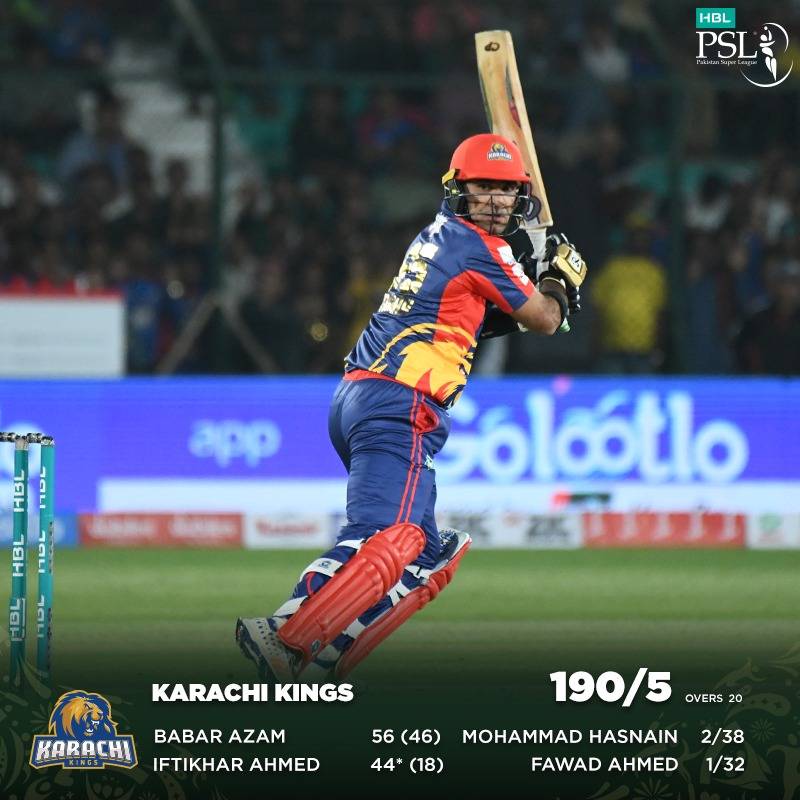 In front of a packed house at the National Stadium in Karachi, Ahmed Shezhad almost single-handedly dragged Quetta to a win with a sublime 99 but Shinwari picked up three wickets in a sensational final over to pull off a great escape for the Kings.

Chasing 191 for victory, Quetta got off to an excellent start with the bat with openers Ahmed Shehzad and Shane Watson adding 66 runs in the powerplay without any damage.

Three sixes 22 runs in an over, @iamAhmadshahzad keeps the chase alive. WHAT A KNOCK!
Quetta Gladiators require another 28 runs with 7 wickets and 18 balls remaining
LIVE: https://t.co/AvvNVO1kH6#HBLPSL #KhelDeewanoKa #KKvQG pic.twitter.com/PJlrYnLChJ

Umer Khan brought Karachi roaring back into the match with the young spinner adding Watson and Rilee Rossouw to the collection of illustrious batsmen he has dismissed in the tournament.

Shehzad and Umar Akmal were then starting to forge a promising stand with the former going on to register his third consecutive fifty for Quetta with a huge six off Sohail Khan. However, the brilliant Umer brought Karachi back into the game once again with the crucial wicket of Akmal (27) in his final over.

With 56 runs required off 30 deliveries, Shehzad turned the tide with three sixes off the 16th over bowled by Usman Shinwari. Despite Dwayne Bravo failing to score off four consecutive deliveries in the next over, Shehzad kept his nerve to take Quetta to the verge of a win before Usman Shinwari introduced another late twist in the tale.

With just four runs more needed for a Quetta win, Shinwari dismissed Shehzad on 99 before removing Anwar Ali with the next delivery. Sarfraz Ahmed was dismissed for a duck two deliveries later to bring down the equation to three required off the last ball.

Great finish from @KarachiKingsARY in the death overs. They scored 65 runs in the last five overs. Batting first in #HBLPSL history, they've scored more in the final phase on only two previous occasions. #KKvQG pic.twitter.com/6IWYiRYlhf

The Gladiators won the toss and opted to bowl first against the Kings who are eyeing a place in the play-offs of the 2019 Pakistan Super League (PSL).

Babar Azam remained the top scorer with 56 runs off 46 balls, while the top wicket taker from the Gladiators' side was Mohammad Hasnain who took the crucial wickets of Azam and Ingram.

Quetta Gladiators, Peshawar Zalmi and Islamabad United are already through to the playoffs.

After winning against Quetta today, Kings are now through to the playoffs and Lahore Qalandars are eliminated.

The first qualifier (one vs two) will be played on Wednesday followed by the eliminator (3 vs 4) on Thursday.

The second qualifier (loser of first qualifier vs winner of eliminator) will be played on Friday.

The final will be played on Sunday.