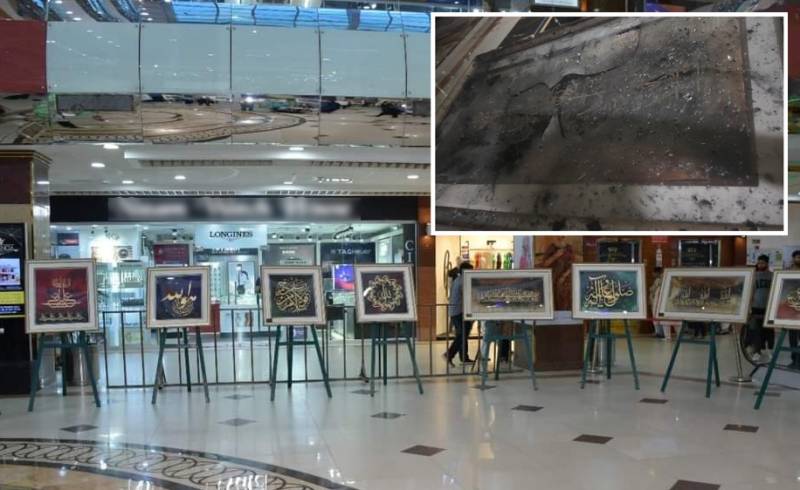 ISLAMABAD – Firefighters on Sunday brought under control a huge inferno that engulfed the country’s largest shopping mall in the federal capital.

However, several Islamic calligraphy artworks were destroyed in the fire.

It took calligrapher Wasil Shahid years to make artworks that were put on display at a three-day Islamic Calligraphy exhibition on the occasion of the birth anniversary of the Holy Prophet (peace be upon him).

Shahid, who belongs to Kot Radha Kishan, but currently lives in Islamabad, has studied at Numl, University of the Punjab and FCCU Lahore. Noted politicians Qamar Zaman Kaira and Ali Muhammad Khan visited the exhibition before the fire gutted many of the artworks.

In a social media post, the artist shared his pain as fire turned his hard work into ashes in a few minutes. He said the fire damaged at least 9 artworks out of 21.

A fire broke out at Islamabad's most visited shopping mall at around lunch time on Sunday and flames engulfed the food court, which was packed with visitors. Later, the fire engulfed other floors too and the debris started falling on the floor where the calligraphy exhibition was under way.

The grief-stricken artist narrated his pain, saying he used gold foil to design these artworks and it took him years to finish.

Despite the huge fire, rescue teams safely evacuated people and no major injuries were reported. Local media reported that rescue and fire-fighting teams arrived at the scene moments after the fire was reported.

Some reports suggest that fire was first reported in the food court on the fourth floor, in the kitchen of one of the restaurants. Experts said the fire could have been the result of a short-circuiting or a gas cylinder explosion.

ISLAMABAD – A huge fire broke out at Centaurus Mall in Islamabad on Sunday. No loss of life was reported as ...

The capital administration has ordered an investigation into the fire incident.